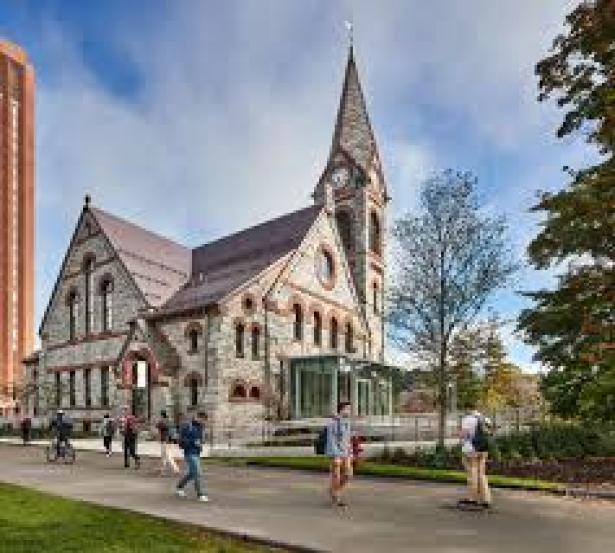 THE UNIVERSITY OF MASSACHUSETTS AMHERST has been so aggressive in recruiting out-of-state students that it’s now easier for those students to gain admission than it is for in-state students, according to a report released on Tuesday.

The analysis, conducted by Boston-based Pioneer Institute, says out-of-state students admitted to UMass Amherst have lower average high school GPAs and SAT scores than in-state students, a finding that calls into question whether the university is fulfilling its mission to Massachusetts residents whose taxes support the school.

“The numbers imply that Massachusetts residents are held to a higher standard for admission,” said the report.

“For parents that are trying to get their kids into UMass Amherst, the flagship campus, it’s certainly troubling that it could be harder for them to get in because they’re in-state rather than out-of-state,” said Mary Connaughton, director of government transparency at Pioneer, a conservative-leaning think tank, and a coauthor of the report.

Connaughton said the report raises the question of whether the shift is part of a deliberate strategy by UMass to draw more young people to Massachusetts to remain and be part of the state economy after graduation, “or is it simply a money grab to get people who pay higher tuition to help their budgets.”

UMass Amherst officials say budget concerns have driven the shift toward more out-of-state students, pointing to a Massachusetts Budget and Policy Center report that found state aid to public higher education, adjusted for inflation, has declined by 14 percent since 2001. “The university’s enrollment of out-of-state students has increased as state support for UMass has stagnated,” UMass spokesman Ed Blaguszewski said in a statement.

Blaguszewski said out-of-state enrollment has been one way to offset declining state aid. He said the nearly 5,000 out-of-state students among the 22,000 undergraduates at the campus are responsible for a “net revenue gain” of $136 million.

The statement did not address the lower admission standards that appear to be in place for out-of-state students.

A copy of the report was sent on Friday to state Education Secretary Jim Peyser, but his office said he has not yet had time to review it.

Connaughton said the effort to woo more out-of-state students, including by applying lower admission standards, might be “a reasonable argument” if those students stay in Massachusetts and contribute to the state’s economy. “But to make that argument we’d like to know what the numbers are and find out if that’s valid,” she said.

The report suggests, however, that accommodating out-of-state students should be a secondary concern of the system. “While a geographically diverse student body is important, the central mission of the University of Massachusetts is to serve the commonwealth’s citizens,” the report says.

The state’s public higher education institutions have faced a double squeeze in recent years: declining state aid amidst increasing enrollments. Not only has state aid to public higher education declined, as the Mass. Budget and Policy Center reported in March, because enrollment in the state system has increased, the cuts led to an even larger 32 percent decrease in funding per enrolled in-state student during that time.

“If those budget pressures are also making it harder for qualified students from Massachusetts to get into UMass, that’s an additional reason to make sure our higher education system is properly funded,” said Noah Berger, president of the liberal-leaning think tank. He said the cuts – and accompanying increases in tuition and fees at UMass – have come in the wake of a series of large tax cuts enacted in 2001.

“The lack of state support is a big key,” said Heather Rowan-Kenyon, an associate professor at the Lynch School of Education at Boston College. Public higher education institutions “are trying to figure out how to make ends meet to meet the needs of the greatest number of students in Massachusetts, and this could be one of those ways,” she said.

Without the higher tuition and fee payments from an expanding share of out-of-state students, she said, the UMass system would likely have been forced to increase costs for in-state students even more than has been the case in recent years.

Connaughton acknowledged the budget pressure at UMass, but said the university should be looking at its cost structure. She said administrative costs in the system have been rising at a much higher rate than faculty salaries and other direct education costs. “What we would prefer to see is cutting back on some of the administrative costs,” she said.

The report said outcry over similar patterns of increasing out-of-state enrollment have prompted other state universities, including the University of North Carolina and the University of California, to impose caps on out-of-state enrollment. Both systems have imposed an 18 percent ceiling on nonresident student enrollment. The report said a similar cap in the UMass system might be in order.