labor Maritime Workers Wonder: Will There Be a Next Generation?

Seattle owes its existence to the waterfront. But, in a city looking past heavier industries to a future powered by tech and service work, maritime workers and business owners wonder how long they will remain a vibrant part of the cityscape.

Seattle owes its existence to the waterfront. But, in a city looking past heavier industries to a future powered by tech and service work, maritime workers and business owners wonder how long they will remain a vibrant part of the cityscape.

For now, though, most of them remain very much part of Seattle or its nearby neighbors. Here are some of their stories in photos.

After a century in Seattle, seafood distributor Ocean Beauty moved its salmon processing plant to Renton earlier this year, and about 135 jobs went with it. 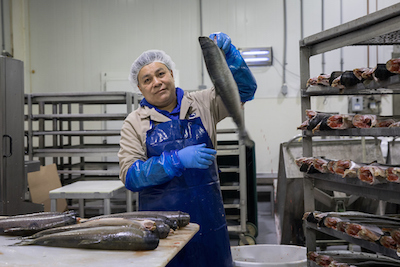 Seattle’s ceaseless traffic drove the company from its plant on the south shore of the Lake Washington Ship Canal near the Ballard Bridge. With three trucks a day heading to Sea-Tac International Airport, the travel time was too great.

“Business was growing and the company needed to expand,” Ocean Beauty’s Tom Sunderland said. “We could have remodeled the [Seattle] location, but it would still take an hour to get to the airport.”

As the urban landscape transforms, Seattle’s maritime sector struggles to adapt on the land it already occupies. The sawmills and canneries that dotted Elliott Bay were swept away as the city evolved into a major gateway to Asia with a containerized shipping port. Now, shipyards – vital to maritime industry – continue their work even as condos and apartment towers rise near the waterfront industrial belts. One of the world’s largest ferry systems continues to connect cities separated by water, sharing Puget Sound with a stream of freighters and yachts 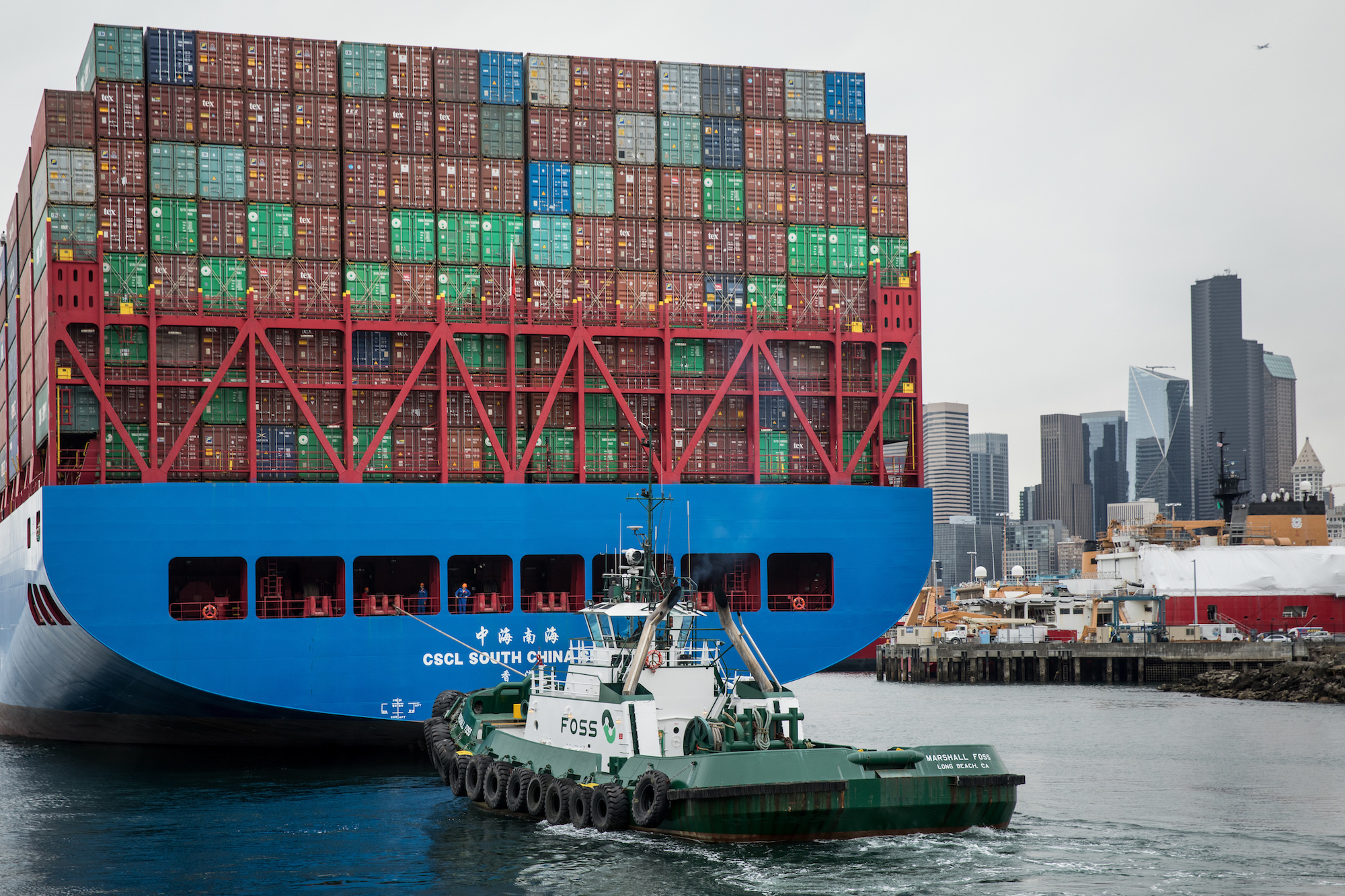 Foss Maritime’s green and white tugs have worked Puget Sound since 1889, when Thea Foss and her husband began working the Tacoma waterways. Today the tugs escort mega-ships from Asia around Seattle's harbor. 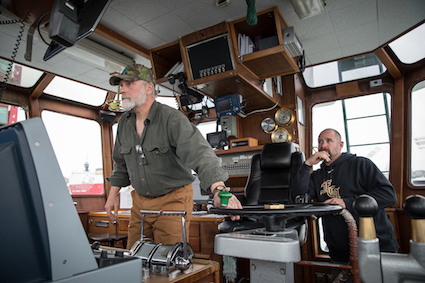 One tug can pull a cargo ship around a harbor, but more are used simultaneously to delicately maneuver the massive container ships. The two-person crew on the Andrew Foss – Capt. Gary Sorensen, left, and crewmember Jason Hudkins – had the easier task recently. They pressed against the Hong Kong-ported South China Sea, a cargo carrier able to carry over 100,000 tons, as it left the terminal; two other tugs tied up in the front and back slowly pried the vessel away from the pier.

Foss, a workhorse of the waterfront, wants to grow in Seattle. But, as condos begin to line the shipyard, the company realizes it is going to have to adapt.

“We’re working to become an urban shipyard,” said Jon Hie, Foss director of shipyard operations. To Hie, that means containment. Many operations will move indoors to reduce the noise and visual clutter that comes with an outdoor shipyard. 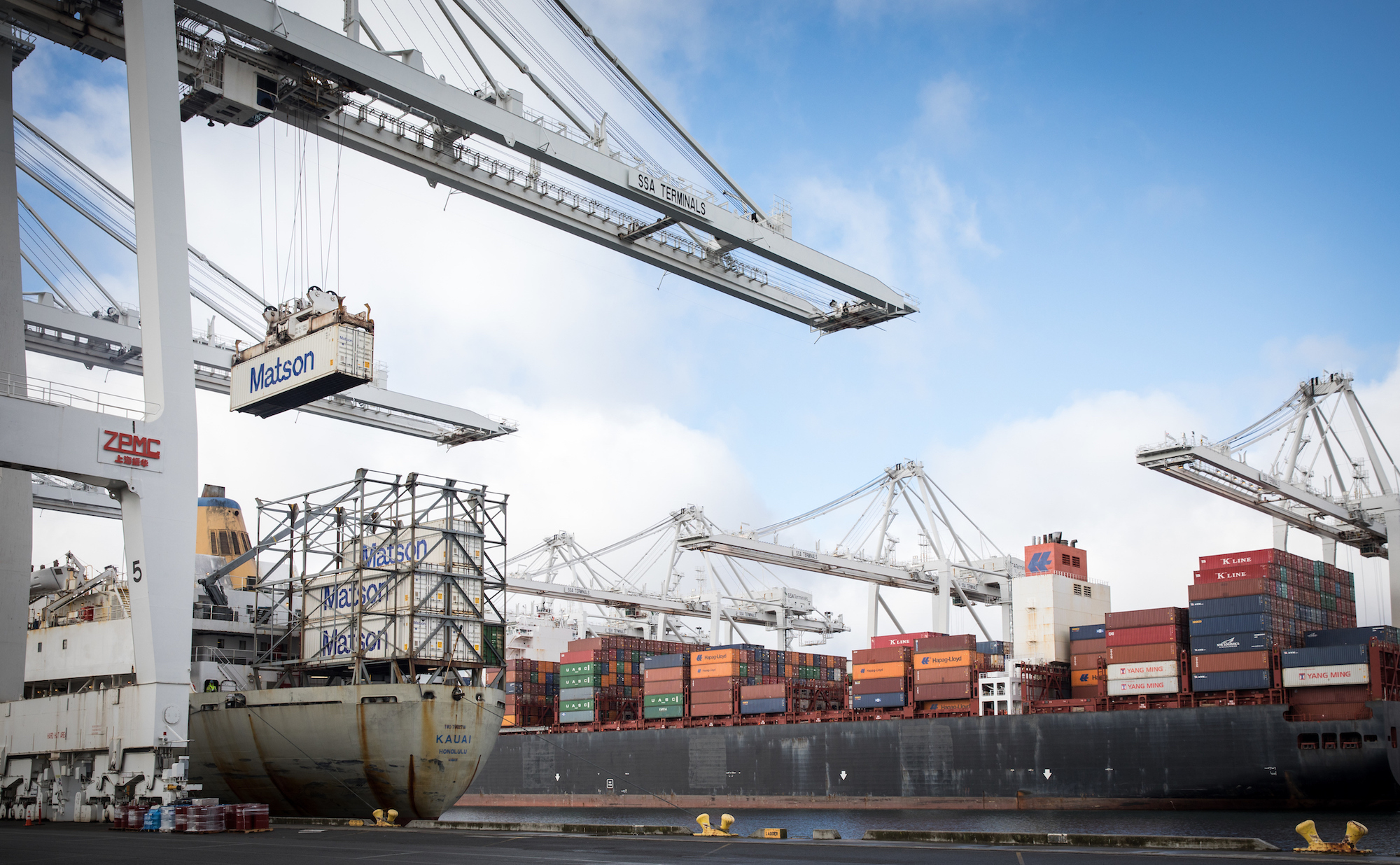 Despite the pressure, many parts of the maritime industry are flourishing. Shipping has remained strong, thanks in part to the Puget Sound’s proximity to China and Japan. Taken together, the Port of Seattle and the Port of Tacoma comprise the fourth-largest container gateway in North America; in 2017, nearly 2,000 vessels called on the ports, moving 3.6 million tons of cargo. Top imports included machinery, auto parts, furniture, clothing and toys. Top exports included machinery, produce, meat, fish and chemicals.

On Seattle’s Terminal 30, crews of roughly 45 people unload a container ship. A carefully synchronized dance plays out as crane operators grab the containers, also known as “cans,” from the ships and place them on trailers. Truck drivers then whisk the cans to the appropriate stack, where a top-handler shifts them off the semi-truck. Drivers then circle back for the next load. 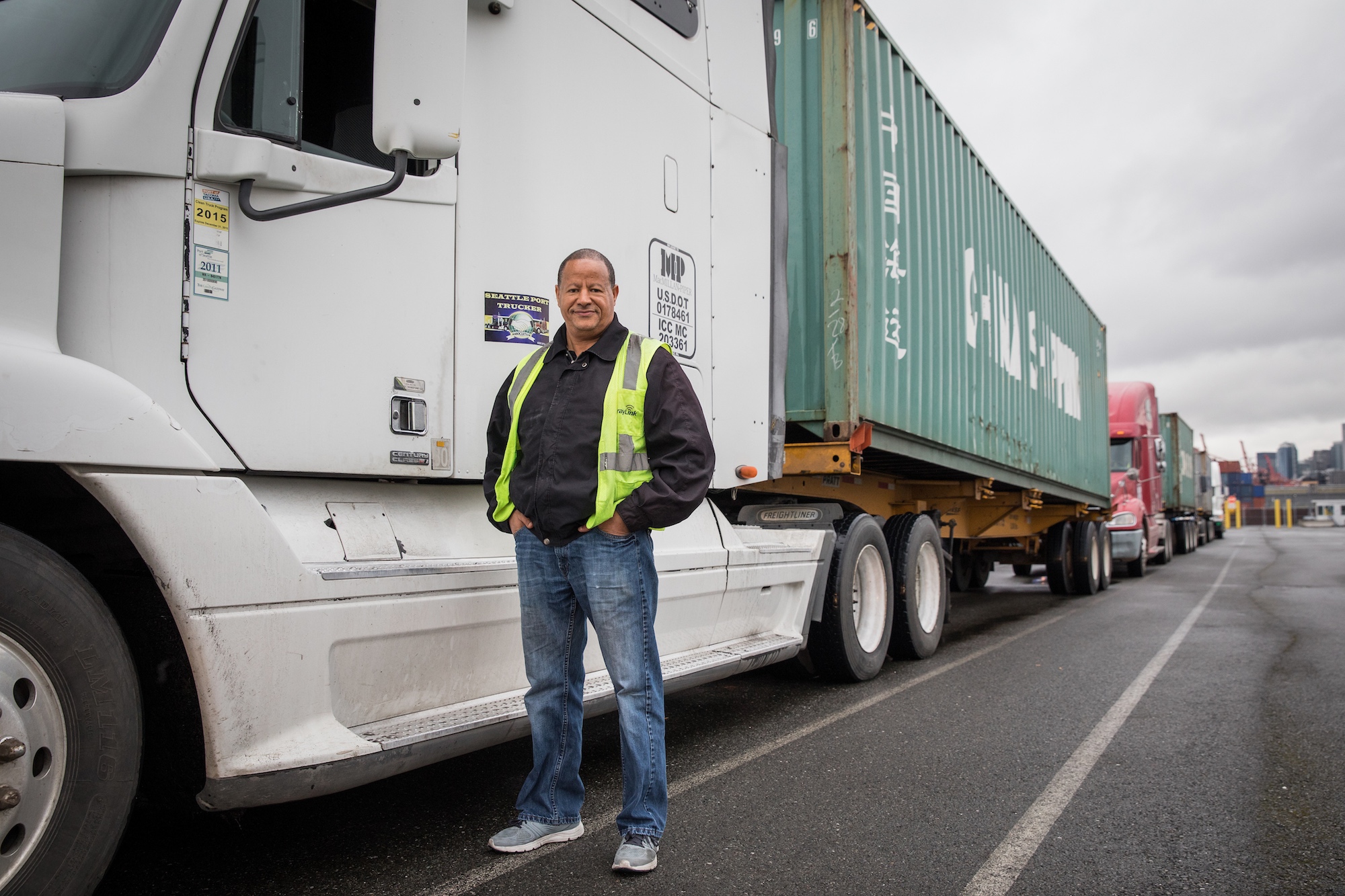 Eventually the containers will head east or south driven by truck drivers like Shimeles Jorga, pictured above, or placed on trains. Before containerized shipping, cargo was moved by hand. The process was so slow ships often spent more time at the dock than at sea. Containerization accelerated shipping while cutting demand for longshoremen. Heavy machinery — cranes, top-handlers, semis — replaced workers. Today, most ships are unloaded in a day or two.

“The industry is growing, but not the number of jobs,” said Max Vekich, a former state representative and president of a Seattle longshoreman’s union local. 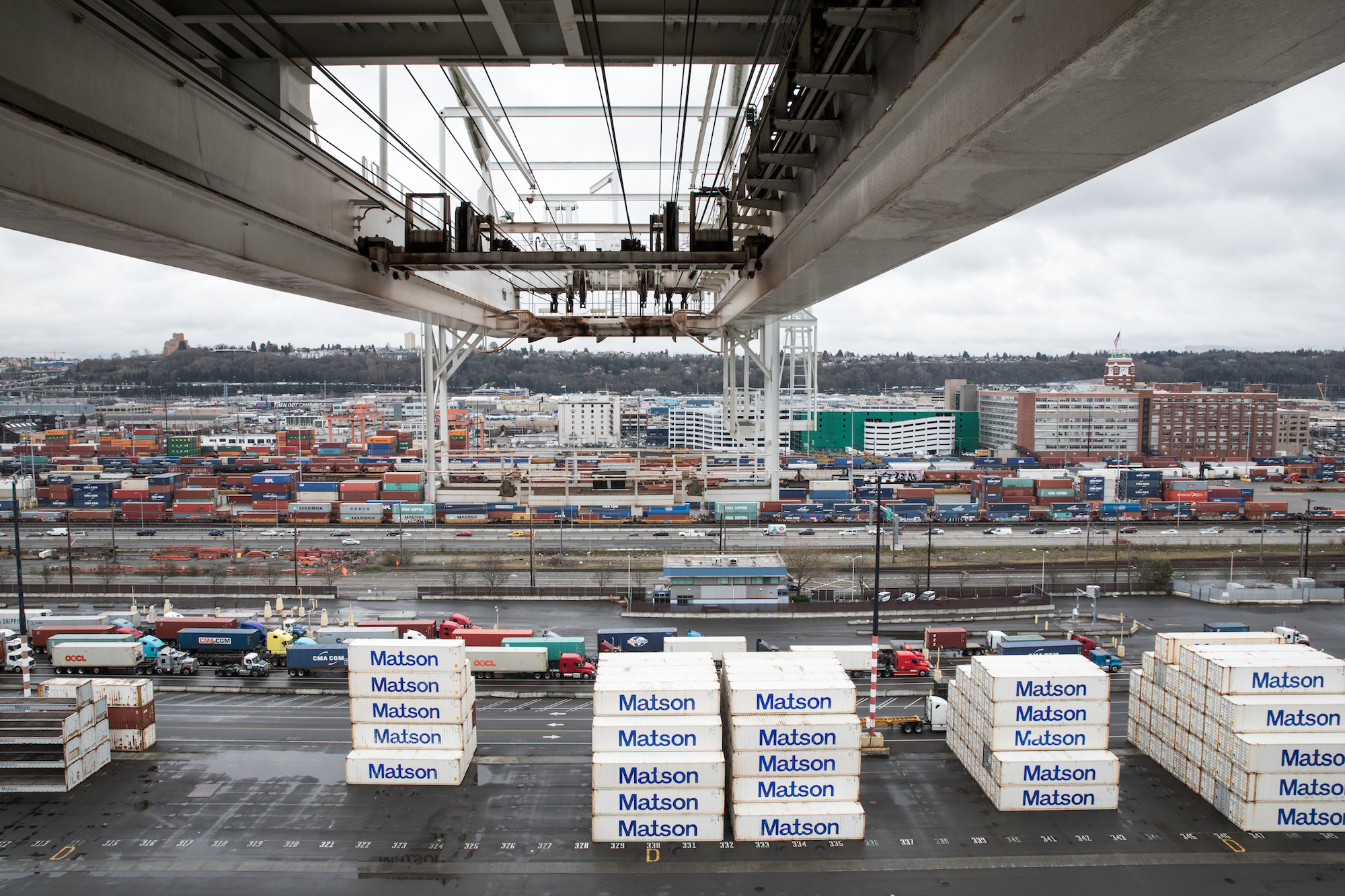 Soon even those jobs may be done by robots. At the same time, shipping vessels are growing larger. Seattle’s deep-water port can handle the largest vessels, ships that stretch 1,310 feet — longer than two Space Needles. These vessels haul twice the cargo of most ships calling on Washington ports today. Ports in Seattle and Tacoma are modernizing to handle the larger load. 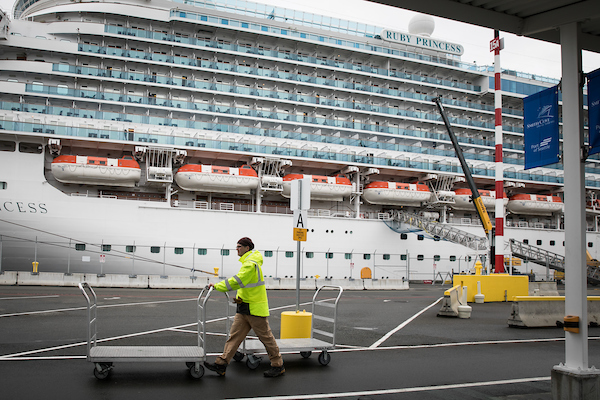 An enormous leap in cruise ship traffic has made up for some of the work lost elsewhere on the waterfront. The number of cruise passengers passing through Seattle has grown 800 percent since 2000, from 120,000 then to more than a million passengers in 2017. 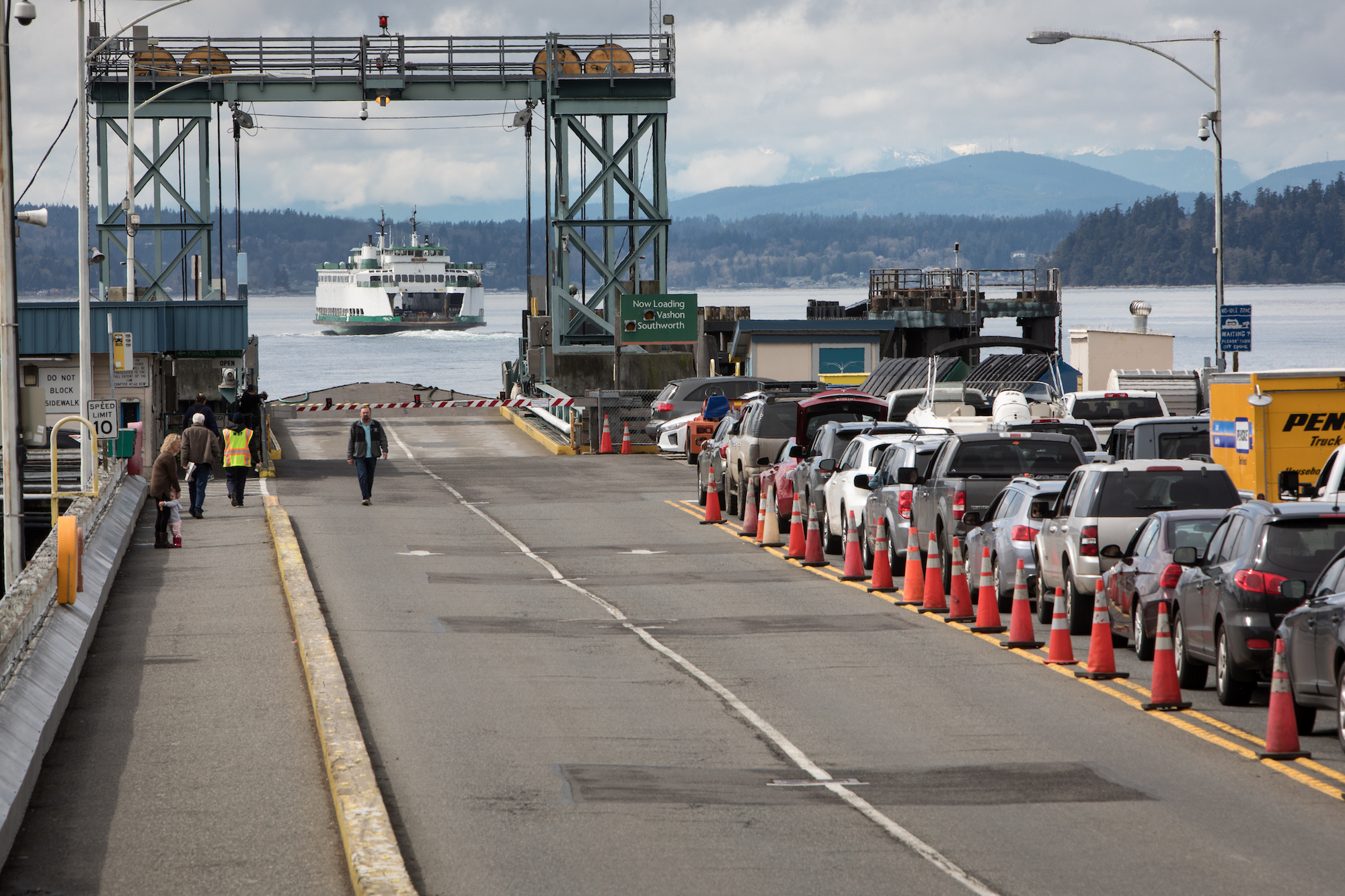 When the state Department of Transportation took over the ferry system in 1951, the agency’s plan was to run the ferries until a series of cross-Sound bridges were built. Not one bridge materialized, and the ferry system ranks as the largest in the country and in the top five worldwide. In 2016, Washington State Ferries carried 24 million riders and 11 million vehicles on 11 routes. 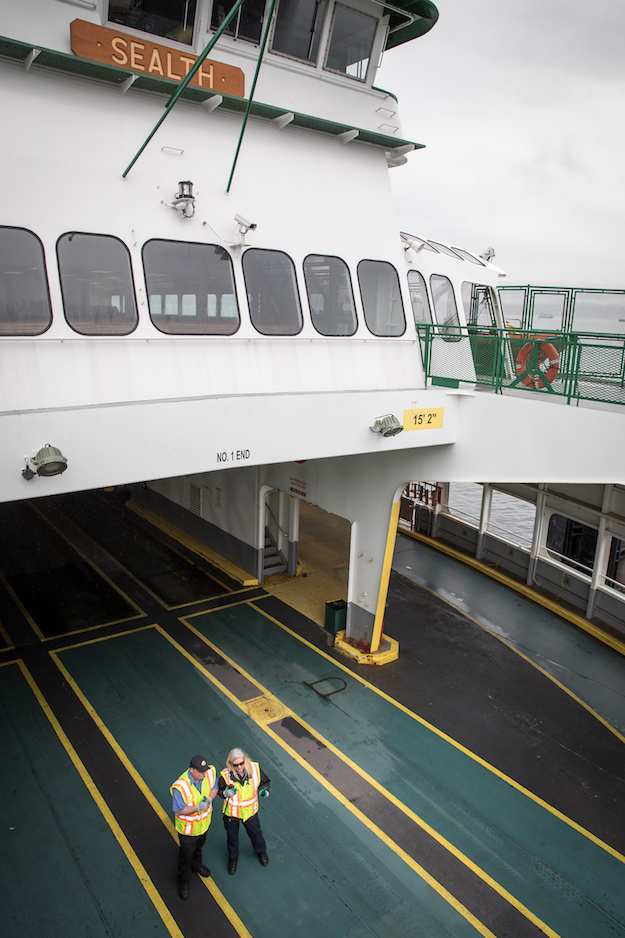 Like much of the rest of the maritime industry, the ferry system is struggling to attract a new generation of workers. As the Transportation Department forecasts ridership to grow 30 percent by 2040, a wave of retirements could keep boats tied up at the dock. About 40 percent of ferry system employees — including nearly 90 percent of ferry captains — will be eligible for retirement in the next decade. 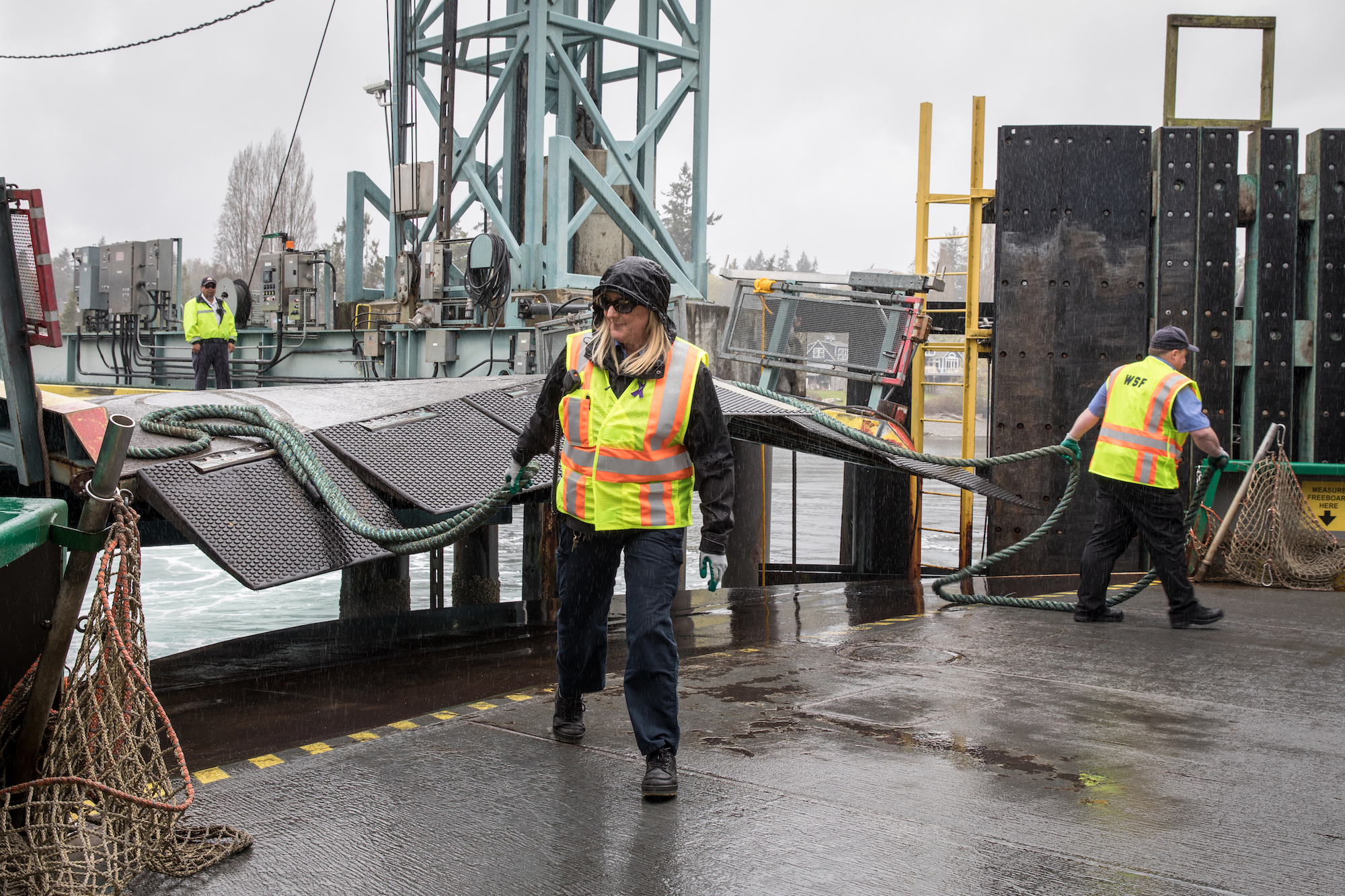 Future captains start at the bottom, cleaning toilets and loading vehicles as entry-level crew members. From the start, though, the job is more than just loading cars and sweeping floors.

“We were even trained on how to deliver a baby,” said Stacy Eliot, pictured above, one of 11 crew members working the midday-to-evening shift on the Fauntleroy-Vashon-Southworth route. Eliot also received firefighting training before she started working on the ferry as a deckhand.

After spending a year and a half of training, Eliot is part of the most recent graduating class of mates. To earn her license, Eliot said she learned to chart every ferry route down to the smallest detail, including every light that lines each route. As a mate, she is one step below captain. 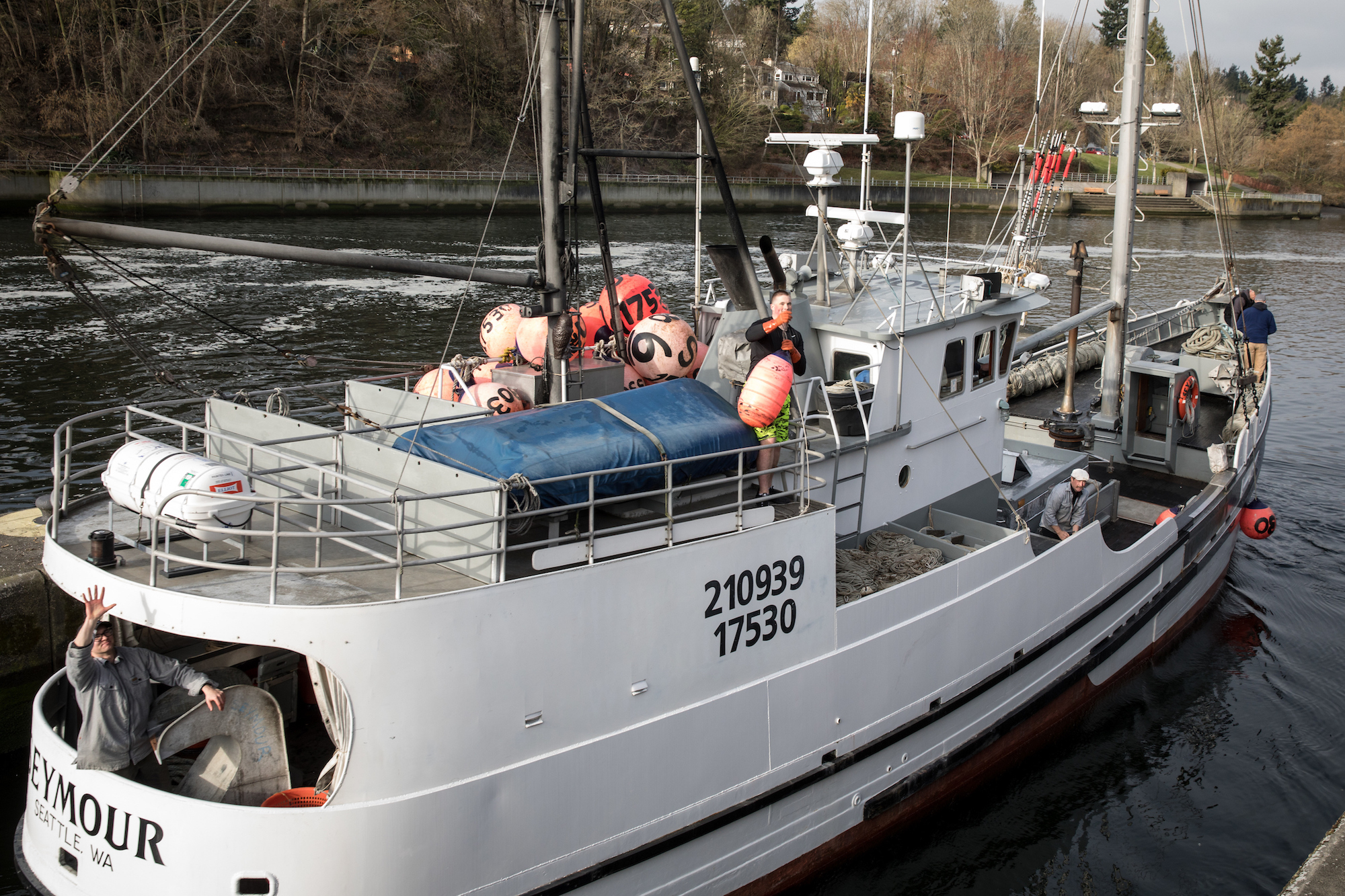 Since early in the 20th century, halibut fishermen have been yelling their goodbyes as they left Seattle to fish the Gulf of Alaska.

The Seymour has changed little since it was built in 1913, although modern technology now fills the wheelhouse. The halibut industry shifted dramatically in the 1990s, when the fishery was regulated to make it safer and more sustainable. Before the current quota system was established, chaotic derby-style seasons saw boats race to capture as many fish as possible. 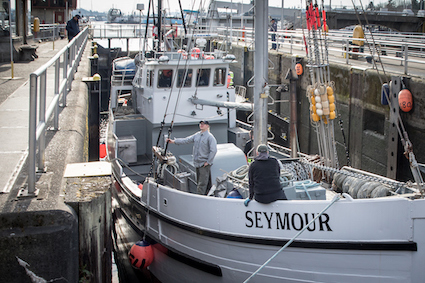 “We would go out just jacked on these one- and two-day pulse openings, setting more lines than we could possibly get in. You’re not handling the fish properly,” said John McHenry, the now-retired owner of the Seymour. “The last derby opening we made was in a storm; I don’t know how many people died during that opening. It was very violent. … There was just too many of us, too many boats.” 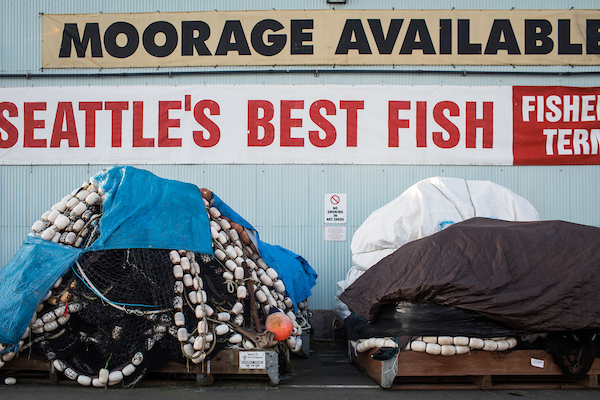 The next generation of halibut fishermen — which includes McHenry’s son, Jack — is closely tracking the collapse of fisheries off the country’s eastern shore.

“Look what’s happened on the East Coast,” said Jim Johnson, executive director of the Deep Sea Fishermen's Union. “It’s a resource to exploit and damn the torpedoes. … We are very serious about the sustainability of the fisheries.”

But even as growth squeezes the working waterfront, maritime industries hold on.

“It’s always going to be a viable port city, providing the existing land along the shoreline remains industrial lands,” said Vince O'Halloran, a representative of the Sailors' Union of the Pacific.

But he warns, “It’s low-hanging fruit for real estate developers that want to build condos and have a lot of money to spend.”