The governors of Maryland, Delaware, Massachusetts, New York, Rhode Island, Connecticut, Virginia and North Carolina declared that their soldiers would not help to secure the United States’ border with Mexico, adding their names to widening outrage 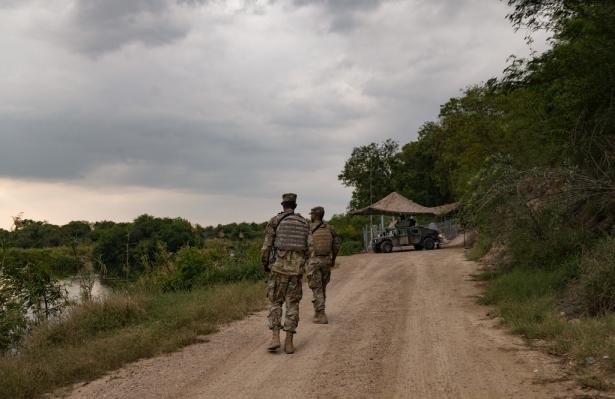 Image Members of the United States National Guard in April near the border with Mexico in South Texas., Lynsey Addario for The New York Times

National Guard troops from eight states will be withheld or recalled from the southern border, the states’ governors announced this week, over mounting objections to the Trump administration’s policy of separating children from their parents there.

The governors of Maryland, Delaware, Massachusetts, New York, Rhode Island, Connecticut, Virginia and North Carolina declared that their soldiers would not help to secure the United States’ border with Mexico, adding their names to widening outrage over the policy.

President Trump called in April for the National Guard to be deployed to the border, saying that thousands of troops were needed to stanch illegal crossings, even though they are at a 46-year low. Few governors outside the Southwest immediately embraced the plan.

“Until this policy of separating children from their families has been rescinded, Maryland will not deploy any National Guard resources to the border,” Gov. Larry Hogan of Maryland, a Republican, said on Tuesday. “Earlier this morning, I ordered our four crew members & helicopter to immediately return from where they were stationed in New Mexico.”

Governor Hogan and several of the other governors who released statements are up for re-election this year. Their decisions, while all in defiance of Mr. Trump’s immigration crackdown at the border, were largely symbolic, as their states were not among those that had been planning to send large numbers of troops in the first place.

Gov. Ralph S. Northam of Virginia said Tuesday that he was recalling four National Guard soldiers and one helicopter from Arizona.

“As long as the Trump administration continues to enforce this inhumane policy, Virginia will not devote any resource to border enforcement actions that could actively or tacitly support it,” Governor Northam, a Democrat, said in a statement.

Gov. John Carney of Delaware said he had been asked on Tuesday to send troops to the border and had declined.

“Under normal circumstances, we wouldn’t hesitate to answer the call,” said Governor Carney, a Democrat. “But given what we know about the policies currently in effect at the border, I can’t in good conscience send Delawareans to help with that mission.”

Gov. Roy Cooper of North Carolina, a Democrat, said he would recall the three members of his state’s National Guard stationed at the border.

“The cruel policy of tearing children away from their parents requires a strong response,” he said Tuesday.

Gov. Gina M. Raimondo of Rhode Island said Tuesday that she would not send soldiers to the border if asked.

“The Trump administration’s family separation policy is immoral, unjust and un-American,” Governor Raimondo, a Democrat, said in a news release. “I will not deploy units from the Rhode Island National Guard to the southern border to support the administration’s policy that is ripping families apart.”

Gov. Charlie Baker of Massachusetts, who, like Governor Hogan, is a Republican in a left-leaning state, had pledged to deploy two Guard troops and a helicopter. But that plan was scrapped.

“It’s cruel and inhumane, and we told the National Guard to hold steady and to not go down to the border, period,” Governor Baker said on Monday.

Gov. Andrew M. Cuomo of New York, a Democrat, said Monday that he would not dispatch troops. “New York will not be party to this inhumane treatment of immigrant families,” he said in a news release.

Gov. Dannel P. Malloy of Connecticut, a Democrat, said he would not deploy troops if his state were asked to participate in anything ”connected to this inhumane practice.”

Also on Monday, the Republican governor of Illinois said he opposed the policy and called on Mr. Trump to immediately halt it. The state did not respond to questions on Tuesday about sending the National Guard to the border.

In Colorado, Gov. John Hickenlooper signed an executive order that barred state resources from being used to help immigration authorities separate children from their parents.

“We are very clear that this is not something that is acceptable,” Governor Hickenlooper, a Democrat, said Monday. “It’s hard for me to imagine that this is happening in the United States of America at the scale it is — at any scale.”

During April and May, federal authorities separated at least 1,995 children from parents facing criminal prosecution for unlawfully crossing the border, the Trump administration announced on Friday. Over the weekend and into this week, the administration’s separation policy has become front-page news and dominated coverage on cable programs, leading members of both parties to express concern.

Mr. Trump and two members of his cabinet have forcefully defended the policy this week, with the president repeatedly making the false accusation that only the Democrats, the minority party, were to blame for it. The law does not require the authorities to separate children.

Before Monday, Massachusetts had joined several states, mostly those in the South and led by Republican leaders, in support of the president’s order to dispatch thousands of troops to the border. In Texas, which shares a 1,200-mile border with Mexico, Gov. Greg Abbott has pledged up to 1,400 troops, the largest contingent of all the states. The Defense Department has authorized up to 4,000 soldiers to be assigned to the border.

Several governors refused the request at the outset. Gov. Kate Brown of Oregon, a Democrat, and Gov. Phil Scott of Vermont, a Republican, both said days after Mr. Trump’s order that they would not comply if they were asked to send troops. Gov. Jerry Brown of California, a Democrat, dispatched some soldiers to his southern border but limited their roles, angering the president.