Ice was created as part of the response to 9/11. There is no fix for an agency that was designed tear families and communities apart with little oversight. 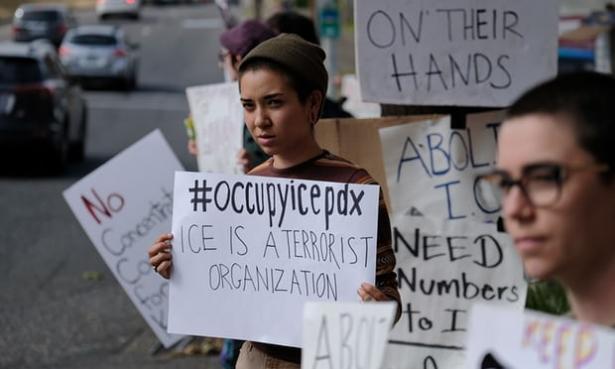 There is no reforming an organization based on the idea that mass deportations make us safer., Alex Milan Tracy/Sipa USA/REX/Shutterstock

Every day I live with the terror that my husband Ravi will be taken away from me and permanently exiled from his home in the United States, where he has lived for almost 25 years.

Ravi is facing deportation because of a criminal conviction for wire fraud from almost 20 years ago, back when he had a green card. As a longtime immigration lawyer and immigrants’ rights advocate, I know our immigration laws are unforgiving. Just about anyone who has a criminal conviction is subject to deportation, without the possibility of ever returning. Ravi is one of thousands facing deportation for this reason, many of whom have been living in the US with permission for years.

Much of what I am living through, along with these thousands of other families, feels like a battle – we are in a fight for our lives. Under the Trump administration, Immigration and Customs Enforcement (Ice) has dramatically escalated its tactics. There were more than 143,000 immigration arrests in 2017, a 41% increase from the previous year. Rather than using discretion to allow people to remain in the US, Ice ignores things like humanitarian need, family and community ties, and letters of support. Instead people are methodically and heartlessly torn away from their homes, often in the middle of the night.

In the last several weeks, over 2,000 children have been ripped away from their parents and detained across the US under the Trump administration’s “zero-tolerance” policy, a practice denounced as a human rights violation by the United Nations. Now the administration is trying to detain families indefinitely. Countless families across the country are living with the trauma of having a loved one snatched away, with barely time to react.

Many people across the country have seen Ice’s destructive practices and have called for reforms. Both my personal and professional experiences have led me to believe that this is not sufficient. There is no fix for an agency that was designed to tear apart families and communities and with very little oversight or accountability. There is no reforming an organization based on the idea that mass deportations make us safer. Ice itself must be abolished.

‘Much of what I am living through, along with these thousands of other families, feels like a battle – we are in a fight for our lives.’ Photograph: Alex Milan Tracy/Sipa USA/REX/Shutterstock

Ice is a relatively new agency. It was created in 2003 as part of a government response to 9/11 that included mass surveillance, racial profiling and militarism. Housed within the Department of Homeland Security (DHS), Ice was positioned to view immigrants as a security threat, rather than as an integral part of communities. Now the agency has over 20,000 employees and an annual budget of approximately $6bn.

Before 2003, immigration enforcement was the responsibility of the Immigration and Naturalization Service (INS). After the creation of DHS, INS was divided into three separate agencies – Ice, US Citizenship and Immigration Services, and Customs and Border Protection (CBP). Although there were significant problems with INS and its immigration enforcement, it did not have as big a budget or as broad a mandate as Ice and CBP, nor the same level of brutality and lack of accountability.

In Ravi’s case, as in so many others, Ice has done its best to avoid accountability at all costs. When the agency refused to issue a stay of deportation and we challenged them in court, they said that the court has no jurisdiction over their decisions. When Ice detained Ravi and members of Congress asked for his release, Ice ignored the request. When hundreds rally to ask Ice not to deport someone, Ice will often deport that person even more quickly. When immigrants are actively and publicly challenging Ice practices, they or their family members are targeted for deportation to keep them quiet.

Who does this behavior benefit? Certainly not communities that are torn apart by these actions. Not taxpayers, who are seeing billions of dollars funneled toward a rogue law enforcement agency rather than towards things we actually need for safe and secure communities – schools, housing, jobs, healthcare and infrastructure. And not Congress, whose directives Ice has routinely ignored.

Suggesting the abolition of a government agency may seem like a radical idea, but it’s actually not that uncommon. Donald Trump himself proposed eliminating 19 government agencies in his first federal budget blueprint, even though those agencies actually benefited our communities. Both Democrats and Republicans have proposed eliminating the Commerce Department. And dozens of federal agencies have been created and dissolved as conditions and politics have changed over time.

It’s not a question of whether Ice can be abolished, but of how we can generate the political will to make it happen.

Already, many are calling on their members of Congress to speak out publicly about the need to shut down the agency. Several candidates have even endorsed the idea. But individuals and municipalities are not just waiting for Congress to act; they are also taking action. Hundreds of counties across the country have passed policies to limit local law enforcement’s collusion with Ice, as has the state of California. And a national grassroots mobilization has called on Congress to defund the agency because of its anti-immigration agenda.

Some may question who will perform the duties of Ice if it is abolished. But are those duties essential to sustaining strong communities? In my experience, they often do the opposite. They do not protect national security, they do not decrease crime and they do not make us safer. What makes us safer are communities that have access to basic services, including education, healthcare and jobs, and where loved ones can stay together.

Deportation is a form of exile. If Ravi is deported, he will be permanently refused entry to the US. He will never be able to return to our home, to our community, to his job, to the people who have held us up during this long struggle. And we are one family among thousands. An agency that enshrines and increases this arbitrary cruelty should not be preserved.

Fortunately, the tide is turning. People across the country are outraged, and are standing up for accountability, for human rights, for family unity. It’s time for Congress to stand with their constituents and demand an end to the Immigration and Customs Enforcement. Abolishing an agency that shatters communities is a first step toward creating a more just world.