'All Humanity Has Left the Area': Paying for Tesla's Gigafactory 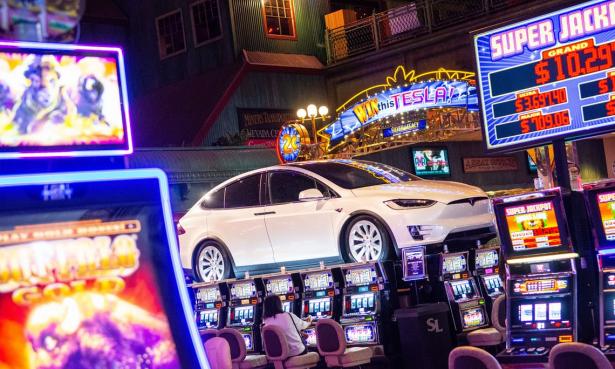 Nevada is the gambling capital of America – and has played a high stakes game by using huge tax subsidies to attract Tesla’s Gigafactory, David Calvert for the Guardian

When Nevada enticed Tesla to set up a gargantuan battery factory in the desert, America’s gambling capital seemed to have hit the jackpot.

The factory would have a state-of-the art 5.5m sq ft (510967 sq meter) facility – reputedly the world’s biggest building by footprint – and promised to generate tens of thousands of jobs, as well as investment worth $100bn (£76bn).

Cities around the so-called Gigafactory in northern Nevada lined up to reap the bonanza. No longer dusty, provincial versions of Las Vegas, these municipalities would become innovative makers of lithium-ion batteries for electric cars and partners in Elon Musk’s vision of a clean-energy revolution.

That was the pitch.

“I’m not used to living this way,” said Katherine Pope, 69, a retired administrator who rents a small motel room and relies on food donations. “I can’t afford to move. Many times I can’t afford meat.”

Another impoverished resident, a 70-year-old unemployed transcriptionist with a thyroid condition, faces a recurring dilemma. “Food or medicine, it’s one or the other.” A rent increase may soon compel another grim choice: sleep in her battered 1997 Saturn or in a homeless shelter.

Down by the Truckee river you find others who feel cast out – families who have moved into trailer parks, which are packed to capacity, and people sleeping rough.

“A year ago I was the caretaker of an apartment building and my wife was a caregiver. Then I lost my job. We couldn’t afford to rent anywhere so now we live here,” said Kevin McCullough, 48, who like his partner, Pixie, was sunburnt from outdoor living. Home is a tent by riverbank reeds.

Such testimony conflicts with the official narrative that Sparks is booming – awash with jobs, money and newcomers. But you hear it from a largely hidden underclass which is paying a price for the boom. Some have a term for it: “Tesla’d.”

One complaint is that tax credits given to Tesla – and to a lesser extent other tech companies – deplete public services, resulting in potholed roads, overcrowded schools and insufficient affordable housing.

The other is that the tech worker influx has sent rents rocketing, tipping residents on fixed incomes, especially seniors, into penury.

A largely hidden underclass is paying a price for the boom. Some have a term for it: 'Tesla’d'

That was not the pitch in 2014 when Nevada beat rival bids from California and New Mexico to land the Gigafactory. It did so with exemptions from sales-and-use, property and general business taxes for 10 to 20 years, adding up to an estimated and unprecedented $1.4bn. The previous record, to lure an Apple server farm, was $88m.

Brian Sandoval, the Republican governor, hailed the deal as transformative for a region still limping from the great recession.

Today the factory sits behind a fenced swath of desert known as the Tahoe Reno Industrial Center (TRIC), which also hosts Google, Switch and Panasonic, among others, and bills itself the world’s biggest industrial park. 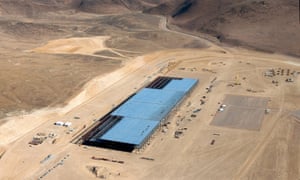 The Tesla Gigafactory – reputedly the world biggest building by footprint – during construction in 2015. Photograph: James Glover/Reuters

Tesla’s “alien dreadnought” – Musk’s words – dominates. It is unfinished but already produces around 3,000 battery packs per week for Tesla’s Model 3 sedan. Thousands of workers and contractors have moved to Sparks and nearby communities, a boon for local hotels, landlords, builders, plumbers, electricians, taxi drivers and other service providers.

Current Tesla projections suggest the credits are justified even if the ultimate cost is unclear, said Knecht. “If it pans out the way it looks, it’ll certainly be good for the economy. The state may break even but we’ll never really know.”

A Republican, Knecht’s job is to protect taxpayers’ money. Figures from his office, supplied under a mandate for transparency in corporate welfare, show how much tax abatements reduced potential revenues for local authorities in fiscal year 2017. In the case of Tesla it was $68.7m.

Credits to Musk’s company will soak up most of a tax revenue excess Nevada was due to record this year.

The state compensates local government, said Knecht. Had Tesla never come there would have been nothing to tax, so the cost/benefit remains murky. “You can get numbers all over the place.”

Here’s one number that applies to Sparks: zero.

Stephen Driscoll, the city manager, said despite surging population growth and increased strain on police and fire departments and schools, his annual budget had increased from $65m to $70m in the past two years – about the level of inflation. “So I’m at net zero.”

Critics of the system say there is no doubt who ultimately pays.

Schools in Washoe county, which includes Sparks, are overcrowded and deeply in debt, so much so that voters in 2016 approved a sales tax hike to help plug the gap. Even so, fresh budget cuts could eliminate bus routes for nearly 4,000 elementary and middle school students in an effort to save $550,000.

Tesla, meanwhile, has sold $131m in tax credits to casinos thanks to transferable tax credits – the cherry on the cake used to lure Musk.

“Corporate welfare is a way of life in these parts,” said Andrew Barbano, a veteran commentator. Ordinary people bore the brunt in the form of regressive sales and gas taxes and impoverished services, he said. “Nevada is addicted to hidden indirect taxes.”

Robert Fellner, of the Nevada Policy Research Institute, said politicians had warped incentives. Rather than create a fair tax system and balanced growth they wanted to be able to point at giant factories and say “we did that”.

Jenny Brekhus, a city planner and member of Reno city council, said Nevada could not afford corporate welfare. “I don’t believe you can be a low tax, low service state and play this economic development game where you give away tax revenue.”

In Sparks the result is a stark gap between winners and losers.

Home owners have seen values soar – but not property taxes, which are capped. Plumbers, electricians and builders have bountiful job options.

“The factory is a good thing,” said Omar Alvarez, 28, a building contractor who earned $18 an hour plus generous benefits at Tesla’s factory. “Well, as long as you actually work there.”

Residents on fixed incomes, in contrast, are facing surging rents, driving some to destitution and the brink of homelessness.

“I get depressed. All humanity has left the area,” said Pope, who used to work in an architect’s office. Her $700 per month ground-floor motel room is a dramatic comedown from her previous apartments. “But I’m grateful this place exists.” 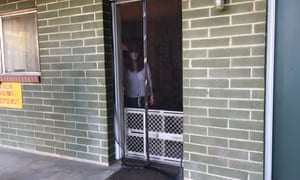 As rents rise in Sparks, more residents are being forced into temporary accommodation such as motel rooms. Photograph: Rory Carroll for the Guardian

The unemployed transcriptionist declined to be named lest identification sabotage her last-ditch attempt to avoid eviction. Asked to name unaffordable luxuries, she replied: “Ice cream. Bacon. A movie ticket.”

Having bet on the Gigafactory, the city’s fate hinges on the company’s success, said Richard Daly, business manager of Laborers’ Union Local 169. “Growth problems are better than recession problems.”

But a spate of setbacks – layoffs, a churn of executives, workplace safety complaints, “autopilot” car crashes and a suit against a whistleblower – has put pressure on the firm. “Giving so much to Tesla was risky,” said Eloy Jara, another labour leader. “If they fail it could really hurt.”