Today, she says, roadsides are dotted with “for sale” signs. Farms sit vacant, their owners having relocated to urban areas in search of work.Once-pristine barns have become dilapidated after years of low prices left farmers without money for repairs 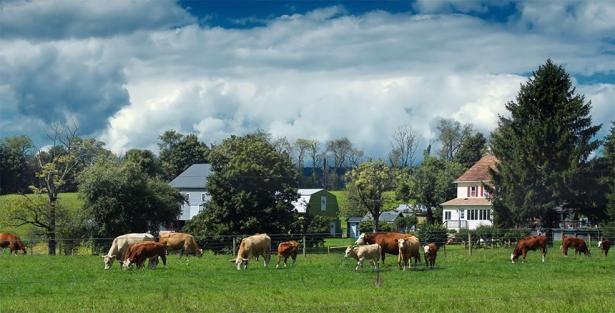 When Lorraine Lewandrowski drives from her Herkimer County dairy farm to her law office each day, she notices the changes happening across rural upstate New York. “When I grew up here, we had 30 or 40 farms in our neighborhood,” she says. “We had a local hardware store, machinery dealers, two dentists, two doctors. We had a vibrant rural town. Now we don’t have that.”

Today, she says, roadsides are dotted with “for sale” signs. Farms sit vacant, their owners having relocated to urban areas in search of work. Once-pristine barns have become dilapidated after years of low prices left farmers without money for infrastructure upkeep. The closest city, Utica, is the sixth-most distressed city in the country, with about half of the adults unemployed and more than a quarter of the population living in poverty.

Depressed farm prices are impacting farmers across industries nationwide. Since 2013, farm income has fallen by more than 50 percent, and median farm income for 2018 is projected to be negative (-$1,316, to be exact). But dairy farmers are arguably being hit the hardest, as they face a fourth year of milk prices that are well below the cost of production. The resulting stress has become so pronounced that the Agri-Mark Dairy Cooperative, which manages milk sales for its member farms, sent farmers suicide hotline numbers along with their milk checks earlier this year.

Today, it costs a farmer approximately $22 to produce a hundredweight, or one hundred pounds, of milk. But the market price for milk is significantly less. While the price of milk constantly fluctuates, farmers are currently paid as low as $15 per hundredweight—30 percent less than the cost of production.

Farmers and organizations are calling on legislators in both the House and the Senate to draft Farm Bill legislation that addresses the current farm crisis. While the U.S. Senate Farm Bill is expected to be introduced as soon as this week, the House version will be brought back to the floor for a second time on June 22, after 30 Republicans joined all 183 Democrats in defeating the bill in May. In a National Family Farm Coalition (NFFC) press release that applauded the defeat of the House Bill, board president and fourth generation dairy farmer Jim Goodman said, “This bill missed a key opportunity to fix the ongoing crisis in the dairy sector and the downturn in the farm economy. With the bill’s defeat, Congress can now go back to work to draft a true bipartisan farm bill—one that is supportive of family farmers, rural communities, SNAP recipients, and the environment.”

The release builds on an April letter that the NFFC—along with 50 other organizations—sent to Secretary of Agriculture Sonny Perdue and Congressional leadership of agriculture committees, demanding that attention be paid to the dairy crisis before more farms are lost. “Small, family-run dairy farms play a vital role in the rural economy while providing a safe, affordable food to consumers. If the current cycle of low prices and contracted dairy markets continues, we will see virtually all of these farms go out of business, with serious impacts on the economic and social health of rural America,” they wrote.

The groups proposed setting an immediate floor price of $20 per hundred pounds of milk, an emergency measure that would rescue dairy farmers on the brink of losing their operations. The groups also proposed a shift in dairy policy to ensure a balance between supply and demand, known as “supply management.”

Supply management policies were first implemented after the Great Depression to stabilize the market. The supply of agricultural products was coordinated, and strategic reserves of commodities were stored to supplement American food supply during times of poor yields. If supply began to overburden reserves, farmers were paid by the federal government to take land out of production to avoid flooding the market.

But in the 1970s, agriculture made a swift about-face. Earl Butz, the Secretary of Agriculture during the Nixon Administration, famously took the approach of “get big or get out.” He encouraged farmers to produce as much as they could and dangled the promise of foreign exports for any overages. The new era encouraged farmers to take out loans to lease more land and buy equipment built for larger scale operations. But increased production led to a dip in prices at the same time that the U.S. enacted a grain embargo against the Soviet Union. The dominos began to fall—market prices crashed, interest rates skyrocketed, loans were called in. By the mid-1980s, the Farm Crisis—the biggest farm crash since the Great Depression—was in full swing. As a result, tens of thousands of farms were lost, and many rural communities experienced a forced exodus of its residents.

Some worry that today’s agricultural recession too closely echoes the lead-up to the 1980s Farm Crisis: oversupply and falling crop prices, rising interest rates, family farms rapidly going out of business, and now a looming trade war that could impact over 90 agricultural exports. And as dairy farmers face a crisis that has reached emergency levels, the idea of supply management is being resurrected, appearing on the lips of farmers and experts as an approach worth discussing. It’s not without controversy, of course. Those opposed to it say the policy allows government to unnecessarily interfere in private marketplaces. But supporters say it would steady the volatile dairy market by keeping milk production in relative balance with demand.

NFFC’s Goodman says, “Supply management is a long term fix. If we really wanted to look forward and say, ‘We don’t want this crisis to happen again… what steps can we take to prevent it?’, then supply management would be one of those.”

Many supporters of supply management point to the success of Canada’s dairy program, in which farms own shares in the market and are required to increase or decrease production according to demand. The group Dairy Farmers of Canada maintains that the system provides farmers “a predictable and stable revenue.” In an email, Lewandrowski wrote, “The Canadians seem to be doing very well for the rural economies with their [supply management] program. Drive around Ontario and you see pretty well maintained farms with new equipment. Drive over the border into rural NY, and you see miles of empty farms, barns falling down, and people struggling to live.”

Mike Eby, Board Chairman of the National Dairy Producers Organization and a former 7th generation dairy farmer from Pennsylvania, says it’s necessary to control the amount of milk in the marketplace, but doesn’t believe it should or will come through government intervention. Instead, Eby thinks the solution lives within dairy cooperatives, which currently represent 80 percent of U.S. produced milk, primarily through memberships with farmers.

Eby says, “Either farmers control the amount of milk they produce, or the excess will control the number of farmers that produce it… We look to the farmer and say you need to own this problem as well, because if you can’t own the problem, you can’t own the solution. In order to own the solution, your only hope in doing so is to utilize the cooperative you already own.” Eby and his colleagues say the cooperatives “are in the perfect position to monitor the marketplace and ask their members to respond accordingly” by producing more or less milk based on demand.

While small and mid-sized dairies are going out of business, the number of bigger farms—including those termed mega-farms or concentrated animal feeding operations (CAFOs)—are growing across industries ranging from hogs to grain, tree nuts, vegetables, eggs, and dairy. And modern agricultural policy is shifting to favor these large producers by favoring anti-regulatory policies and awarding the majority of farm subsidies to the biggest and most lucrative operations. Goodman maintains that Wisconsin’s dairy farmers “have been duped into producing too much milk” through expansion grant programs, laws favoring large dairies, and a commitment by Governor Walker to grow the state’s annual milk production to 30 billion pounds by 2020.

Additionally, as processors get bigger, farms must grow to match the higher demand, or leave the business altogether—a pressure amplified last March, when Wal-Mart announced the construction of their own dairy plant. The announcement resulted in the second-largest dairy company, Dean Foods, abruptly severing contracts with more than 100 dairy farms in eight states. Farmers fear that Wal-Mart’s model will gradually expand across the country, edging small producers out almost entirely.

In January, the USDA reported that the number of licensed dairy farms dropped to 40,000. This represents a 3 percent decline in a single year, and a loss of 17,000 dairy farms—30 percent—over the last decade. But while the number of farms decreased, the number of milk cows and milk production increased. This discrepancy represents the consolidation of the market, a restructuring that has changed the face of agriculture over the last three decades. In a new report, the USDA found that “by 2015, 51 percent of the value of U.S. farm production came from farms with at least $1 million in sales, compared to 31 percent in 1991.”

Goodman says the dairy crisis is hitting the smaller farmers much harder, as larger producers can often afford to weather periods of low prices. “Even if they’re getting paid less per hundred pounds of milk, they can just produce more milk to make up the difference,” he says. “And they’re relying almost entirely on immigrant labor, so they know they can pay a lower wage, which also feeds into things.”

In an interview with Heritage Radio Network, Lewandrowski said, “I would like to ask the processors: How do they ensure sustainability for their farmers who supply them? Most of the processors pay rock bottom prices, and some of them have the farmers bidding down each other. It’s kind of like Hunger Games for farmers.”

Lewandrowski and her sister, who together operate a 60-cow dairy, use the income from their off-farm jobs to supplement their farm income. Lewandrowski works by day as an attorney, and her sister is a large-animal veterinarian. “I’m lucky I have another way to make money,” she tells me. All around her, neighboring farmers are facing increased stress and tough decisions driven by a market with no rebound in sight. “Just about everyone I know has an off-farm job, or is taking on more debt.”

In her work as an attorney, Lewandrowski is “inundated with farmers.” They need help navigating logging or hunting contracts to make extra money, or selling a piece of land, or getting released from their mortgages. She helps with divorces and estate plans. “I just had one farm liquidate their whole herd,” she says, the surest sign that dairy farmers are facing desperate times.

Frustrated by the lack of support for farmers, Lewandrowski has become a vocal presence on social media. She uses it to amplify the realities facing rural communities and, specifically, the stress being felt among dairy farmers. In April, she tweeted to her 25,000 followers:

“Went to Walmart late at night. Kid at cash register told me he’s a dairy farmer, works the night shift to make $.”

“I hang onto happier days ahead. A farmer neighbor collapsed from stress today. We all went over to do the chores.”

“Feeling very bitter today as every last farmer in my area struggles for their life.”

("America's Dairy Farms Are in Crisis and the Farm Bill Won't Help" was originally published on www.talkpoverty.org, and is reposted on Rural America in These Times thanks to their reuse policy.)