There is not enough space to catalogue all the crimes committed collectively by western countries that now feel besieged by migrants of color. 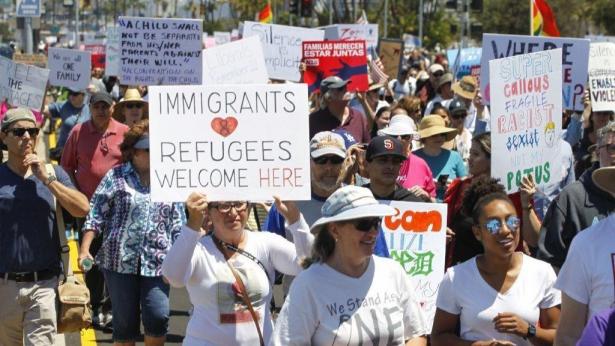 Thousands of people walk down Harbor Drive during the Families Belong Together rally and march in San Diego., Hayne Palmour IV/U-T

A tragic consequence of Donald Trump’s fixation with crimes committed by individualundocumented immigrants is that it overshadows crimes against humanitycommitted by the United States and its western allies. It is also deepening western denial about its long history of criminality against black and brown people in the Global South and the world over. When Bill O’Reilly challenged him about why he indulges murderous autocrats Donald Trump, in a rare moment candor by an American president pushed back: “What, you think our country is so innocent?” But he went further, “There are a lot of killers. We have a lot of killers.” But to hear Trump talk about immigration, white westerners are the victims of invasion and criminality by “illegal” immigrants. This newfound victimology is in sharp contrast to the reality of who has benefited most from the long history of western criminal invasion and economic subjugation that goes back to the Transatlantic slave trade.

It is not clear what examples Trump had in mind, but I would like to offer a short catalogue of western criminal culpability. How about: The aforementioned enslavement of 20 million Africans; the near extermination of Native Americans; violent colonial invasions and economic domination of the black and brown world; U.S. sanctioned bloody coups against democratically elected regimes in Chile, Iran and Congo, among others; the 2014 American-endorsed coup in Honduras; the invasion of Iraq under false pretense and the resulting in the death of nearly a million people; and the invasion of Libya and killing of Muammar Qaddafi. To be sure the crimes listed here were committed against individuals—witness Nelson Mandela’s long incarceration, the murders of Chile’s Salvador Allende, Congo’s Patrice Lumumba and Qaddafi, and the massacre of civilians by government forces in South Africa (Sharpeville and Soweto) other repressive regimes backed by the U.S.—but fundamentally, they were crimes against humanity, a term born out of the Nuremberg Trials.

Donald Trump may parade victims of traffic accidents involving “illegals,” but Americans need to refresh their memories (or learn for the first time) about the long and checkered history of criminality perpetrated by their government in their names—crimes against millions of individuals, societal laws and norms.

There is not enough space to catalogue all the crimes committed collectively by western countries that now feel besieged by migrants of color. Outside the Nazi holocaust, nothing compares to the crime of slavery. Nothing compares to the crime of invasion and domination of other peoples. Nothing compares to the crime of apartheid, under which thousands of black South Africans died at the hands of a setter community that had itself fled religious persecution in Europe! Nothing compares to having your country invaded by a superpower under false pretense and destroyed, as Iraqis know all too well. Nothing compares to having your country destroyed and pillaged under the false flag of liberation, only to be abandoned, as Libyans experienced from their western “liberators.” Libya exemplifies the untended consequences of imperial adventurism. During Qaddafi’s rule, there was no migrant crisis. The country harbored and employed untold numbers of workers from neighboring countries and was effectively a bulwark against the risky Mediterranean crossing to Europe. Now the preponderance of African refugees to Europe originate from the Libyan coast.

The crimes described here were committed by nations and empires, but right wing white nationalists like Donald Trump point fingers and highlight drunk-driving accidents involving undocumented immigrants. We don’t wish to downplay the real pain suffered by survivors of these accidents and occasional murders of American citizens by undocumented residents, but if we are going to have a debate about crime as it relates to immigration, it must be conducted honestly and have a sense of proportionality.

Under pressure to end official hostage-taking at the U.S. southern border, Trump doubled down and revealed that his grievance goes beyond the drunk-drivers: “We cannot allow these people to invade our country!” Pardon me, who exactly has invaded countries? Child refugees from Guatemala, Honduras and El Salvador have become “invaders” of other countries?” Surely, U.S. political leadership can do better than this, and our political discourse can certainly be more serious.