'This is a big win for us.' Cancellation of Sacramento ICE contract part of a national push. 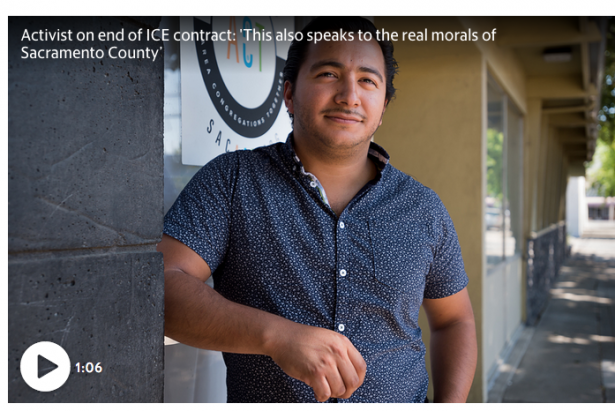 For more than a year, Sacramento activist Carlos Montes-Ponce has been fighting to end the county's ICE contract to hold immigrants in deportation proceedings in a county jail. The Board of Supervisors voted to end the contract Tuesday, June 5. , Paul Kitagaki Jr

A vote by Sacramento County supervisors this week to end a contract allowing U.S. Immigration and Customs Enforcement to rent local jail beds is being celebrated by immigration activists as a major win and a model for national action.

"This represents a pinnacle of triumph, and a beacon of hope for the rest of the tactics we are planning to implement," said Pablo Reyes-Morales, a member of Norcal Resist, a network of trained legal observers focused on immigration issues. "We’re definitely going to try to mimic it."

Richard Morales, director of immigration policy for Faith in Action, a national faith-based social justice network, said his group works to frame the issue of detention contracts as an ethical failing. In Sacramento, its local affiliate, Sacramento Area Congregations Together, has lobbied, rallied and met with officials for more than a year to get its message across.

"It’s morally wrong to be profiting off the suffering of undocumented immigrants, and that is what is happening," Morales said. "A lot of the work that we do is fighting these local contracts and local cooperation. ... We believe that the one way we can slow down the massive deportation machine is by stopping the contracts and the local cooperation."

Supporters of the contract, however, say ending it will mean a loss of money for local law enforcement and more hardship for the families of those inside. They also point out some of those being held while awaiting deportation proceedings have serious criminal convictions for violent felonies, though others have minor convictions for crimes like drug offenses or driving under the influence. Some have no criminal convictions at all.

In Sacramento, Sheriff Scott Jones, who was leading the polls following Tuesday's election, has been an outspoken opponent of California's attempts to legally shield its undocumented immigrant population from federal crackdowns through "sanctuary" policies that limit the ability of local departments like his own to work with federal immigration authorities.

Jones had asked the Board of Supervisors to renew the ICE contract.

The Sacramento County Sheriff's Department has had a contract with ICE to house up to 165 detainees in deportation proceedings at its Rio Cosumnes Correctional Center since 2013.

The contract runs through June 30, 2018, and pays the county $100 per "bed day" per detainee. This fiscal year, the contract is expected to bring the county more than $4 million, according to Sheriff's Department spokesman Sgt. Shaun Hampton.

But Sheriff Scott Jones told the Board in a memo that the average ICE detainee is in the facility 148 days, and renewing the contract could have brought the county up to $6.6 million annually in coming years through increased per-night charges. He was asking for the contract to be extended for an indefinite term.

On Tuesday, Sacramento County Supervisors Don Nottoli, Phil Serna and Patrick Kennedy cast the deciding votes to end the multi-million dollar contract despite that appeal from the Sheriff.

"We’re not housing these people, we are jailing these people," Serna said during comments. "So to have us consider extending a contract that, while it has some fiscal benefit to the county but results in what I think is a quite clear moral abomination ... I don’t want to be party to jailing people when they have no criminal violations. It’s about that simple."

Serna said Wednesday that while he always has been a strong supporter of social justice causes, the moral plea from local activists did affect him.

"Certainly, the activists deserve a lot of credit for really bringing the nuances of the issue to the forefront in terms of what we are being asked to consider with the contract extension," Serna said.

Proponents of the contract, including Supervisors Sue Frost and Susan Peters, argued that it was "humanitarian" to renew the contract because it could allow some detainees to remain closer to family.

"The idea of them being sent several states away ... these are very often poor families that can not make a trip, and they need to be able to talk about what’s going to happen to the family," said Peters during the meeting.

Jones said in his memo that detainees might be sent to Texas if Sacramento closed its facility, but ICE could not immediately confirm that. Hampton said via email that all ICE detainees would be out of Rio Cosumnes by the end of June. There were 82 male detainees in the facility on Wednesday.

“The Sacramento County Board of Supervisors’ decision to not renew a contract housing ICE detainees at the Rio Cosumnes Correctional Center will negatively impact local ICE operations," ICE spokesman Richard Rocha said in an emailed statement. "However, the impact will be greater for those who would have been detained at the facility. Now, instead of being housed close to family members or local attorneys, ICE may have to depend on its national system of detention bedspace to place those detainees in locations farther away from Sacramento, reducing the opportunities for in-person family visitation and attorney coordination."

The move to cancel the contract comes as the state cracks down on both public and private detention centers. Last year, the California legislature passed a measure, AB 103, that prevents public jails from entering into new contracts with ICE or expanding or modifying existing contracts.

That law also gives California's attorney general $1 million annually to inspect detention facilities. The attorney general's office conducted an inspection of immigrant detention at the Rio Cosumnes Correctional Facility earlier this year, but is not scheduled to release its findings until reporting to the legislature in March 2019.

The U.S. Department of Justice has sued California to block AB 103 and two other so-called "sanctuary" laws from taking effect.

A separate measure, SB 29, also called the Dignity Not Detention Act, went into effect this year. It curtails state and local governments from entering into new immigration jail contracts with private prison corporations.

Reyes Morales, the Norcal Resist activist, said his group planned to target Yolo County next, where the Board of Supervisors recently voted to a limited extension of its contract to house juvenile immigration detainees in a high-security setting, despite objections from its chief probation officer.

Rhonda Rios Kravitz of immigrant activist group Step Up said that her organization will focus on what happens to the detainees in Sacramento as they are moved. They plan to lobby federal legislators including U.S. Senator Kamala Harris and U.S. Congresswoman Doris Matsui to intervene and monitor the California detainees.

For all the activists, Tuesday's vote was proof their message and methods could work.

"There is no dignity in either exploiting or being exploited," said Carlos Montes-Ponce, who led the local effort on the contract for Sacramento ACT. "This is a big win for us."