labor 'We're Militant Again': US Teachers at Convention Galvanized by Wave of Strikes 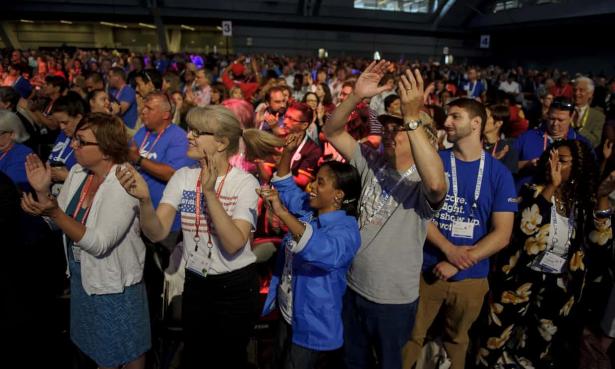 Audience reacts to former Secretary of State Hillary Clinton during her speech at the convention of the American Federation of Teachers on Friday, in Pittsburgh, Pennsylvania. , Jeff Swensen/Getty Images

Thousands of teachers gathered in Pittsburgh, Pennsylvania, this weekend for the American Federation of Teachers’ convention and to discuss a plan of action for the new school year after a series of extraordinary strikes across the US over pay and conditions.

The convention comes as the teachers’ union movement has been galvanized by a wave of strikes, mainly in traditionally Republican states. At the same time, public sector unions are facing a brand new assault on their finances after the supreme court ruled in June that public sector employees in unionized workplaces can opt out of paying union dues.

Addressing the meeting on Friday former Democratic presidential candidate Hillary Clinton said: “We have to gear up again, because the challenges we face now are truly unlike any we have seen for some time.”

However, teachers gathered in Pittsburgh say that instead of being deterred by the attacks on them that the attacks have forced their union’s member to re-engage more in order to keep members from leaving their unions.

“Whose schools? Our schools,” cried out Chicago Teachers Union vice president Jesse Sharkey as thousands of teachers poured out of the David L Lawrence convention center and into the blistering heat of Pittsburgh’s streets.

“We are all militant again, we will all go to jail if we have to,” said Robert Russo, a teacher union leader from New Jersey who served 15 days in jail in 1970 for his role in an illegal teachers strike. “They are taking away rights, they are taking away everything we have worked for years and people are very invigorated.”

Despite school being out for the summer, teachers around the country aren’t taking a break. They are mobilizing support for more teachers strikes in states across the country including in Louisiana, where a survey of 3,800 teachers in May performed by the union showed that 61% of teachers supported a strike.

“Some of our local presidents were calling and saying they saw what was happening in West Virginia and Oklahoma and that they had been hearing in their locals that there were teachers and school employees seeing these strikes and becoming inspired,” says Larry Carter President of Louisiana Federation of Teachers.

Teachers say that the key to these strikes being able to galvanize public support is connecting the cause of teachers to wider community issues.

“This is a public sector strike, we service children so if we don’t have the kids at school, we gotta have community folks out here that are gonna talk of kids,” said Tia Edison, a teacher from Louisville, who helped organized a strike there in the spring. “If you don’t have community support, it’s going to fail”.

The AFT used their rally to push not just better schools, but also gun control.

Speaking at the rally was Mei Ling, a rising senior from Marjory Stoneman Douglas high school, where 17 were killed in February including three members of the AFT.

“We need to stand up, we need to speak out because no else is going to do it for us,” said Ling, a survivor of the Parkland massacre speaking from the back of an improvised stage on a pickup truck. “We have a president who doesn’t care about anyone of us, just about the blood money inside of his pocket.”

As Ling was speaking, fireworks from nearby PNC Park were set off as a player hit a home run. Visibility triggered by the explosions, Ling started to tremble and stopped speaking. Randi Weingarten the president of the AFT, stepped up on the pickup truck and began to pat Ling’s back in an effort to comfort her.

“[These students] are speaking truth to us and sometimes even we feel anguished by their truth and the truth they need to speak,” said Weingarten.

Weingarten has been at the forefront of efforts to get the labor movement more engaged on gun control. The National Rifle Association even targeted her after she helped to lead a union effort to divest from gun companies.

As a labor leader, Weingarten, the first openly lesbian president of a major union, has been a trailblazing leader; pushing the labor movement to engage more on issues of race and gender and to get involved in community struggle in an effort to engrain unions more in the political fabric of communities. Her organizing efforts appeared to pay off as public opinion polling showed massive support for the wave of teachers’ strikes that hit the nation this spring.

While her union faces its toughest challenge in decades after the supreme court’s decision in the Janus case, she thinks the ruling has given her union a golden opportunity to organize.

“I am more than excited than ever,” said Weingarten. “They rue the day they decided to come after us because it’s motivated us even more.”

… we have a small favour to ask. More people are reading the Guardian than ever but advertising revenues across the media are falling fast. And unlike many news organisations, we haven’t put up a paywall – we want to keep our journalism as open as we can. So you can see why we need to ask for your help.

The Guardian is editorially independent. This is important because it enables us to challenge the powerful, and hold them to account – free from the influence of billionaire owners, politicians or shareholders.

The Guardian’s independent, investigative journalism takes a lot of time, money and hard work to produce. But we do it because we believe our perspective matters – because it might well be your perspective, too. For as little as $1, you can support the Guardian – and it only takes a minute. Thank you.