The contract at the Jesuit institution includes wage increases of 67% to 90% for a majority of adjunct faculty over the three-year contract. 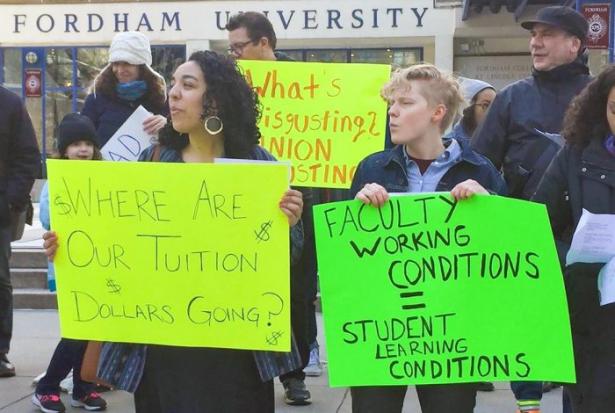 The contract at the Jesuit institution includes wage increases of 67% to 90% for a majority of adjunct faculty over the three-year contract.

It comes as the president of Santa Clara University, another Jesuit institution, steps down amidst calls to stop hiding behind the Trump labor board

The members of Fordham Faculty United/SEIU Local 200United, the union of more than 800 Fordham University adjunct and full-time, non-tenure-track faculty, voted overwhelmingly to ratify their first collective bargaining agreement with the Fordham administration. The vote came after a record-setting four months of bargaining and just seven months after non-tenure track faculty voted 16-to-1 to unionize.

Meanwhile, in Silicon Valley, tensions are mounting at another Jesuit institution. Last month the president of Santa Clara University resigned amidst calls to stop hiding behind the Trump labor board and allow faculty to vote on whether to form a union.

Fordham’s new three-year contract secures wage increases that rank among the highest ever won in a first contract by the more than 50,000 non-tenure track faculty affiliated with SEIU. For most adjunct faculty, pay will rise between 67% to 90%, with a majority of adjuncts receiving between $7,000 to $8,000 per course by the third year of the contract, depending on how long they have taught at Fordham. The contract sets a new minimum annual salary of $64,000 by the third year of the contract for full-time, non-tenure-track faculty with full course loads, an increase of roughly $14,000 for some of the lowest paid full-timers at Fordham.

Ashar Foley, a Fordham University Lecturer in Communication and Media Studies and member of the union negotiating committee, said, “I’m so happy to have helped bring this change in our working conditions. Not only does it benefit us and our students, but it also makes a strong case for unionization to faculty at other Jesuit institutions, and to all other institutions of higher learning in the New York City area. By unionizing, we play our part in the Jesuit University mission of alleviating poverty, promoting justice, and protecting human rights.”

Diane George, a Fordham University Adjunct in Sociology & Anthropology and a member of the union negotiating committee, added, “We’re thrilled to be getting significant pay increases and job security in our first contract. While there are still substantial issues to be addressed, particularly for adjunct faculty, the contract represents a major step towards transforming the exploitative system of contingent employment that is destroying higher education in this country.”

Today’s contract ratification stands in stark contrast to the response of other Jesuit institutions to calls for change from faculty and graduate workers. While the path to unionization at Fordham has been contentious at times, the university ultimately opted to work with faculty through the traditional National Labor Relations Board process. Last year, SEIU Local 200United struck a landmark neutrality agreement with Fordham University after an outpouring of support from students, tenure-track faculty, alumni, and various elected officials, including New York City Mayor Bill de Blasio, New York State Senator George Latimer ,and Senator Bernie Sanders of Vermont. Eligible faculty then voted 16 to 1 to join SEIU Local 200United.

Fordham joins other Jesuit institutions that have made efforts to live up to their social justice principles. In April, Georgetown University agreed to allow a union election through a third-party process, maintaining its independence from the National Labor Relations Board and state influence. Non-tenure track faculty at Saint Louis University and Loyola University Chicago have also formed unions.

Santa Clara University has objected to their employees’ call to organize outside of the National Labor Relations Board process.. While the National Labor Relations Board previously ruled that employees who do not act in a religious capacity still have the right to organize through the board process, many believe the Trump labor board could rule otherwise.

Calls for Santa Clara University to live up to Fordham and Georgetown’s examples have intensified over the last few months. So far, despite the fact that Fordham President Father Joseph McShane sits on Santa Clara University’s Board of Trustees, administrators have yet to agree to work with faculty.

Mary Long, a Math and Computer Science lecturer at Santa Clara University, said, “I can’t believe that if a leading Jesuit institution like Fordham can agree to work with its faculty on unionization, that Santa Clara University cannot.  So much for claiming to be committed to Jesuit values and social justice. It’s unacceptable that SCU’s Board of Trustees won’t follow the example set by one of its own members, the president of Fordham University.”

The contract ratification at Fordham marks the eighth contract reached by SEIU Local 200United since the launch of the Faculty Forward organizing effort in 2014 and is the first in the New York City area. Last month, adjunct faculty at Nazareth College in the greater Rochester Area voted 3-to-1 to join SEIU Local 200United. Nationally, more than 54,000 contingent faculty and graduate workers on more than 60 campuses have joined SEIU, including over 3,000 who have joined SEIU Local 200United since 2014. SEIU’S national higher education campaign, Faculty Forward, is working to raise standards in higher education by unionizing faculty across the country.

SEIU Local 200United represents over 15,000 workers across New York and Vermont, including approximately 7,000 higher education workers – from building services to dining services to part-time and full-time non-tenure-track faculty at over 25 colleges and universities. For more information, visit www.seiu200united.org.