Just hours after apparent confusion over the Miami Dolphins’ disciplinary-policy proposals sparked outcry, the league and the NFLPA announced on Thursday that no new rules related to the anthem “will be issued or enforced” 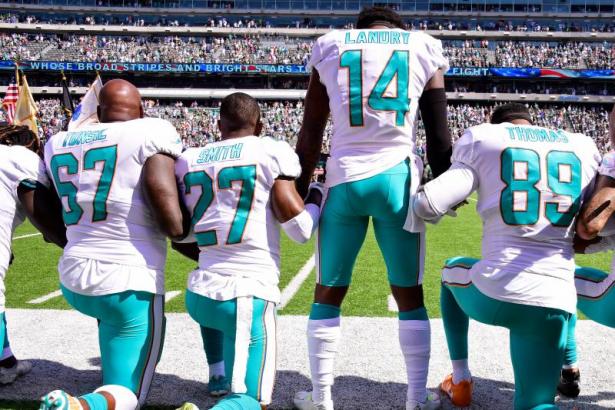 The NFL and NFL Players Association released a joint statement on Thursday announcing the league will temporarily freeze the enforcement of any new rules related to players protesting during the national anthem. Separately, The Washington Post reported that the as part of the freeze, the union will pause the grievance filed against the NFL earlier this month that alleged the new anthem policy infringed on player rights.

“No new rules relating to the anthem will be issued or enforced for the next several weeks while these confidential discussions are ongoing,” said the joint statement, which was released hours after the Associated Press reported that the Miami Dolphins had submitted a policy in their league-mandated discipline schedule giving them the ability to fine or suspend players who protest. 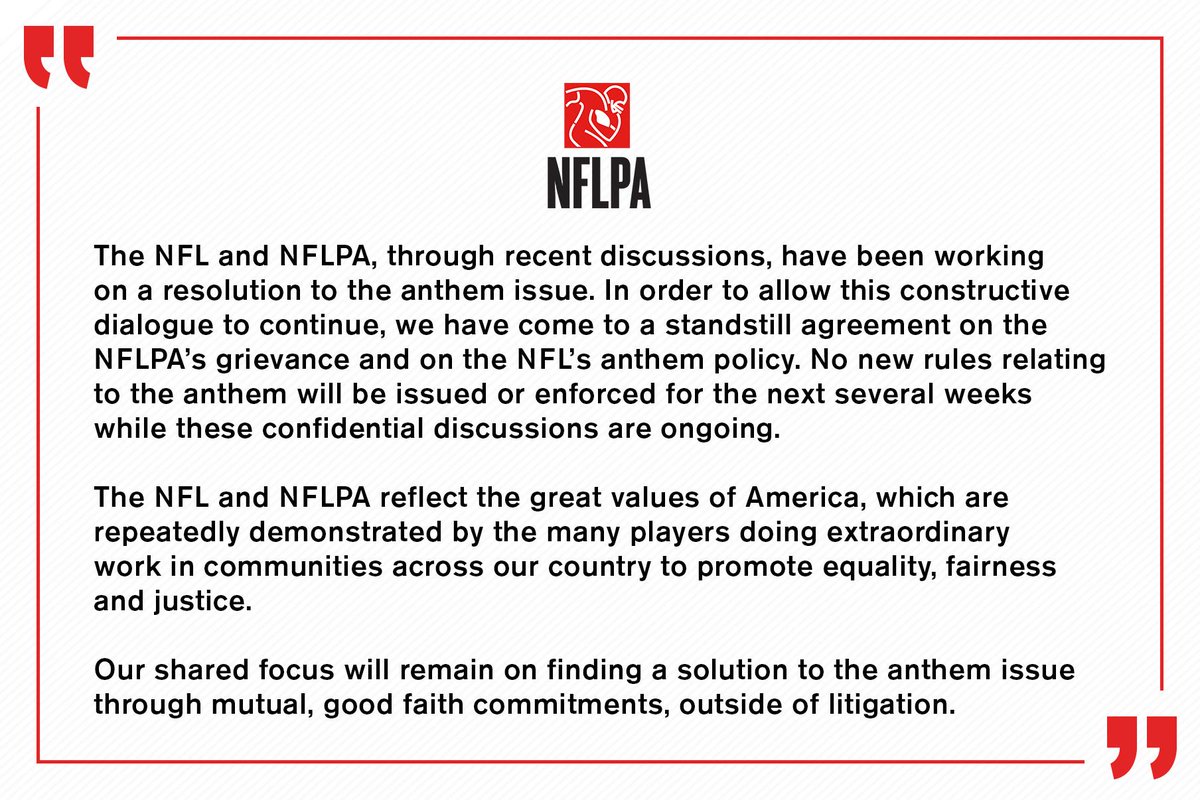 While the statement did not directly address the union’s grievance, a source close to the situation told the Post, “Everything is on hold.”

In May, NFL owners approved a rule dictating that team employees, including players, could choose to remain in the locker room during the anthem but must “stand and show respect” for it if they were on the field.

“If anyone is on the field and is disrespectful to the anthem or the flag, there will be a fine from the league against the team,” Roger Goodell said at the time. “The team will have its own work rule consistent with the overall policy and they will make their own decision about how to manage that from there at the club level.”

The NFLPA, which was not consulted before the rule change in May, announced on July 10 it had filed a grievance against the league to be heard by an independent arbitrator. Now both the new rule and the grievance are at a standstill. The “several weeks” referenced in the statement would seemingly extend into the Hall of Fame Game between the Bears and Ravens on August 2. Week 1 of the preseason kicks off on August 9.

The agreement was likely reached partially to contain the public relations fallout from the revelation of the Dolphins’ disciplinary-policy proposal on Thursday.

From a Dolphins source: The NFL required each team to submit its rules re the anthem before its players reported to training camp. The Dolphins fulfilled that requirement but will address this issue once the season starts. “All options are still open,” per source.

Miami put a policy in as a placeholder under conduct detrimental. CBA says such rules carry max penalty of 4 game suspension. News read as if Dolphins came up with the idea of suspending people. And all hell broke loose, which led to tonight’s conclusion bw the NFL and NFLPA.

How exactly was it taken the wrong way?

”I’m going to take a fine this year, why not?” Casey told CNN. “I’m going to protest during the flag. That’s what I’m going to say now. I’m gonna take my fine. … It’s not about the anthem. ... The way that the justice system treats minorities is the issue that we have. … For 95 percent of your team to be minorities, and you can’t understand where we come from, that’s pretty shocking to me.”

Titans president and CEO Steve Underwood said that he, general manager Jon Robinson, and head coach Mike Vrabel want to speak with Casey before the season to clarify that he wouldn’t be fined, according to The Tennessean.

According to NFL Media’s Jim Trotter, the confusion isn’t limited to players.

The level of confusion among teams regarding the new anthem policy - and whether clubs actually are required to write a team policy and include a formal schedule of fines/discipline - is astounding. I’ve spoken to several; different answers from each.

Colin Kaepernick, the first player to kneel during the national anthem, is still engaged in a collusion grievance filed against the league in October. A large part of the case revolves around “direct talks” President Donald Trump had with NFL owners. The NFLPA filed a grievance on behalf of Eric Reid, the first prominent protester to hit free agency since Kaepernick, in May after he failed to sign with a team.