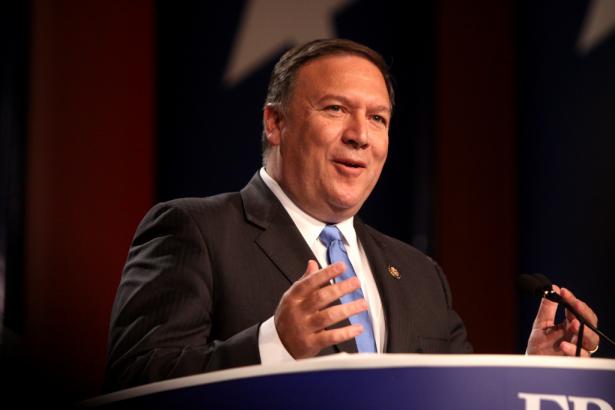 Secretary of State Michael Pompeo hosted a “Ministerial” where officials briefed global anti-abortion and anti-LGBT extremists on how to access US funding., Gage Skidmore

Prominent Christian conservatives and opponents of abortion and same-sex marriage – including several designated by the Southern Law Poverty Center as anti-LGBT “hate groups” – were among the participants at a high-level US government meeting on ‘religious freedom’ in Washington DC this week. The three-day event, hosted by Secretary of State Mike Pompeo, has the stated aim to identify “concrete ways to combat religious persecution and discrimination.”

“The ability to live according to the dictates of your own soul, is under attack,” said Sam Brownback, US Ambassador-at-large for international religious freedom and a conservative Catholic former governor of Kansas who is also known for his opposition to LGBT marriage equality. “We must commit to using all the might, the machinery, and the moral authority we have to stop those nations and actors who trample on free souls,” he declared.

Hundreds of people are attending the summit and side events, which began on Tuesday, including dozens of foreign ministers and delegates from religious groups of different faiths. They are being encouraged to work together – and learn how “to access US financial support for their efforts” from the state department and the US agency for international development (USAID). Speakers include Vice President Mike Pence, director of the government's budget office Mick Mulvaney, and head of USAID Mark Green.

The summit’s opening day featured testimonies from survivors of religious persecution including the brother of a murdered Pakistani Christian; a Rohingya lawyer, and the wife of a Christian pastor imprisoned in China. But it began with a breakfast side-event with ambassador Brownback, co-organized by the Christian conservative anti-LGBT ‘hate group’ Liberty Counsel.

Liberty Counsel says it “embraces a worldview that is historically Christian and biblical.” It opposes abortion and same-sex marriage and has often used freedom of religion, conscience, and speech arguments in its cases. Its lawyers represented a small town Kentucky clerk who was briefly jailed in 2015 after refusing to issue same-sex marriage licenses.

The group has also supported legal advocacy in Romania to define marriage in the constitution as exclusively between a man and a woman. This month, it celebrated a court’s refusal to grant an injunction against anti-abortion activists it represents, who “persuade women” outside a New York clinic “to change their minds about seeking an abortion by communicating the gospel.”

Alliance Defending Freedom (ADF) is also at the summit. Since 1994, it’s “grown from the prayers of… godly leaders to become a major force in the legal battle for religious freedom.” It’s also a ‘hate group’ according to the Southern Poverty Law Center which includes it in its 'extremist files.' "Since the election of President Donald Trump," it says, "ADF has become one of the most influential groups informing the administration’s attack on LGBT rights."

Recently, ADF lawyers supported the case of a Christian baker in Colorado who refused to make a same-sex wedding cake, saying it would go against his beliefs. (The Supreme Court ruled in his favor earlier this year).

This week, ADF’s international wing is co-organising a side event with the James Dobson Family Institute – which guides families “on how to apply biblical principles to their lives” – on a current cause celebre for religious conservatives: 'parent’s rights.’ “Religious liberty cannot be left at the threshold when one enters the home,” said ADF’s president Michael Farris.

The summit “will send a very strong message that America is once again concerned about religious freedom,” said Tony Perkins, president of the ‘hate group’ Family Research Council which says its “mission is to advance faith, family, and freedom in public policy and the culture from a Christian worldview.”

Perkins, who once claimed that “true religious freedom” applies to “orthodox religious viewpoints,” was also appointed earlier this year to the federal government’s US Commission on International Religious Freedom.

On Tuesday, Ambassador Brownback said the summit’s attendees came from 80 countries and different faiths. “Religious freedom really, truly is for everyone. It’s a right given by God,” he said. Multi-faith coalitions for religious freedom were encouraged by some speakers. But “few religious groups are as excited about the gathering as evangelical Christians,” Politico noted.

Groups like Liberty Counsel, ADF, and FRC have been campaigning on religious freedom platforms for years. Other attendees at the summit included a leader of the National Association of Evangelicals and Paula White-Cain, a Florida megachurch pastor who led a prayer at Trump’s inauguration, and TV producer Mark Burnett, creator of Survivor and a series called The Bible.

In an open letter to Pompeo, Faith McDonnell from the Institute on Religion and Democracy (IRD) said it was “refreshing” to see “this level of concern for and determination to defend those who suffer for their faith.” Though she also called for greater focus on Christians around the world, who she claimed are “being persecuted for their faith [more] than any other religious believers.”

On Twitter, some questioned whose voices and perspectives were being left out. Naomi Washington-Leapheart at the National LGBTQ Task Force tweeted:“Can we get some testimony from folks in the US who have experienced trauma visited upon them by the exercise of religion? Can I get a queer witness? Hear from survivors of discrimination cloaked as piety on *this* soil?”

Peter Henne, a University of Vermont political science professor, warned civil society delegates “excitedly participating” in the summit to “be careful they don't buy into a definition of religious freedom that excludes Muslims.” The Trump administration has actually “acted contrary to religious freedom,” he said, including with its travel bans affecting people in Muslim-majority countries.

The conference comes as sexual and reproductive rights advocates warn that religious freedom arguments are increasingly being used to challenge anti-discrimination policies and access to services. “We’re concerned,” said Catholics for Choice, that it “is being redefined to mean religious privilege.”

The NGO noted efforts “to expand religious refusals” to provide reproductive health care. Maya Rupert at the Center for Reproductive Rights has also said that Trump’s administration has used such arguments to “deny essential reproductive health services and embolden those who want to discriminate,”

This year, a new Conscience and Religious Freedom Division opened within the US Department of Health to enable workers to opt out of procedures (such as abortion or contraception) on religious or moral grounds.

The Trump administration has also “taken a stand on behalf of religious liberty in the courts,” said the White House in a statement, by supporting the Christian baker in the recent ADF-backed supreme court case.

This week’s gathering has included presentations from state department officials on how groups working on religious freedom can access its funding. On the schedule of side events there is also a “US government grant workshop” with “speakers from the US State Department and USAID [who] will provide training on how to apply for US government funding.”

The summit at the state department “will set the stage for new frontiers and expansion of religious liberty for the family for decades and generations to come,” said Tim Clinton, at the James Dobson Family Institute.

Pompeo has also promised follow-up. Internationally, US teams will be “in the field talking about religious freedom on a continued basis,” he said. “This will be a mission of the State Department everyday.” Women’s and LGBT rights defenders, in the US and beyond, will be on high alert.

[Claire Provost is editor of openDemocracy 50.50 covering gender, sexuality and social justice. Previously she worked at The Guardian and was a fellow at the Centre for Investigative Journalism at the University of London.]