Interference in US Elections Has Been Going on for Years. Reason? Voter Purges

As ever more voters are delisted, no part of the US is immune from purges – but every eligible American deserves the right to vote. 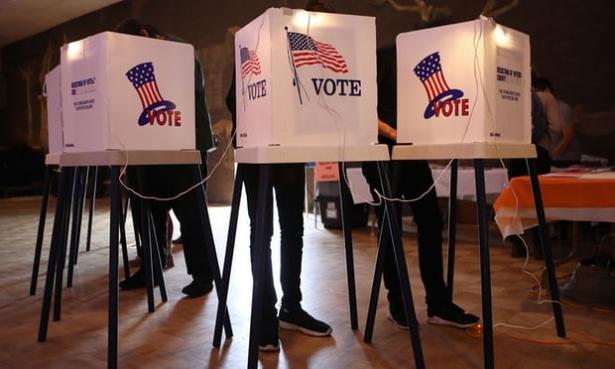 ‘No one should allow these challenges to prevent them from casting a ballot.’ , Mario Tama/Getty

In every American election there are some voters who show up to their polling place ready to cast a ballot, only to find their name isn’t on the registration list. The reason? Voter purges, an often flawed effort to update voter rolls by removing voters’ names from registration lists. Virginians fell victim in 2013, when nearly 39,000 voters were removed when the state relied on faulty data to determine which names should be deleted. In 2016 it was New Yorkers, when the New York City board of elections wrongly deleted more than 200,000 names.

No area of America is immune, as purges have grown against the backdrop of a controversial supreme court decision in 2013 that gutted federal protections for voters. In fact, a new Brennan Center report found that purges could threaten the right to vote for millions in November.

Purges have increased particularly in a handful of largely southern states which were freed from oversight by the supreme court’s landmark 2013 decision in Shelby County v Holder. Before Shelby County, areas around the country with histories of racial discrimination in voting were prohibited from making election changes without first showing that the change would not make minority voters worse off, or that the change was not enacted with that purpose.

Had purge rates continued in these areas at the same pace as rates in jurisdictions not subject to preclearance at that time, 2 million fewer voters would have been deleted from voter rolls between the elections of 2012 and 2016. Overall, between the federal elections of 2014 and 2016, almost 16 million people were removed from the rolls. That’s almost 4 million more names than were purged between 2006 and 2008.

We cannot tell how many of those individuals were wrongly kicked off the voter rolls. And there are legitimate reasons that names get deleted in order to help keep voter rolls up-to-date. Individuals can be removed when they pass away or move, for example.

But we do know from our research that some states and jurisdictions are using bad information to determine who should be removed from the rolls, like relying on a faulty list that flags eligible voters as ineligible. Some are depending on matching criteria used by a problematic purge database called Crosscheck, which has been found to be more likely to flag African American, Asian American and Latino voters for removal than Caucasian voters. Or officials are processing the data they have in problematic ways, like assuming two individuals with similar identifying information as the same person. Additionally, we identified some states that disregard a waiting period and notice to voters, which is required by federal law before a voter can be purged.

It’s clear that purges are a growing threat. But they’re far from the only thing that will impact voters this fall. Public battles continue over early voting cutbacks, strict laws that demand voters present certain kinds of photo identification before voting, and laws requiring voters to present documentary proof of citizenship before registering to vote. These types of policies have also been shown to dampen the voices of minority voters in particular, and since the 2010 election their prevalence has grown. This November, 23 states will have new barriers in place along these lines.

Advocates have had some successes blunting these laws and blocking others, especially through the courts, but there is still work to be done. And recent decisions by the supreme court emphasize that the judicial branch cannot be counted on as the only backstop against restrictive voting laws.

In addition to its extraordinarily consequential decision five years ago in Shelby County, the supreme court declined to place limits on Ohio’s controversial purge practices this year in its ruling in Husted v A Philip Randolph Institute. Plaintiffs in the case were challenging an Ohio policy that began the process of removing individuals from the rolls if the voter missed just one federal election. Other states have a more generous waiting period before deleting names.

The internal threat of purges and other voting restrictions comes as foreign powers are also making moves to influence our democratic process. By now it’s well known that cybercriminals linked to the Kremlin attempted to access election systems in 21 states. And Russia also took the fight to social media, buying political ads on Twitter, Facebook and Google to sow discord in the electorate.

Amid this onslaught of challenges, there are three key things we can do to make sure everyone’s voice is heard on election day.

Every eligible American needs to register to vote, and every registered voter needs to be proactive about making sure their information is up-to-date. Often states have a way to look this up online. Voters should preferably check records a little over a month before the election, at the latest. Local voter registrars are also available by phone to check on registration status and correct any issues.

We also need to make sure local officials have the resources needed to run smooth elections. That includes secure voter databases, and voting machines with paper backups of votes that can be audited to confirm electronic vote totals. Poll workers also need to be well-trained, and have the knowledge and support to calmly diffuse any attempts to intimidate voters at polling places on election day.intimidate voters at polling places on election day.

And most importantly, every eligible voter needs to vote. No one should allow these challenges to prevent them from casting a ballot. Voting is empowering and provides us all with some say over what happens to us, our families and our community. Advocates are ready to help with any problems on election day – just call 1-866-OUR-VOTE.

For a robust, representative and accountable democracy we need a participatory electorate. This is not a time for voters to be deflated, it is a time to get to work.

Myrna Pérez is Deputy Director of the Brennan Center’s Democracy Program and leader of the Center’s Voting Rights and Elections project.

The Guardian is editorially independent, meaning we set our own agenda. Our journalism is free from commercial bias and not influenced by billionaire owners, politicians or shareholders. No one edits our Editor. No one steers our opinion. This is important because it enables us to give a voice to the voiceless, challenge the powerful and hold them to account. It’s what makes us different to so many others in the media, at a time when factual, honest reporting is critical.