What’s the best way to push profit-seeking corporations out of the public sphere? Don’t let them take over in the first place. 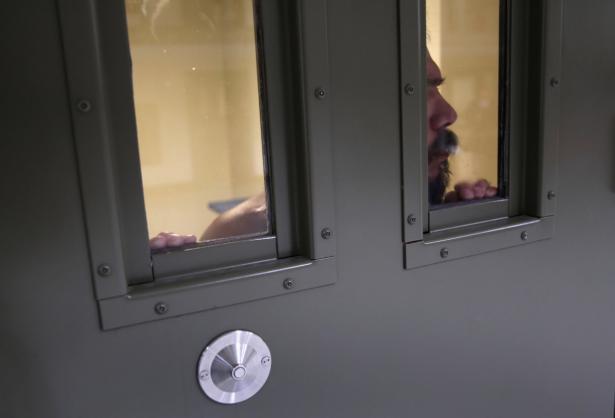 An immigrant detainee looks from his segregation cell at the GEO Group Adelanto detention jail on November 15, 2013, in Adelanto, California., John Moore/Getty Images

Residents of Lancaster County, Penn. were thrilled to learn this lesson with their recent victory against Geo Group, a giant of the private prison industry.

Geo Group has gained notoriety for its shady practices, with a rap sheet as varied as the so-called services it provides. Geo has turned into a household name in recent weeks for profiting off the youth and family detention centers that have become hallmarks of President Donald Trump’s inhumane immigration policies. But the company’s heinous practices predate Trump — though their highly suspect lobbying relationship with the current administration is well-documented.

The private prison profiteers have misspent millions in federal funds, only to manage facilities that one federal judge called “a cesspool of unconstitutional and inhuman acts and conditions.” Despite their abhorrent track record, Geo has raked in hundreds of millions of dollars in federal government contracts in the last year, with a staggering $9.7 million lining the pockets of CEO George Zoley in 2017.

In Lancaster County, Geo found a smaller target than the family detention centers currently at the top of the headlines. The company was bidding to take over the reentry services the county provided to formerly incarcerated people as they left the prison system. Unfortunately for Geo, Lancaster County already had an established reentry program. A coalition of nonprofits known as the Reentry Management Organization had been providing community-led reintegration services with documented success.

But those nonprofits, which were funded on an ad-hoc basis, were left in the dust when the county decided to change the funding process to a bidding-style competition. A whirlwind of changing standards and priorities, along with opaque proposal processes, left the nonprofits confused, as the services they’d long provided were no longer aligned with the  county’s goals. Meanwhile, Geo Group capitalized, putting forward the only bid to provide parolee services.

The company had been circling Lancaster for some time, Michelle Hines, an organizer with Lancaster Stands Up, said. Lancaster residents were surprised and angry to learn that local nonprofits might be replaced by prison profiteers, and leapt into action, planning town halls and packing prison board meetings to protect a valuable community institution.

“I don’t think they were expecting to have to make this decision in the light of day,” Hines said. “Municipal government stuff, people don’t usually pay attention. There’s usually like two people at the county commissioner’s meetings. I don’t think they expected such a community response — or, as they called it, a distraction.”

People filled the commissioner’s meetings — religious leaders, nonprofit leaders, formerly incarcerated citizens — as the normally empty gatherings turned into standing room only events. Hines says the furor was a testament to how negatively the community felt about Geo Group, but also how well local nonprofits were functioning in that space for years. “They had a level of service that could only come from people in the community that really, really care.”

“I didn’t know these local organizations before and how successful they were, but I did know Geo Group and that it’s a bad company,” Hines said, citing her concerns over for-profit prisons in general, and Geo’s contract to build controversial immigrant family detention centers in particular. “I know I’ve lived in Lancaster my whole life and I don’t want them in my county.”

Neither did many people in Lancaster. The mass attention to the proposed contract took county commissioners by surprise. Ultimately, the county was swayed by the display of distrust in Geo. While the next steps remain unclear, the county rejected the company’s bid to manage the reentry program at a packed town meeting earlier this month. While Hines and other members of the community are still pushing the county to let the local nonprofits maintain control over the reentry program, they’re celebrating Geo’s denial.

“These big corporations over and over again come into our communities, buy people off, and then are able to perpetrate harm against everybody here,” Hines said. “For a really long time I’d been watching this happen and it just felt like an impossible thing to fight back against, and I feel so empowered to be in a position to have enough people power in our community to be able to fight back.”

For Hines, the win against Geo is a success in its own right, but it’s even more powerful because it’s one of the first concrete successes that she can point to as an organizer with Lancaster Stands Up — something she hopes will encourage budding activists in a region that’s frequently written off by the media and national progressive groups. “I am of the philosophy that one of the best things you can do when organizing a group of people is give them a taste of their power.”

Lancaster Stands Up has been organizing to build power in southern Pennsylvania for two years now. The collective came together in the wake of Donald Trump’s election in November 2016, and has since put pressure on elected officials across the political spectrum in an effort to recast established politics into something that works for people in their community.

“That election was degrading to people. A lot of people felt powerless to have any kind of say in their community, and felt like things were going in a direction so quickly that was opposite to our values,” Hines said. “To do work to try to make sure that the people, the regular, everyday working people have a voice, and to see that actually come to fruition in such a concrete way, to see evidence and validation that what we’ve been doing is working, is really incredible.”

Hines also hopes that the victory against the Geo contract will help other communities railing against what often feel like insurmountable odds. “I hope we can provide some inspiration to other groups that are fighting and feel like they’re up against an impossible system and incredible power, to know to keep at it. We’re not going to have for-profit prisons forever,” Hines said. “We’re going to win this fight but we’re not going to win it if we don’t keep fighting it.”

As for Geo? Hines says that their fight against the private prison profiteers began before they were a mainstay in national news headlines, but she wants to keep the target on their back. “Now I hope that they get worse press, and that they get driven out of communities across the country. That would be the dream.”

Negin Owliaei is a researcher at the Institute for Policy Studies and a co-editor of Inequality.org.

Inequality.org has been tracking inequality-related news and views for nearly two decades. A project of the Institute for Policy Studies since 2011, our site aims to provide information and insights for readers ranging from educators and journalists to activists and policy makers.