'It's Definitely Intimidation': Police Accused over Raids on Activist's Family

Was it coincidence that a mass raid on two Memphis homes occurred on the first day of a trial in which police face claims of illegal surveillance of Black Lives Matter campaigners? 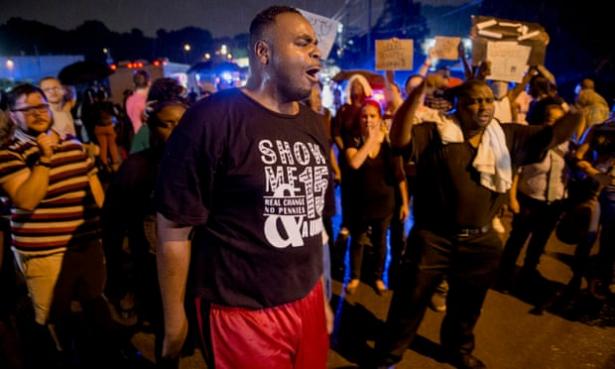 Memphis Activist Antonio Cathey demonstrating at the annual vigil for Elvis Presley at Graceland., Brandon Dill for the Guardian

The peace and quiet of a south Memphis neighborhood gave way to chaos on Monday, as more than two dozen police cars, most unmarked, blocked off the street before officers raided two homes.

Witnesses described more than 50 heavily armed officers: local police, sheriff’s deputies, some from other agencies. Many shielded their identity with black ski masks.

The score from this elaborate, multi-agency gang taskforce effort? A single “roach” from an ashtray, containing a quantity of marijuana too small to trigger an arrest. The homeowner was given a written citation.

Minutes away, at a downtown courthouse, the police department was entering its first day on trial. The case, brought by activists and the American Civil Liberties Union (ACLU), alleges the Memphis police department (MPD) engaged in illegal surveillance of activists involved with Black Lives Matterand Fight for 15, including “catfishing” them with fake social media accounts.

In a statement to the Guardian, the MPD said the timing of the raid was “not related to the ACLU lawsuit in any way”.

Activists feel differently – the homes raided belonged to the uncle and grandmother of Antonio Cathey, one of the city’s more well-known activists and one of the targets of the alleged police spying.

Following the raids, activists reported police searching a community garden, tailing activists in unmarked cars, and in one case pulling over a vehicle in which one passenger was an ACLU lawyer representing the activists. The lawyer was briefly detained, in handcuffs.

“It’s most definitely intimidation and it’s to show us that even the courts can’t stop them doing what they want to do,” said Keedran Franklin, a prolific activist who has described being watched and targeted by Memphis police over the last two years.

According to Cathey, in the raid on his uncle’s home police tossed drawers, left clothing strewn about the house and broke family pictures. When officers entered the second house, he said, they pointed weapons at his 71-year-old grandmother.

“It was a retaliation to what was going on in court and it was an intimidation tactic but it didn’t scare me,” he said.

Cathey, Franklin and the ACLU lawyer Scott Kramer were at the courthouse for the first day of the trial when Cathey got word of the raid. When Kramer arrived at the scene, he said, he saw a number of officers using masks and bandannas.

“One guy used what looked like a white sheet on his head and then sunglasses over top of it,” Kramer said. 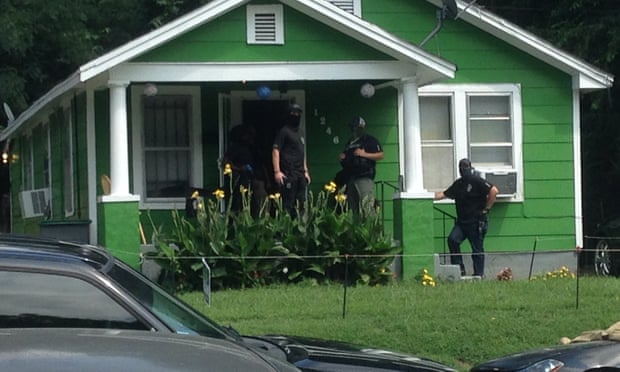 Members of the western Tennessee multi-agency gang unit (MCU) in ski masks as they execute a search on the home of Antonio Cathey’s uncle, James Cathey. Photograph: Courtesy of Scott Kramer

He also noted that several of the vehicles used appeared to display civilian license plates.

In its statement to the Guardian, the MPD did not address questions about masks or vehicles. It said the gang unit was dispatched on a warrant on suspicion of cocaine trafficking, then moved to Cathey’s grandmother’s house and arrested his cousin on an unrelated outstanding assault charge.

When authorities left the scene, Kramer was in a car with several activists who decided to follow one of the unmarked cars. They did so briefly before the county sheriff sent four vehicles to pull them over, for “following too closely”.

In a video posted to Facebook Live by the driver, Spencer Kaaz, another local activist, Kramer can be heard asking “why are you putting me in handcuffs” as an officer pats him down. The other passengers decline to get out. After some time, officers uncuff Kramer. He returned to court for the rest of the day’s proceedings.

Kramer said: “The bullet point is: on the same day that the ACLU is bringing a suit against the Memphis police, [they are saying] ‘We can pull you over and put you in handcuffs whenever we want to.’”

Cathey reported being followed by one of the undercover cars later in the week. On Thursday, Franklin discovered that MPD officers had paid a late-night visit to a community garden maintained by activists in Memphis’s Concerned Citizen Coalition, the group police are principally accused of spying on.

MPD would only tell the Guardian there was no call for service made at the garden. It declined to provide a reason why officers might have been there. 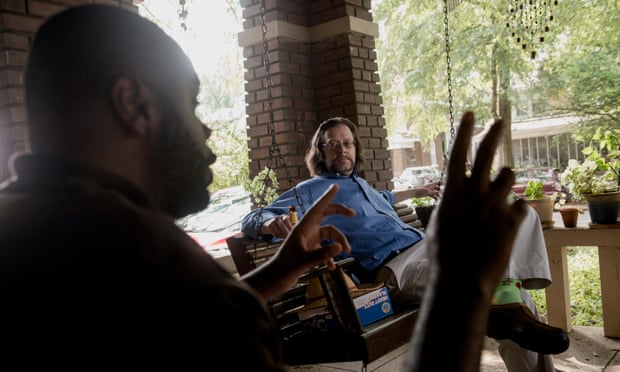 The surveillance project was operated by the MPD’s office of homeland security, which officials said was “originally designed to deal with threats to the MPD or Memphis in general”.

In a deposition for the ACLU lawsuit, officials said the office had been “retooled” around 2016, due to an increase in policing-related protests and to focus on “local individuals or groups that were staging protests”.

This included the publication of daily joint information briefings on potential protests and known protesters. According to the suit, the briefings regularly included information about meetings on private property, panel discussions, town halls and even innocuous events like “Black Owned Food Truck Sunday”.

A good deal of that information appears to have been obtained by a fake MPD Facebook profile for “Bob Smith”, which the ACLU said was used “to view private posts, join private groups, and otherwise pose as a member of the activist community”.

In one case, the Bob Smith pseudonym chatted with a protester on Facebook, describing himself as “just a fellow protester” and later saying “block me if you want, but i’m not a cop”.

A federal judge is currently considering his verdict on the ACLU lawsuit. He has already ruled that the city violated a federal consent decree barring the city from engaging in political surveillance. The judge will issue rulings later on several issues, including if the ACLU has standing in the case, if the consent agreement should be modified and if police violated the activists' first amendment rights by gathering political intelligence.

Late on Friday night, Franklin and Cathey were riding in a car when they were pulled over once again, allegedly for a busted turn signal light. Franklin streamed the incident to Facebook Live.

“I guess this is shit we’re going to go through, until they get it together,” he said.

Cathey told the Guardian: “The cops intimidate and follow us and do those things because they think they can just get away with it.

“But I’m going to be that voice for the people and let them know that this is not right. You guys are not going to continue to do this shit and get away with it, point blank. Period.”

Sign up for Guardian Today US edition: the day's must-reads sent directly to you.