A Deal May Be Possible, But “All Take, No Give” Won’t Work with North Korea 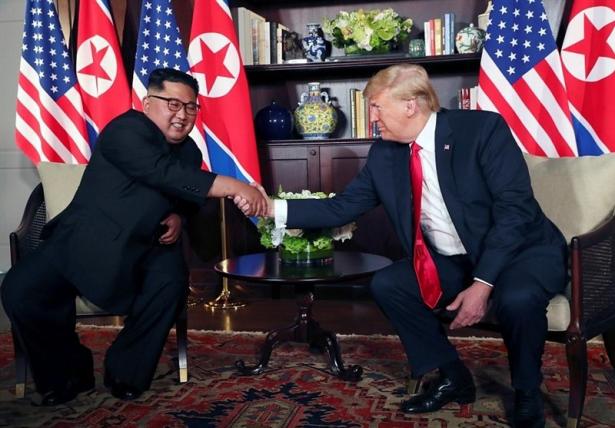 US President Donald Trump and North Korean Supreme Leader Kim Jong-un. Above all else Kim seeks an end to US enmity., Tasnim News Agency

The United States cannot get some of what it wants without giving North Korea some of what it wants. Yet that is precisely what Washington has been trying to do—and predictably getting nowhere, as President Trump acknowledged by postponing Secretary of State Mike Pompeo’s latest mission to Pyongyang. Defense Secretary Jim Mattis tried to increase pressure on the North by announcing, “We have no plans at this time to suspend any more exercises.” While he clarified that no decision had yet been made, he also noted, “We are going to see how the negotiations go, and then we will calculate the future, how we go forward.”

Washington is insisting that Pyongyang fulfill its commitment at the Singapore Summit to “work toward complete denuclearization of the Korean Peninsula,” without addressing its own commitments at that summit “to establish new U.S.-DPRK relations,” and “to build a lasting and stable peace regime on the Korean peninsula.” Policymakers opposed to negotiations have disclosed intelligence that North Korea is continuing to produce fissile material and missiles, as if it is obliged to stop without any deal.

While the Trump administration demanded that the North move first, reportedly by providing a complete inventory of its nuclear material and production facilities, the North countered with the demand that Washington join South Korea in declaring an end to the Korean War. The declaration would commit to initiating a peace process that would include military confidence building measures to reduce the risk of deadly clashes in the contested waters of the West (Yellow) Sea and the Demilitarized Zone and culminate in a formal peace treaty.

The administration contends that the North wants the peace declaration before taking steps to denuclearize, but as North Korean Foreign Minister Ri Yong Ho told ASEAN foreign ministers in early August, “We believe that a method involving the balanced, simultaneous, step-by-step implementation of all terms in the Joint Statement, preceded by the establishment of trust, is the only realistic means of achieving success.” He emphasized the North’s “unswerving resolution and commitment to responsible, good-faith implementation of the Joint Statement,” and the “unacceptability of a situation in which we alone are the first to move unilaterally.”

His statement is just the latest indication that a deal is possible if the United States is prepared to accept a peace declaration. Seeking a nuclear inventory in return will only initiate a long period of uncertainty, however, with little benefit to the US and allied security while Washington tries to verify that inventory and while North Korean manufacture of fissile material and missiles runs free. A better starting point for Washington to seek is a suspension of the production of plutonium, highly enriched uranium, and intercontinental- and intermediate-range missiles, along with a declaration of the locations of related production sites.

Denuclearization of the Korean Peninsula depends less on maintaining maximum pressure than on addressing what Kim Jong Un wants in negotiations. Contrary to the conventional wisdom about the end of the US alliance with South Korea, the abandonment of the nuclear umbrella, the withdrawal of US forces, a Marshall Plan, or even written security assurances, what Kim wants is an end to US enmity—what the North Koreans call the US “hostile policy”—and reconciliation. Based on what North Korean diplomats have been telling US officials and ex-officials for years, this entails the normalization of political and economic relations, a “peace regime” on the Korean Peninsula, and ultimately, an alliance like the one the United States has with the ROK, one that would be backed by a continuing US troop presence on the peninsula.

Most experts assume that the North has no intention of giving up its nuclear weapons. That is mere speculation. There is no way to know for sure whether or not Kim is willing to keep his pledge to disarm and what he will want in return. Diplomatic give-and-take with concrete proposals for reciprocal steps is the only way to find out. Dismantling production facilities and verifying disarmament will take years. So will convincing steps toward reconciliation. Only then will Kim reveal his willingness to give up his weapons.

[Leon V. Sigal is the director of the Northeast Asia Cooperative Security Project at the Social Science Research Council and the author of Reporters and Officials: The Organization and Politics of Newsmaking and Disarming Strangers: Nuclear Diplomacy with North Korea.]