Here’s the Ugly Truth About the Ugly Produce Movement

VC-backed startups are commodifying need and undermining food banks and CSAs while they're at it. It's a market solution disguised as activism. 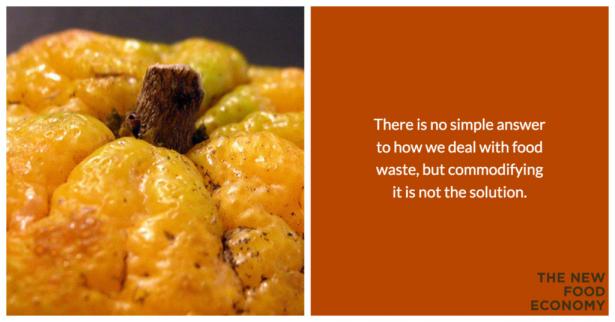 There is no simple answer to how we deal with food waste, but commodifying it is not the solution,Flickr / Lara604 .

Back in 2015, we at Phat Beets Produce received a curious email from a “startup” produce company serving the East Bay in California, who wanted to partner with us to “support the work you do.” As a nonprofit dedicated to food justice, we work with small farmers of color and young entrepreneurs through a variety of youth programs and our small-scale “BeetBox” CSA–a community service agriculture enterprise that links local farmers to consumers in low-income neighborhoods. We were intrigued.

The company turned out to be Imperfect Produce, a business that buys up “ugly” produce from large agribusiness for resale at a discount through a subscription box program. Three years later and with a 30-percent drop in customers at our Beet Box CSA, we realized that we were being out-competed by a startup with a glitzy marketing campaign and venture-capital funding. This corporate-supported agriculture was avidly commodifying agribusiness’ food “waste” and had little to do with supporting the community.

Our BeetBox CSA supports small farmers of color mostly farming under 50 acres, including a one-acre youth farm at an Oakland High School. Before Imperfect Produce arrived, the BeetBox profits allowed us to supply produce to under-resourced neighborhoods, support free community meals programs and supply free fruit to a variety of youth programs. We provided food for the Self-Help Free Produce Stand, and a Rx Prescription Veggie Voucher Program at Children’s Hospital in Oakland, as well as free home delivery for EBT/SNAP/food stamp customers.

Within months of its arrival in the Bay Area, Imperfect Produce fliers were showing up on our car windows, its outreach coordinators were pitching at community meetings, its Facebook advertisements popped up daily in our feeds, and it was edging into community centers we had operated at for years. The marketing blitz paid off. Soon, Imperfect’s single-use cardboard boxes began lining the streets on recycling and garbage days in the East Bay. We lost customers, a lot of customers.

BeetBox subscriptions have fallen so much we’ve had to cut back on many of the food justice programs that our CSA proceeds had previously supported. Our moral economy was being gobbled up by a hungry start-up parading as a social enterprise.

The commodification of need

Imperfect Produce claims it’s saving the world by reducing food waste—and helping farmers by buying surplus “ugly” produce that would have been thrown out. Sounds great. The reality is that this produce would have otherwise gone to food banks, to be redistributed for free. As social safety nets continue to get slashed and incomes stagnate, more and more people are turning to these food banks to access this imperfect produce. Imperfect Produce (the startup) is cutting into this same surplus, rebranding it, boxing it up in single use cardboard boxes and making a profit off of the desires of “conscious” consumers who want to reduce food waste.

On the Frequently Asked Questions section of its website, Imperfect Produce claims that the California Food Banks only take 150,000 pounds per year of produce from California’s farmers as a donation, implying that the rest is going to waste. But the California Association of Food Banks says it receives and redistributes 164 million pounds of fruits and veggies each year! Something smells about this strategy, and it’s not the compost.

Further gentrification of the food system

Imperfect Produce reflects a very troubling trend that is undermining local, small-scale farmers and food justice initiatives, a trend that commodifies and gentrifies food waste. The company has helped to create a market for the “waste” created by industrial agribusiness, selling it to conscious (rather than needy) buyers by branding it as a form of environmental activism. This produce used to be readily available to food banks but now that “ugly” and “imperfect” produce can turn a profit, they are less available to those in need. Those with limited access to fresh produce are at risk of no longer accessing free, fresh produce through the food bank and their affiliate distribution channels. Small, local, and urban farmers are losing their CSAs—their lifeline to economic viability.

Imperfect Produce isn’t rooted in a community economy, but the free market, investors, and higher-income consumers.

Ben Simon, co-founder of Imperfect Produce, spoke about scale to  U.S. News & World Report: “[The] farmers we work with have to have enough volume for it to really make sense. We want to be able to source at least a truckload from these growers each week, so they have to be at least midsize in most cases.” Imperfect Produce is only able to make a profit by working with the larger global agribusinesses, not the picturesque small and mid-sized farms it projects in its marketing campaign. The company donates the ‘leftovers of their leftovers’ to nonprofits and the very place that surplus produce would’ve gone to in the first place, food banks. The only thing Imperfect has done is fulfill its bottom line by creating another market for agribusiness’ systemic overproduction. It’s a clever money making scheme, but it certainly doesn’t help small, local farmers or address the source of waste: overproduction by industrial farms as they produce the “perfect” produce sold in supermarkets.

A case of sour grapes?

Some may claim we have a case of sour grapes. This is capitalism at its best, they might say. While Imperfect Produce has always been a friendly bunch willing to donate its surplus, it sells a market solution disguised as activism, undermining alternative economies and social justice initiatives like those implemented by Phat Beets. The company does this by commodifying food that would go to the poor for free, while branding itself as an ethical solution to food waste. Unlike CSAs, it isn’t rooted in a community economy, but in the free market, investors, and higher income consumers. Small farmers and poor communities lose out in the process.

There is no simple answer to how we deal with food waste, but commodifying it is not the solution. The U.S. food justice movement was built on the shoulders of the Black Panthers’s Free Breakfast/Meals program and the work of the United Farm Workers that is over 50 years old, and comes straight out of North Oakland and the Central Valley of California. Following in their footsteps, our partners at organizations such as Self Help Hunger Program, Food Not Bombs, Mother Wright, Qilombo, The Village, Poor News and many others are rooted in these tried and true means of healthy food distribution for the people by the people.

This op-ed was contributed by Phat Beets Produce, an American food justice collective based in North Oakland, CA, and Food First, a “people’s think tank” dedicated to ending the injustices that cause hunger and helping communities to take back control of their food systems—also based in Oakland.