In 2017 MSNBC ran 1,385 broadcasts on Russia and its political meddling. I wonder what the average Honduran today thinks about U.S. corporate media’s obsessive coverage of alleged Russian interference in the 2016 presidential election. 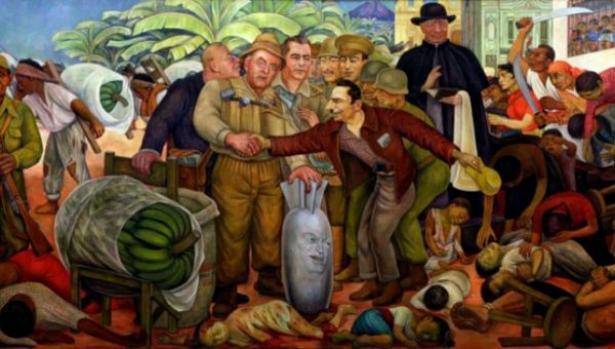 OXFORD, Miss. - Back in 1910, New Orleans fruit company boss Samuel Zemurray got sick and tired of Honduran tax levies on his business interests there and sent a gang of mercenaries to overthrow the Honduran government. They did, and his United Fruit Company, today known as Chiquita, became a giant in the region.

Eighteen years later, the U.S. Navy helped the United  Fruit Company overcome a crippling workers’ strike by supporting Colombian Army leaders in an attack on the strikers that killed as many as 2,000. Famed writer Gabriel Garcia Marquez wrote about this in his novel One Hundred Years of Solitude.

In 2009, almost exactly a century after the Zemurray-engineered coup d’etat, then-U.S. Secretary of State Hillary Clinton gave her support to the overthrow of Manuel Zelaya, the democratically elected president of Honduras.  Not liking Zelaya’s left-leaning politics, Clinton preferred the military-backed regime that replaced him and has since made Honduras one of the world’s most dangerous, crime-ridden countries.

I wonder what the average Honduran today thinks about U.S. corporate media’s obsessive coverage of alleged Russian interference in the 2016 presidential election.

In 2017, MSNBC, the “liberal” counterpart to right-wing Fox News, ran 1,385 broadcasts on Russia and its political meddling. By comparison, Yemen and its deadly bombing by Saudi Arabia with U.S. military assistance got 82 MSNBC broadcasts.

It’s not unusual today to see terms such as “traitor” and “treason” in USA Today and other corporate media applied to President Trump because of his relationship with the man U.S. media increasingly love to refer to as Russia’s “thug” leader, Vladimir Putin.  Still, as valid as the story of Russian interference may be, is it worth this “tsunami of coverage”, media critic Norman Solomon asks? And why, in this “tsunami”, are there so many missing elements to the story?

“It’s very rare … to see any mention of the fact that each country, Russia and the US, has several thousand nuclear weapons basically pointed at each other,” Solomon says, “4,000 in each country … at the ready to basically be able to incinerate, not just the two countries, but billions of people on the planet.”

Trump has rankled not only liberals and the Democratic Party but also corporate interests because of his trade policies and also military-industrial interests that would love to see another Cold War, or even hot war, with Russia.

Missing in all this discussion is a sense of history and awareness of the utter hypocrisy of much of the U.S. hand wringing about outside interference in a sovereign nation’s politics. Politicians on both sides of the aisle join in this hypocrisy.

Trump loves to wave his saber at Iran, threatening it and raising the specter of yet another war as if the American people weren’t sick to death of war after 17 consecutive years of it.

Why is Iran no longer the close U.S. friend that it was under the pro-Western rule of the Shah of Iran?  Let’s examine.

When Mohammed Mossadegh became Iran’s prime minister in 1951, Iranians cheered at his strong stand against the British-owned Anglo-Iranian Oil Company that had soaked Iran’s resources while only paying back as much as 16 percent of its profits.  England’s response was to join with the United States in launching Operation Ajax to oust Mossadegh and install in his place a CIA puppet. They succeeded, and the Shah subsequently consolidated his rule into a dictatorship that lasted until the Iranian Revolution of 1979.

A long list of countries could be added to Honduras, Yemen, Colombia and Iran as examples of U.S. political interference—Guatemala, Libya, Vietnam, Cuba, Chile, the Democratic Republic of Congo, among them.
Let’s look at Guatemala. When Guatemalan President Jacobo Arbenz Guzmán tried to redistribute land to benefit the legions of poor in his country in 1952, the United Fruit Company raised a hue and cry in Washington, D.C., which was all the CIA needed to get its tentacles into the country and assist with Guzmán’s overthrow in 1954.

And we have to have a few words about Vietnam. Now there’s a story. Consider the U.S.’s crucial supportive role in Ngo Dinh Diem’s consolidation of power in South Vietnam in the mid-1950s, and then in his overthrow by South Vietnamese generals in 1963. That coup d’etat, intended to find a more suitable leader in the fight against the Communists, resulted in the United States’ irrevocable involvement in Vietnam’s political future and the bloody war that lasted into the 1970s.

I could go on, but this is not a book.

Joseph B. Atkins is a veteran journalist and professor of journalism at the University of Mississippi. His blog is http://www.laborsouth.blogspot.com. A version of this article appeared recently in the Jackson Free Press in Jackson, Mississippi.