Bread "crumbs" found in fireplaces used by hunter-gatherers 14,000 years ago predate agriculture by thousands of years 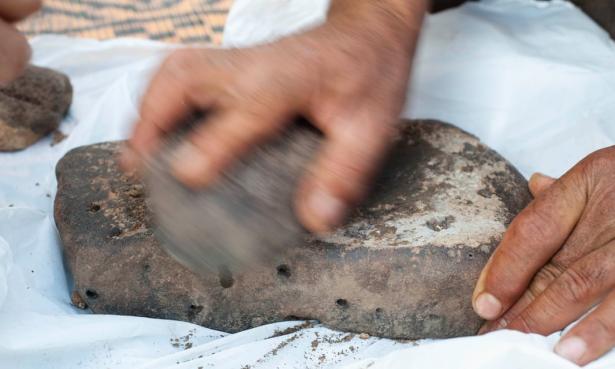 An archaeologist grinds some club-rush for experimental production of flour. , Alexis Pantos/PNAS

Charred crumbs found in a pair of ancient fireplaces have been identified as the earliest examples of bread, suggesting it was being prepared long before the dawn of agriculture.

The remains – tiny lumps a few millimetres in size – were discovered by archaeologists at a site in the Black Desert in north-east Jordan.

Using radiocarbon-dating of charred plant materials found within the hearths, the team found the fireplaces were used just over 14,000 years ago.

“Bread has been seen as a product of agriculturist, settled societies, but our evidence from Jordan now basically predates the onset of plant cultivation … by at least 3,000 years,” said Dr Tobias Richter, co-author of the study from the University of Copenhagen, noting that fully-fledged agriculture in the Levant is believed to have emerged around 8,000 BC.

“So bread was being made by hunter-gatherers before they started to cultivate any plants,” he said.

Writing in the journal Proceedings of the National Academy of Sciences, Richter and colleagues from Denmark and the UK describe how during excavations between 2012 and 2015 they found the crumbs in the fireplaces of a site used by hunter-gatherers known as Natufians, who foraged for wild grains.

Among the remains, the team unearthed small, round tubers of a wetland plant known as club-rush, traces of legumes and plants belonging to the cabbage family, wild cereals including some ground wheat and barley – and 642 small charred lumps.

Analysis of 24 of these lumps revealed they are bread-like – with the others expected to be similar.

“They are charred breadcrumbs, sort of what you might find at the bottom of your toaster at home – the sort of stuff that falls off when you put it on high power,” said Richter.

Some of the crumbs were also found to contain ingredients from other plants, with the team saying club-rush tuber is the most likely candidate.

What’s more, the analysis of the crumbs suggests the flour used to make the bread might have been sieved, while the team say the lack of an oven means the bread was probably baked in the ashes of the fire, or on a hot stone.

The team say the crumbs appear most likely to be from a sort of unleavened flat bread.

While the newly discovered crumbs are now the earliest bread remains found so far, taking the title from remains found at the site of Çatalhöyük in Turkey and dated to about 9,100 years ago, the team say the food might have emerged even earlier.

“Food remains have long been ignored in archaeology, and therefore have not been sufficiently studied,” said Amaia Arranz-Otaegui, first author of the study from the University of Copenhagen. “I’m sure that if we look at older sites, we may find bread-like cereal products during the Paleolithic [for example] 25,000 years ago.”

Richter said it is unlikely the bread found at the Natufian site was consumed as a staple, given it would have been very labour intensive to gather and process the grains. While the team suggest the bread could have been made by the hunter-gatherers for their onward journey, they say other evidence adds weight to the idea it could have been part of a feast or ritual event.

“[The older fireplace] also had a number of gazelle [bones] in it from at least a dozen or more animals as well as water birds and hare,” said Richter. “So it looks like a bit of a meal [shared] between a larger group of people, like a little feast that was then discarded in the fireplace.”

Amy Bogaard, professor of Neolithic and bronze age archaeology at the University of Oxford and who was not involved in the research, described the study as fascinating. “We previously knew that these communities were grinding and preparing plants in various ways, but this study is the first to identify actual bread-like remains of this early date,” she said. “ In terms of food history, it suggests that preparation of flatbread-like foods long predates the establishment of agriculture, and that farming in this region emerged within a pre-established culture of grinding and baking.”

While the team have yet to recreate the recipe, Richter says they have tried bread made with club-rush tubers, offering a clue as to how the ancient bread might have tasted.

“It tastes a little bit salty, so it is probably not to our particular tastes in the present,” he said.

Since you're here… we have a small favour to ask. More people are reading the Guardian’s independent, investigative journalism than ever but advertising revenues across the media are falling fast. And unlike many news organisations, we haven’t put up a paywall – we want to keep our journalism as open as we can. So you can see why we need to ask for your help.

The Guardian is editorially independent, meaning we set our own agenda. Our journalism is free from commercial bias and not influenced by billionaire owners, politicians or shareholders. No one edits our Editor. No one steers our opinion. This is important because it enables us to give a voice to the voiceless, challenge the powerful and hold them to account. It’s what makes us different to so many others in the media, at a time when factual, honest reporting is critical.

If everyone who reads our reporting, who likes it, helps to support it, our future would be much more secure.