Congress is quietly trying to finalize the farm bill. Surprise, surprise: Negotiations are beset by clashing, and likely irreconcilable, House and Senate visions for this omnibus legislation that shapes US agriculture/hunger policy for 5 years 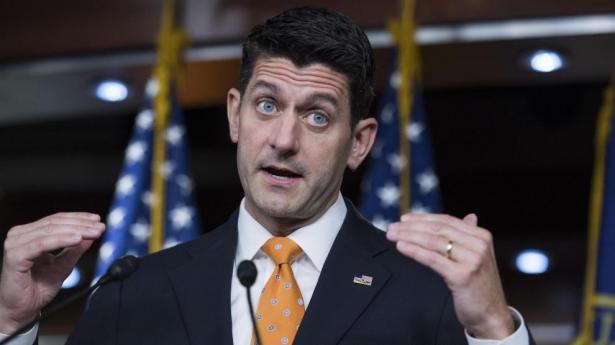 Paul Ryan is holding out for a farm bill provision that would kick as many as 2 million people off of food aid., Tom Williams/CQ Roll Call/Newscom via ZUMA/Mother Jones

As the world churns in Washington, Congress is quietly trying to finalize the farm bill. Surprise, surprise: Negotiations are beset by clashing, and likely irreconcilable, House and Senate visions for this omnibus legislation that shapes US agriculture and hunger policy for five-year intervals.

As I laid out in detail here, the stalemate centers on the Supplemental Nutrition Program (SNAP), formerly known as food stamps, the most important US anti-hunger initiative. The House version would ramp up work requirementson SNAP recipients, a move that the Congressional Budget Office estimated would bounce around 1.2 million people off of the program. Last week, the non-partisan think-tank Mathematica put the number at 2 million people—with about a third of the affected households containing senior citizens, nearly a quarter with children, and 11 percent with a disabled person.

The House farm bill would ramp up work requirements on food stamp recipients, bouncing an estimated 2 million people off of the program.

Lame-duck speaker of the House Paul Ryan (R–Wis.) has shown no sign of budging on SNAP.  He has clung to his chamber’s farm bill proposal as the culmination of his zeal to move poor people from “welfare to work”—even though work requirements on poverty programs have shown little potential to increase employment opportunities or reduce poverty. 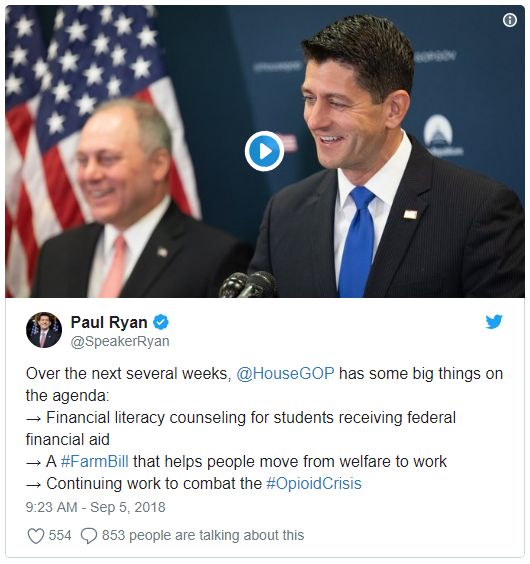 For their part, Senate Democrats have steadfastly refused to approve legislation that cuts off so many poor people from food aid—and they have the votes to block such a move. So the farm bill is moving rapidly toward its Sept. 30 expiration date with little chance of passing, and the “legislative calendar this month is packed and working days are running short,” Politicoreported Tuesday morning. As a result, Congressional leaders are “looking at the possibility of a temporary stopgap extension” of the previous farm bill “to buy negotiators more time.”

The House bill would make a valuable conservation program smaller and effectively slash its funding.

Meanwhile, farmers in key GOP House districts throughout the US heartland are struggling after years of low corn and soybean prices that have been pushed yet lower by President Donald Trump’s trade wars. That factor puts pressure on the GOP House to compromise on SNAP, Politico reports, because the farm bill also funds payment programs for corn, soybeans, and a handful of other crops, as well as crop-insurance subsidies.

But that political push might not be as strong as it looks on first glance, says Ferd Hoefner, a long-time farm bill observer at the National Sustainable Agriculture Coalition. In terms of commodity programs, the current House and Senate drafts are very similar to the previous farm bill (with one exception discussed below)—meaning that they “don’t offer additional help at all” to farmers struggling under Trump’s tariff brinkmanship. Merely extending the previous farm bill until the next Congress can take it up—which Hoefner thinks is the most likely scenario—would be roughly equivalent to passing either the House or Senate version in terms of funding for farm programs next year.

If GOP House leaders do relent on SNAP work requirements, they could push hard for other controversial wrinkles to their bill that aren’t in the Senate version. Here are the main ones:

• Preventing localities from regulating pesticides. Titled “Regulatory Reform,” Section 9101 of the House Bill would forbid “political subdivision[s] of a state”—i.e., counties, cities—from imposing their own restrictions on pesticide use. Here’s an interactive national map with links to city policies that could be threatened.

• Allowing wealthy farmers to grab crop subsidies. Under current law, farmers with more than $900,000 in annual income—$1.8 million for couples—are barred from receiving crop subsidies. “But Sec. 1603 of the House bill now under consideration would exempt certain farm partnerships, joint ventures and other corporate farms from the means test,” reports Environmental Working Group. “If included in the final farm bill, many millionaires and billionaires will no doubt reorganize their farm businesses to exploit this new loophole.”

• Gut a crucial conservation initiative. The Conservation Stewardship Program, as it’s known, offsets some of the costs incurred by farmers for implementing practices like cover crops to keep soil and fertilizer in place over the winter; buffer strips that prevent severe soil erosion from storms; and hedgerows as habitat for wild bees and other beneficial insects. As I explain here, the House bill would shove the CSP into a smaller program and effectively slash its funding.

Tom Philpott is the food and ag correspondent for Mother Jones. He can be reached at tphilpott@motherjones.com, or on Twitter at @tomphilpott.

IT'S TIME TO TALK ABOUT MEDIA BIAS

Mother Jones believes that journalism needs to stand for something right now.That the press is the enemy of secrecy and corruption. That reporting without a sense of right and wrong only helps liars and propagandists succeed. And that we're in this fight for the long haul.

So we're hoping to raise $30,000 in new monthly donations this fall.Read our argument for journalism that is fair and accurate and stands for something—and join us with a tax-deductible monthly donation today.

Or make a one-time gift.