Three months after the U.S. Supreme Court struck a potential blow to government employee unions by saying public workers don’t have to pay any union fees to hold government jobs, the decision appears to have had little effect in Hawaii.

Three months after the U.S. Supreme Court struck a potential blow to government employee unions by saying public workers don’t have to pay any union fees to hold government jobs, the decision appears to have had little effect in Hawaii.

“The real question is, will there be a mass of resignations?” Honolulu labor attorney Tony Gill said Monday during a forum on Janus v. American Federation of State, County, and Municipal Employees, Council 31. 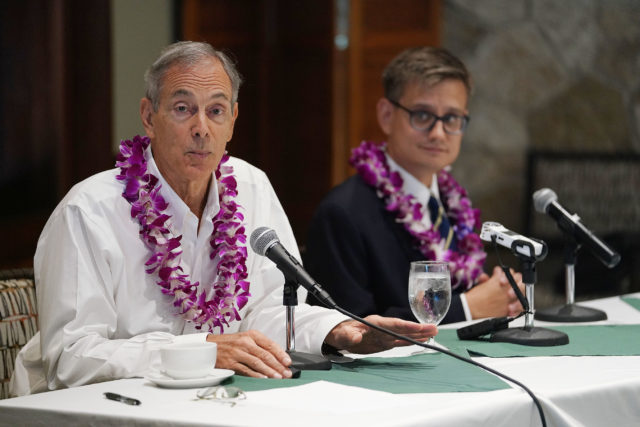 Sponsored by the libertarian-leaning Grassroot Institute of Hawaii, the lunch forum brought together Gill, a prominent Honolulu Democrat and labor attorney who represents unions, and Jacob Huebert, senior attorney with the Goldwater Institute, who represented appellant Mark Janus in the case.

Janus was an Illinois state worker who objected to having to pay union fees to help cover certain union expenses. The Supreme Court decades earlier had ruled that state labor laws could require employees to pay so-called agency fees to cover costs related to negotiating collective bargaining contracts, even though employees could opt out of being union members or funding union activities like lobbying. But the 5-4 Janus ruling handed down on June 27 reversed the court’s previous opinion, saying employees couldn’t be required to pay agency fees either.

The forum at Honolulu’s Pacific Club gave the public the opportunity to hear two leading legal minds discuss the decision’s implications in a strongly Democratic state where unions are woven deeply into the culture and political economy.

Many economists expect union members will quit paying agency fees as people realize they don’t have to contribute a portion of their paychecks every month to receive the same pay and benefits as union members who pay the fees. The idea is that even if employees believe in the union’s cause, many simply won’t keep paying dues if they don’t have to, the same way many people listen to public radio without paying to support their listener-supported local stations.

Others might not want to support the union at all.

But so far that hasn’t happened, said Gill, who represents the University of Hawaii Professional Assembly.

Other unions concurred. Caroline Sluyter, a spokeswoman for the Hawaii Government Employees Association, said in an interview that the union has lost only a handful of its 29,000 active members because of Janus.

Wilbert Holck, executive director of the Hawaii State Teachers Association, said the ruling’s impact on membership has been “statistically insignificant and minuscule.” 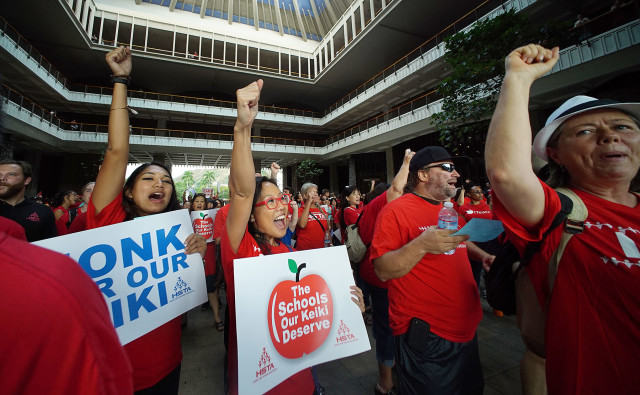 The dialogue between Gill and Huebert had more the tone of a scholarly chat than a contentious debate, although the attorneys did disagree on a few points. For example, when asked whether union members should have to sign up again after Janus to comply with the new law, Gill said that wouldn’t be necessary, while Huebert said the decision requires the unions to go back to their members and get them to sign up again.

While it might take time for unions to feel the effects of Janus on membership, lawyers are preparing more fights over such issues, as well as laws passed by states responding to Janus. In Hawaii, for example, Gov. David Ige, signed a bill in April that limits the time frame during which a union worker can opt out of paying union fees to a 30-day window pegged to the date the worker joined the union.

Asked whether the new law was constitutional under Janus, Gill acknowledged, “Probably not,” but added someone would have to bring a “concrete case” challenging the law.

That could happen sooner rather than later. Although Huebert has left the Chicago-based Liberty Justice Center, which funded the Janus litigation, his successor at the center said the organization was aware of the Hawaii law and reckoned there would be a challenge.

“If you look at the language in Janus, that 30-day period is almost certainly unconstitutional,” said Jeffrey Schwab, senior attorney with the center.

In the meantime, Hawaii unions like HGEA will continue to try to provide value to members, Sluyter said.

Gill and Huebert both said that, for all of the potential harm that Janus had done to public unions, the decision had given the unions a rallying cry.

“When there’s a threat to what you have and what you stand for, I think it does bring that to the table,” she said.