Here's how hard workers had to fight to have a semblance of dignity in a country obsessed with the gospel of frontier capitalism. 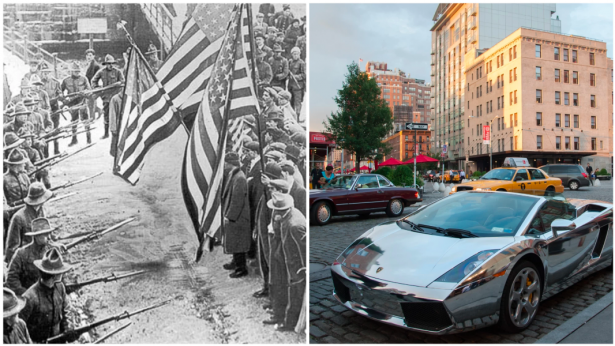 We are living in dark times for American workers.

As Erik Loomis explains in his recently-released A History of America in Ten Strikes, Ronald Reagan’s mass firing of striking air-traffic controllers in 1981launched a fit of union busting across the country, helping usher in what Loomis calls “the New Gilded Age.” In recent years in particular, he points out, “most unions have been pummeled.” Midwestern states that had long served as labor strongholds have taken a hard turn toward the right, with Wisconsin Governor Scott Walker signing a 2015 “right-to-work” law that decimated the state’s public-sector unions. (He previously gutted collective-bargaining rights for state employees.) The following year, the country elected Donald Trump to the presidency, in part due to what Loomis describes as “rhetoric about keeping factory jobs in the United States and demonizing immigrants and Muslims as our enemies… [bringing] back the worst tendencies of white workers to choose racism over inclusivity.”

Loomis’s book is unapologetically pro-labor—it’s been blurbed by Noam Chomsky, and tweeted about by Sorry to Bother You writer/director Boots Riley. In its pages, the University of Rhode Island history professor places the struggle for worker justice at the heart of the American story. As he explains in the book, this telling is itself a political act because of our national tendency to forget: "Americans’ shared memory—shaped by teachers, textbook writers, the media, public monuments, and the stories about the past we tell in our own families, churches, and workplaces—too often erases or downplays critical stories of workplace struggle…. We have a hierarchical society that has used propaganda to get Americans to believe everyone is equal. We are not equal. The law routinely favors the rich, the white, and the male.”

Loomis retells the American through the eyes of workers. From mill girls in Massachusetts, to coal miners in Pennsylvania, to bus drivers in Oakland, to auto workers in Michigan and Ohio, to janitors in LA, we watch as workers fight for their rights. In the second chapter, he notes that the biggest labor strike in American history took place during the Civil War, by way of slaves "withholding their labor from their masters, fleeing to Union lines, and forcing Lincoln and the North to recognize the new reality of their lives.” Without their actions, he argues, it's unlikely Abraham Lincoln would have issued the Emancipation Proclamation. Later, he peers behind the "facade of luxury and parties" of the 1920s to focus on impoverished workers having significantly less fun.

In some cases, the subjects of these chapters achieve gains we now take for granted, like eight-hour workdays or paid vacations. But often their efforts are suppressed by bloody counter-attacks by cops, the military, privately-hired security forces, or bloodless (but no less brutal) court decisions. By the time we make it to 2018, the tone of the book is once again grim. The decline of union membership means unions have less money to influence politics, which helped lead to to skyrocketing income inequality. And, in our current moment, “with the Republican Party unwilling to tolerate unions’ existence and many Democratic Party leaders lukewarm to unions, American workers have lost many of the gains of the entire past century,” he writes.

I recently caught up with Loomis to chat about the past—and this moment of darkness he calls “anti-union mania.”

VICE: This is a remarkably violent, bloody book, with countless beatings and deaths of strikers, and workplace accidents. I simply didn’t realize American labor history was this brutal. I think a lot of people probably don’t.
Erik Loomis: We live in this world that began in the 1930s, and then continued pretty much unabated until the 1980s, where labor was a pretty solid part of American society; where it was a semi-accepted partner at the table; where people knew people who were in unions and they weren’t going on bloody strikes. And that’s because the nation had set up a system of labor law that had made this unnecessary. But really the period up through the 1930s was one of tremendous violence. I think that the core response any time before then, any time there was any kind of labor movement at all that directly challenged power, you’d see the media talk about “revolution is coming to America,” how this needs to be violently crushed, that American freedom was at risk from the strikers. It was this really overheated rhetoric for even the most basic demands.

That overheated response is something we’re beginning to return to today. As that period between the 30s and 80s declines, and labor unions are now increasingly small and being destroyed by the courts, and by legislatures, and by employers, we’re turning back to a period where those boundaries on what workers can do and the response from employers are also fading. And so it wouldn’t surprise me in the future if we returned to that level of violence.

If that sounds like I’m describing today, there’s a reason for that.

When reading this, it occurred to me that if you take the sum total of American history, we are not a very labor-friendly country. How do we compare to the rest of the planet?
In the 1880s, you saw France and England beginning to merge labor politics into the national political realm. Employers were more accepting of unions. Unions would begin to play a larger part in the political establishment. And at the very same time, employers in the US are discovering new ways to crush labor, combining new trusts and things of this nature, and seeking to simply destroy unions entirely.

A big part of the reason is American mythology about individualism. The sort of “Pull yourself up by your bootstraps!” mentality is actually quite insidious, and it helps undermine any kind of class identity in America. It also gives cover for anti-labor policies. And so you have, today, the Scott Walkers of the world—he’ll basically say that unions are un-American. This idea that collective action is un-American comes out of this individualistic ideology.

So, to the Scott Walkers of the world who say—implicitly or explicitly—that unions are un-American, what do you say?
That it’s just an absurdity. The idea that America and fundamentalist free-market capitalism are the exact same thing is a myth. But it’s something I’ve run into more than once in my life when giving talks to people: that criticizing capitalism as it exists is criticizing America. And that’s not even in a talk calling for socialism. As I say to people: There are many, many forms of capitalism, and in the US, especially with the incredibly pernicious influence of people like Ayn Rand on American intellectual life, today’s ideas of free-market capitalism are an inherently fundamentalist ideology, an extremist ideology of capitalism that brokers no regulation, and no basic social safety net. Which is, of course, where the Republican Party is trying to push us.

You kick off the book with an anecdote about a Chicago teacher strike in 2016, and you write they wanted to “work and live with human dignity.” How do you define working and living with human dignity?”
Ideally, what worker power really means is being able to live a life based around the terms that you define. Your life has a certain level of comfort and your work has a certain level of comfort. So if you’re a teacher and your classroom is falling apart, and it’s 98 degrees in September, and nobody can learn, there’s no dignity that’s in there for anyone. The same [goes for] if you can’t make enough money to make ends meet. We’ve seen these teacher strikes in the last year in West Virginia and Oklahoma and in other places where teachers are talking about how they have to work two or three jobs. That’s not a dignified life—that’s a life of struggle. That’s a life where you’re just barely holding on.

While dignity is in the eye of the beholder, I think it is a world where workers can articulate the world that they want and have a reasonable chance of achieving that. And if they have the power to at least partially achieve that world, then I think they are probably living a life of relative dignity. And if they don’t, if they feel hopeless, then we have the sign of a sick society.

What advice would you give to today’s labor activists and organizers, based off of your knowledge of the past?
One is that any labor movement in the United States that’s going to be successful has to be racially inclusive. It has to be at the forefront of justice in many, many ways. And there are so many stories coming out after 2016… about “appealing to the working class.” Or “How are the Democrats going to appeal to the working class?” Which gets naturalized as the white working class, [and the idea] that the working class is not, for some reason, who the working class actually is: African Americans, Latinos, Native Americans, other people of color, and women. [This idea] that the working class is made up of white men. And article after article reinforced that. First of all... empirically, it’s wrong. It doesn’t really represent who the actual working class is. And then, from a moral perspective, if you’re trying to create policies that specifically appeal to white workers by not embracing undocumented immigrants, that’s a black hole. Because all you’re going to do is alienate what the actual working class looks like, and probably not attract these white people, either. So I think we have to learn from labor’s racist past and learn never to do that again.

Second is that in the end we can talk about solidarity and revolution and all that stuff, and all that is fine, but the reality is that if you want to make real, long-lasting change from the perspective of worker equality, there has to be a political strategy to do so as well. It can’t just be organizing and it can’t just be politics. It has to be both. And that’s critical because again, if the government is not neutralized in some way—and the only way it’s going to be neutralized is through workers electing the right people and holding them accountable—then they’re not really going to have very much success.

Finally is just to recognize that workers themselves are always going to lead. Even if the labor movement as we think of it now dies, if labor unions disappear or mostly disappear, workers are still going to be standing up for what they think is right. Workers are still going to be acting out in various ways. There’s always going to be some kind of labor movement. And we, who are interested, have to follow where workers are at and allow them to lead—and hopefully harness that political power to create better conditions for all.

This interview has been lightly edited and condensed for clarity. Learn more about Loomis's book here.