Republican Judges Swept Out by Voters in Harris County Election

A sweep of elected Republican judges in the Nov. 6, 2018 election has left only Democrats on the bench at the Harris County Texas Criminal Courthouse. 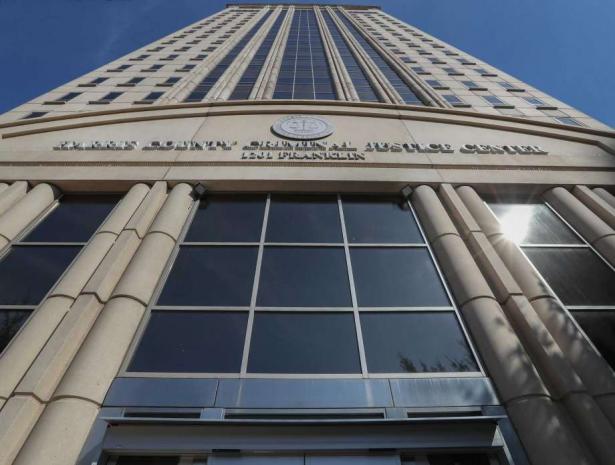 A voting surge cleared the Harris County courtrooms of all elected Republican judges, leaving only Democrats on the bench in civil, criminal, family, juvenile and probate courts.

Tuesday’s sweep — the final blow after years of winnowing down of GOP judges since 2008 — put Democrats in all 59 seats that were on the ballot. Only one Republican, Brock Thomas, who was hired to oversee a special drug court, remains on the bench in Harris County.

The upheaval has raised questions among lawyers and defendants about what happens next, but James M. Douglas, law professor at Texas Southern University and president of the Houston Chapter of the NAACP, said not to worry.

He and other Democrats said it was heartening to see judges more reflective of the county's demographics.

Among those elected were 17 black women who were part of a group that worked together to get elected. The other two members of the so-called Houston19 were already presiding over state district court and fell short in a bid to move to appellate court. They will remain state district judges.

Dedra Davis, who was elected to civil court, said the group represented more than 220 years of experience and are ready for public service. She said the Republicans did not want change.

“A little more fairness, a little more impartiality, and a little more equality is coming, and not everybody’s happy about that. Their bottom line is going to change,” she said. “Lawyers who made $500,000 a year from their relationship with a judge who always gave them appointments aren’t going to see that anymore.”

Davis said many civil judges who have held their benches for years have stopped reading pleadings and filings in cases and instead just make decisions on the spur of the moment, when the litigants appear before them.

“The pleadings need to be read and reviewed for you to be fair and give an informed decision about what’s going on,” she said.

She also said campaign finance — in which lawyers raise funds and donate to judges — has led to doubts about the fairness of longtime judges.

“At the courthouse, when you look at (campaign finance) reports, you can often see why the rulings are what they are, which have nothing to do with what’s been said in the court,” Davis said. “That’s not how it should be. It should be fair and impartial.”

Harris County’s longest serving state district judge, Michael McSpadden, who oversees a felony court, said he was honored to spend 36 years on the bench but that straight-ticket voting combined with enthusiasm for Democratic Senate candidate Beto O’Rourke was the undoing for Harris County’s GOP.

“Straight-ticket voting determines elections,” he said. “It’s happened to both sides over the years.”

McSpadden found himself in a firestorm of protests earlier this year over his comments on black men’s attitudes toward the criminal justice system. He said it “wasn’t pleasant” going through the protests, but that his election was more about O’Rourke than about him.

“I have no regrets about losing,” he said. “These are not our courts and everybody has a chance to run and a chance to win. … I wish all the new judges well, because the safety of Harris County is going to depend on them.”

He and Douglas agreed that judges should not be elected along partisan lines. Both men, who have long careers in the law, said forcing judges to belong to a party can keep bad judges in office too long or oust good judges, with voters knowing very little about the quality of the judge.

“At the end of the day, you want to make sure that all judicial selections are informed decisions,” Douglas said. “And there are so many names on the ballot now, that it’s hard to know who everyone is. I don’t know how you can make an informed decision today.”

Mark Jones, a political science professor at Rice University and the author of a 2017 report on the selection of judges in Texas, said Tuesday’s election may lead to calls for reforming judicial elections.

“We are one of the few states that elect partisan judges,” he said. “The most popular method is judicial nominating commissions.”

He said unless Harris County’s partisan vote is effectively a tie, the majority party will continue to sweep all of the seats.

“The biggest impact is that we have a 100 percent Democratic bench here in Harris County and we saw the impact sweep even higher, into the 1st and 14th Courts of Appeal,” he said.

In response to questions about no elected Republicans left on Harris County benches, Paul Simpson, Chairman of the Harris County GOP, released a broad statement that he was mad and determined.

“I am mad. Mad at the avoidable losses wreaked across Texas by the Beto wave of straight-ticket votes,” he said. “That straight-ticket wave turned Fort Bend County Democrat, defeated Republicans on appellate courts across Texas, elected Democrats across the state to Congress and the Legislature, and swept every countywide vote in Harris County.”