Chief Justice Roberts' Rebuke of Trump Is a Warning Shot

Trump once again impugned the legitimacy of a judge who ruled against him. Chief Justice Roberts drew a line in the sand. 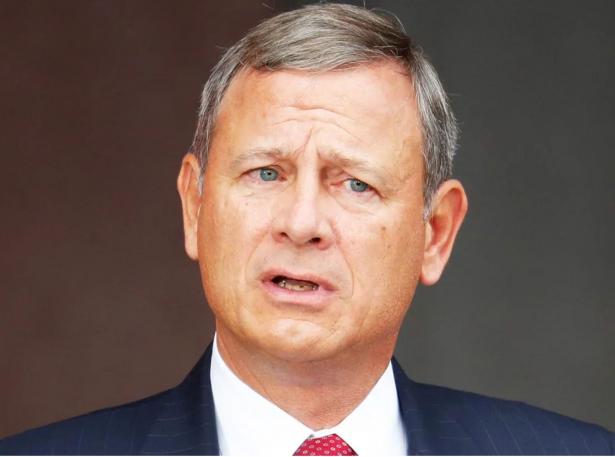 Chief Justice John Roberts’s stinging rebuke of Donald Trump is unprecedented in recent Supreme Court history. It is his first shot fired in a long battle that will likely occupy much of 2019: Trump vs. the Supreme Court.

The rebuke stemmed from Trump’s criticism Friday of the “Obama judge” who (temporarily) ordered the administration to continue taking asylum applications. Trump took aim both at the district court judge in the case and the entire Ninth Circuit, which has heard several high-profile immigration cases:

Chief Justice Roberts, in an extremely rare statement, replied, “We do not have Obama judges or Trump judges, Bush judges or Clinton judges. What we have is an extraordinary group of dedicated judges doing their level best to do equal right to those appearing before them. That independent judiciary is something we should all be thankful for.”

While many have treated the entire give-and-take as some kind of political spat, in fact it is a confrontation of historic proportions about the very nature of American democracy—and a taste of what is to come.

Most likely, the Roberts Court will be remembered according to how it stands up to Trump’s antinomian, anti-democratic actions. The Mueller investigation is proceeding, and the incoming, Democratic-led House has promised to launch several more. Numerous high-profile lawsuits against the Trump administration and against Donald Trump personally are still percolating through the system.

Many of these, it seems certain, will reach the Supreme Court in 2019.

So will a number of cases confronting the Trump administration’s repeated challenges to the rule of law. The asylum case is one. Cases on family separation and sanctuary cities. “Censusgate” and other scandals. Even the plethora of suits challenging the Trump administration’s rollbacks of environmental, health, safety, education, and wilderness preservation rules are, in large part, about whether these political actions followed the law or ignored it.

And ultimately, if Trump is himself charged with obstruction of justice, first the question of whether a sitting president may be criminally charged, and second the actual case itself will surely get to the Court in one form or another.

That’s what is at stake in Justice Roberts’ rebuke. The opening battle lines are being drawn for a terrifying test of our nation’s constitutional principles. Some on the left bandy words like “fascist” about rather carelessly, but Trump has already acted in numerous ways that are anti-democratic in the extreme: delegitimizing any judge who rules against him; pardoning Joe Arpaio, who racially profiled and imprisoned people in brutal conditions; and we have just learned, ordering his own White House counsel to prosecute Hillary Clinton.

That’s not just some gutsy political move. It is using the legal and police machinery of the state against a political adversary. That is what dictators do. And only former-White House Counsel Don McGahn’s judgment stopped it from happening.

Now, many believe that the Court has already failed its first challenge: the travel ban case, Trump v. Hawaii, in which a decision by Chief Justice Roberts set aside Trump’s clear statements supporting a “ban on Muslims entering the United States” and focused only on the subsequently proffered reasons for the “travel ban.”

But that case was closer than it appeared. Yes, obviously, Trump had promised to ban Muslims. But the version of the ban was upheld was heavily revised, included a non-Muslim country, and was based on a large body of evidence amassed by the Departments of State and Homeland Security.

That evidence may be debatable, but it’s not nothing, and the Court would have had to totally overrule a host of government findings (on national security, no less) in order to overturn the ban. That was the basis of Chief Justice Roberts’s opinion.

Moreover, the Chief Justice has refused to take Trump’s bait on numerous occasions. On the campaign trail, Trump excoriated Chief Justice Roberts—who actually has an extremely conservative voting record—because of his 2012 decision upholding Obamacare. Indeed, back when that decision was announced, Trump tweeted “Justice Kennedy should be proud of himself for sticking to his principles, in light of Justice Roberts’ bullshit!”

Chief Justice Roberts has also remained silent in the face of Trump’s numerous tirades against the Ninth Circuit, which is indeed more liberal than most, just as the Fifth Circuit is more conservative than most.

But to specifically politicize and partisan-ize individual federal judges was apparently a bridge too far—perhaps especially in light of the extremely partisan confirmation battle of Justice Brett Kavanaugh.

Ironically, at that time, liberals were complaining that Kavanaugh’s was a highly political, partisan nomination (before, of course, accusations of sexual assault swept other issues off the stage) and conservatives, and Kavanaugh, were insisting that judges are apolitical. Now, it’s the Right alleging politicization.

But Trump is not a pundit or a senator or a professor on television. He has the opportunity, as his hero Andrew Jackson did two centuries ago, to order the executive branch to obey him instead of the law. Indeed, he has already done so, only to be refused by officials he subsequently replaced. He clearly has no compunction to do so, or perhaps even understanding about what it would mean.

And when it happens, when Trump faces off squarely against the rule of law, that will be the defining crisis of the Court which will either stand up to him—or won’t.

Jay Michaelson is the legal affairs columnist at The Daily Beast. He primarily covers law, religion, sexuality, and environmental issues, with an occasional arts review now and then. Jay often appears on CNN, NPR, MSNBC, and other outlets, and has a second career as a rabbi and meditation teacher. He holds a J.D. from Yale and a Ph.D. in Jewish Thought from Hebrew University, and his six books include the bestselling God vs. Gay? The Religious Case for Equality and The Gate of Tears: Sadness and the Spiritual Path.

Send him tips: tips@thedailybeast.com. You can also use our anonymous document submission system, SecureDrop. Click here to find out how.