Why I’m Standing With LA Teachers 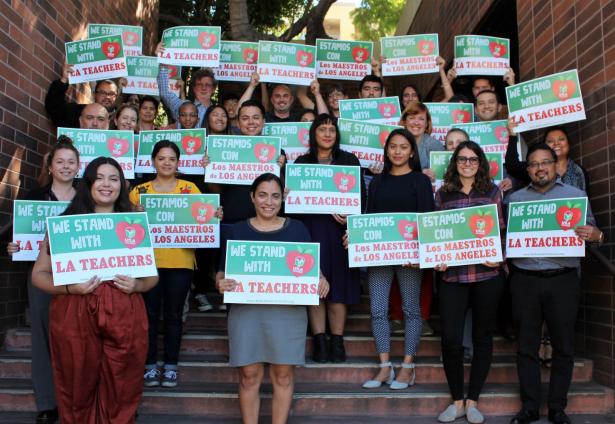 2018 has been a pivotal year for teachers. In West Virginia, Oklahoma, Arizona, Kentucky, Colorado, and North Carolina, teachers walked out of their classrooms and into the streets, demanding their grievances be addressed. This fall, fifteen school districts across Washington state started the school year on strike. Here in Los Angeles, the teachers’ union is engaged in tense negotiations and teachers have overwhelmingly voted to authorize a strike if no resolution is reached. We’re finally having a national conversation about the value of educators — and public opinion is on the teachers’ side. According to recent polling, 78% of Americans would support teachers who go on strike over pay issues.

At LAUSD, our children report to packed classrooms where they often have to share desks. If they get hurt on the playground, the school’s part-time nurse might not even be on campus that day. Many schools are cutting the hours of librarians, counselors, psychologists, and social workers — sometimes to less than one day per week.

Meanwhile, their teachers are being pushed out of the neighborhoods where they teach as the cost of housing increases despite their salaries remaining stagnant. Teachers spend thousands of dollars out of pocket on basic supplies each school year, often aided by online crowd-sourcing platforms where sympathetic acquaintances can help buy dry erase markers and other classroom necessities. More and more, teachers are moonlighting as drivers for rideshare apps or applying for retail jobs to make ends meet. In fact, one in five public school teachers will be forced to hold a second job during the school year.

This is personal for me, as a mother of two kids enrolled in LAUSD public school. My family loves our school, and the wonderful experience we’ve had there is thanks first and foremost to my kids’ teachers. It’s important to me that the teachers who are molding my kids in their hands every day are treated with the respect they deserve.

While no one wants a strike, someone is going to have to give. And if we truly value our kids’ futures, it shouldn’t be the teachers who have to sacrifice. Let’s be honest — college-educated young people don’t choose to be public school teachers for the paycheck. They become teachers because they care about our kids and want to help them learn, think, and grow into the next generation of leaders, creators, and scientists. And the teachers’ bargaining platform represents that.

Los Angeles teachers are asking for more than just a well-deserved pay raise. They are also demanding smaller class sizes, less mandatory testing, an increase in per-pupil funding, and more adults like nurses, librarians, social workers, and counselors on campus. Teachers are also calling for an end to so-called “random” searches that overwhelmingly target black and brown students, and pushing to establish support services for families in immigrant communities. Again, LAUSD is the second-biggest school district in the United States; a victory here could set a precedent for the rest of the country, and allow kids from coast to coast to grow up in safe, healthy, supportive learning environments.

This year marks the 25th anniversary of my organization, the Los Angeles Alliance for a New Economy (LAANE). Since our inception, our vision has been to leverage the power and the potential of our government, and our public institutions and resources for the common good. That’s the very same vision for which our teacher are bargaining today. Public education is a core public institution; one that is the foundation of generational progress. The teachers’ fight is a fight for our working communities, for our children, and for our future.