Congressman John Delaney of Maryland nominated Chef Jose Andrés for a Nobel Peace Prize in honor of his work in feeding people in disaster zones, from Puerto Rico and Guatemala to the recent Camp Fire in California. 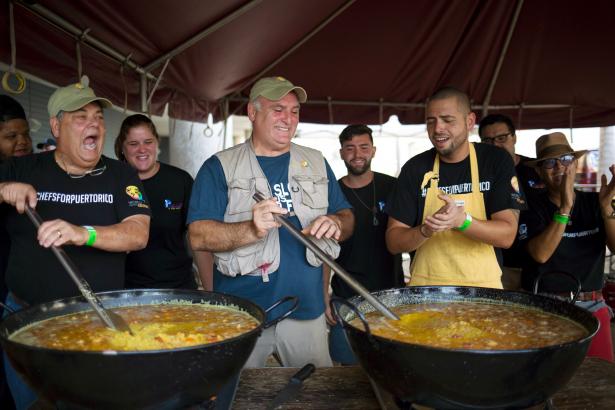 Celebrity chef José Andrés rushes toward disaster zones. In the past year, there have been a lot of them. When fires ravaged California last summer, Andrés and his organization World Central Kitchen (WCK) organized local chefs and volunteers to make dishes of piping hot food for firefighters and Californians evacuated from their homes. He spent this Thanksgiving doing the same for Camp Fire survivors, along with fellow chefs Guy Fieri and Tyler Florence. WCK has been on the front lines to feed people after the Fuego volcano exploded in Guatemala, and once again in Panama City after Hurricane Michael made landfall. And perhaps most memorably, Andrés established himself as a leader in Puerto Rican relief effort after Hurricane Maria ravaged the island, where he and his team fed thousands and thousands of American citizens when the federal government did not.

For these reasons, and many others, Congressman John Delaney of Maryland nominated Andrés for a Nobel Peace Prize. The Washington Post reports that Delaney's submission read:

Because of Mr. Andrés’s work, millions of people have been fed. This is the most basic human need and Mr. Andrés has proven to be world-class in this essential humanitarian field. With an incredible spirit and an innovative mind, Mr. Andrés is solving one of the world’s ancient problems and supplying world leaders with a new road map to provide more effective disaster relief in the future.

Andrés has been a vocal critic of President Trump. The two first faced off in a lawsuit after Andrés cancelled plans to open a restaurant in Trump's D.C. hotel after Trump spewed racist slurs about immigrants on the 2016 campaign trail. The lawsuit was settled last year, though the details were kept under wraps. Andrés, an immigrant himself, is a proponent of immigration reform and the vital role it plays in the food industry. More recently, he publicly criticized Trump's disgustingly negligent attitude toward Puerto Rico after Maria, while mobilizing WCK within days of the storm.

WCK, which Andrés founded in 2010 after the earthquake in Haiti, organizes local chefs, local produce, and local volunteers in the wake of disasters around the world to feed those who need it. It also emphasizes education and sustainability, so these communities can be more self-reliant as they recover and rebuild. In addition to his humanitarian efforts, Andrés runs nearly 30 restaurants around the world.

Upon hearing the news of his nomination, the chef said, “Oh, wow... They nominate everybody.” But he added that the nomination showed "that food every day is having a bigger impact" in U.S. politics.

The Nobel laureates will be announced next October; last year, more than 300 candidates were nominated. Andrés more than deserves his place among this year's class.

This article has been updated to reflect that Congressman John Delaney represents Maryland.