The Left Case Against Open Borders -- A Review

A long-time immigrant rights activist offers a critique of The Left Case against Open Borders, by Angela Nagel. 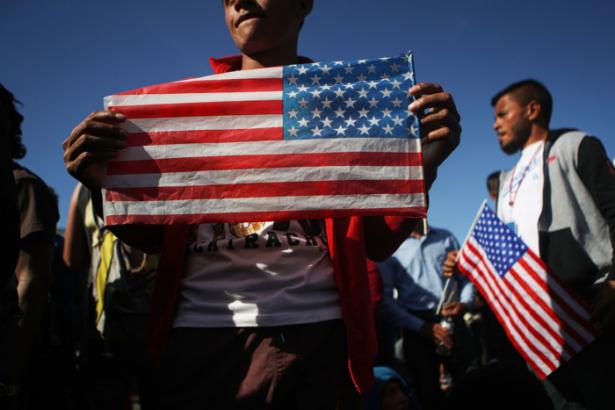 Migrants march with American flags, shortly before some evaded a police blockade and rushed toward the El Chaparral port of entry in Tijuana, Mexico., Mario Tama/Getty Images

Tens of thousands of Hondurans, El Salvadorans and Guatemalans are fleeing  hunger and death. Usually they do not flee in caravans but alone or with their immediate families. Caravans are formed for protection from crimes, assault, rape and extortion. As the Exodus Caravan from Honduras has reached our borders, there is a heightened sense of fear in the nation promoted by Donald Trump and his administration.

To  begin with, the caravan of poor people at our border should not be stopped.  Instead, those eligible for refugee status should be admitted required by the 1951 UN Convention on the Status of Refugees, the Universal Declaration of Human Rights (1946) and current U.S. law.

When writers  propose an immigration policy and a critique of a movement, it is important to get the story right. People’s lives depend upon it.

In the article, “The Left Case against Open Borders”, writer Angela Nagel  (American Affairs Journal https:americanaffairsjournal.org/2018/11/the-left-case-against-open-bor…) gets most of the economic conditions correct, but like Trump, she argues without evidence that the problem is that  unions, the Left and immigrants’ rights activists support “open borders”.

Atossa Araxis Abrahamian,  in the Nation online on November 28,  describes the peculiar lineage of Nagel’s writing and review some of the literature she sites (https://www.thenation.com/article/open-borders-nationalism-angela-nagle/).

In the following I deal with the false accusations about the role of unions  in the immigration policy debates.

Let’s try a thought experiment.  Imagine that no one advocated open borders. How would that change the lived conditions of these refugees?  Not at all.

The  Angela Nagel essay has many positive features including the descriptions of how global neoliberal capitalism, including NAFTA,  causes many of the major problems of migration.

However, Nagel is wrong  in asserting that the left and labor favor open borders. This is accepting the false narrative of Trump and the anti- immigrant forces as an accurate description of their opponents’ views.   They are not.

There has been a long and well developed movement for immigration reform, along with connected policy proposals – few of which argue for open borders. Progressive  policies and practices have emerged from within U.S. communities and the labor movement.  The writer seems to not be aware of this history. Instead she describes critics of the current attacks on immigrants as “Useful Idiots.”

She notes the Reagan Administration policy  known by Republicans as amnesty without noting that the  Simpson- Mazolli Act was the consequence of a multi- year struggle for immigration reform by both corporate forces and community groups.

This  Immigration Reform and Control Act of 1986 bill permitted the legalization of some 2 million farmworkers and over 4 million others already living in the U.S.  This program was a hard fought product of years of struggle by immigrants’ rights activists and their allies.

In addition to providing a path to legalization for many already here, the act required employers to attest to their employees immigration status  and made it illegal for hire or recruit undocumented workers. These provisions were known as employer sanctions.

In 1994, a Republican led Congress, with the support of 102  Democrats, passed the North American Free Trade Act, the economic construction that provides for free trade of goods and services but did not change immigration law. The promise made by NAFTA supporters was that the new trade regime would significantly reduce immigration.  Instead, NAFTA impoverished millions of small farmers in Mexico and drove many of these workers to migrate to the U.S.

In 1996 the Republicans passed and Bill Clinton signed the Illegal Immigration Reform and Immigrant Responsibility Act of 1996, a repressive bill that  provided for the construction of fencing along the border and criminalized many factors of immigrant life. Over the decade there were numerous appropriation bills to provide increased funding for the Border Patrol,  militarization and fencing of the border.

In 2005 when Republicans pushed the Sensenbrenner bill , the Border Protection, Antiterrorism and Illegal Immigration Control Act of 2005 , unions with significant immigrant membership worked with immigrants rights groups to muster over 1 million into the streets in protest around the country on May 1, 2006,  to kill the bill. They did demand a new amnesty for workers already here, this is what the Republican nationalists call a demand for open borders and mass migration.

Nagel argues: “There is no getting around the fact that the power of unions relies by definition on their ability to restrict and withdraw the supply of labor, which becomes impossible if an entire workforce can be easily and cheaply replaced. Open borders and mass immigration are a victory for the bosses.”

Nagel argues that support for restrictionist  positions on immigration can be found in labor history.   Yes, organized labor has long had two traditions on immigration; one urged restriction of immigration, the second urged recognizing that immigrants were here and sought to organize  them into unions. Certainly there are instances of organized labor being anti immigrant, such as in the Chinese Exclusion Act. However she uses her history very selectively for example ignoring the unionization of the Industrial Workers of the World , the CIO  and Packinghouse Workers among many. BTW. the socialists in labor were almost always on the side of supporting unionizing immigrant workers- not of building walls.

Seeking to support her claim, Nagel cites as evidence references to the UFW strike in 1969 ( I think she means 1973).  In the strike mass Immigration was not the issue confronted by the UFW, it was strike breaking. The author, an Irish writer, may not know that the UFW has organized undocumented labor, has helped tens of thousands to  achieve their legalization papers and has proposed more immigration and the protection of farm worker rights. The actual history of the UFW contradicts her thesis and the photo of Cesar Chavez used to promote the essay is -at best- a deception.

It would help for the writer  to be better informed on the immigrants’ rights movement and the labor movement.  If you are going to describe union’s approaches to immigration, you should deal with union sources, not the Koch Foundation funded think tanks she currently relies upon.

In 1999 and 2000 The AFL-CIO changed its policy and no longer supported efforts prior efforts that blamed workers for migration.   Since the 2000 change of federation policy several unions have changed their stance and work to organize immigrant workers rather than trying  to keep them out of the country, but these unions have not argued for open borders.

The left and unions are not promoting open borders, they are defending workers- some of who are undocumented.  Workers with legal status are a product of the biases in current immigration law including per country caps on granting visas.

Angela Nagel is the author of a prior book Kill All Normies.  Her criticism of immigration politics  seems , like her book, to be informed by  a class of pundits and hash tag politics  rather than a  working knowledge of U.S. labor unions and their history in dealing with immigration.

In her essay Nagel  describes well several  aspects of global finance and NAFTA.  Yes, there are real problems with NAFTA.  But, NAFTA was and is a neoliberal project, not a left project nor a union project.   Rather than accepting the neoliberal argument that the U.S. has benefitted from migration, it would be more accurate to argue that certain corporations and industries and their  owners have benefitted in the U.S., Canada and Mexico. The lobbyists from these industries dominate finance and the foreign policy establishment and they promote the reconsideration of NAFTA.  Other corporations and most workers are harmed by the current exploitation of illegal migration- such as in farm labor and construction. The winning corporations externalize their own costs to the entire society and take little responsibility for their actions including the destructions of entire communities.  Under CAFTA, (Central America Free Trade Agreement) for example, the U.S. military is active in Honduras and other parts of Central America paid for by us all for the benefit of specific corporations not to the benefit of the people of the U.S.

Angela Nagel makes her most useful point when she argues in the conclusion,   “The proper response, therefore, is not abstract moralism about welcoming all migrants as an imagined act of charity, but rather addressing the root causes of migration in the relationship between large and powerful economies and the smaller or developing economies from which people migrate. “

Most labor and left advocates of immigration reform would agree with her assessment of the need to address the root causes of migration.   See for example, Bacon,  The Right to Stay Home: How U.S. Policy Drives Mexican Migration (2013)

These are the workers discussing the future of immigration and how it will affect their work lives, their unions, and their families.

The growth of neoliberal corporate capitalism and the global markets produce a few winners and millions of losers including millions of migrants.

The actual alternative to the current existing  immigration policy is not “ open borders”- it is enforcement of existing employment laws as a first step, followed by the development of new employment and immigration laws, leading to a fair, pro worker  system of immigration.

Further, positive immigration policy will probably not be created from policy think tanks.  In the last 50 years immigration policy was shaped by what could be passed through Congress, not what ought to be policy.  A policy that the left might favor such as the control of capital is not likely to pass the Congress.

An enlightened policy on immigration is more likely to emerge from  including leaders and activists from the multi-racial (and significantly immigrant) working class in conversations and  cooperation with left forces in other countries, each of which also has its own labor movement.

By seeking to shift  the narrative to allegations of supporting  “open borders”, both Trump nationalists and neoliberal advocates avoid discussion of  the neoliberal economic system we currently have that produces migration.

Without changing U.S. trade policy and ending structural adjustment programs and neoliberal economic reforms, millions of displaced people will continue to migrate, no matter how many walls are built on the border.

Changing corporate trade policy and stopping neoliberal reforms is as central to immigration reform as gaining legal status for undocumented immigrants.  There is a fundamental contradiction in the bipartisan policies in Congress that promote more free trade agreements, and then criminalize the migration of the people they displace.  Instead, Congress could end the use of the free trade system as a mechanism for producing displaced workers.  That would mean delinking immigration status and employment.  If employers are allowed to recruit contract labor abroad, and those workers can only stay if they are continuously employed (the two essential characteristics of guest worker programs), then they will never have enforceable rights.

The Right To Migrate, The Right To Stay Home by David Bacon NACLA Report on the Americas (Volume 50, 2018 - Issue 3)

[Duane Campbell has over thirty years of experience working with unions and immigrants’ rights organizations.  He is currently a co-chair of DSA’s Immigrants” Rights Committee]