First as Farce, Then as Tragedy

Donald Trump wants to destroy the 14th Amendment's guarantee of birthright citizenship. But before he sought to eliminate it outright, his elite predecessors mangled, misread, and misused the amendment in the service of capital. 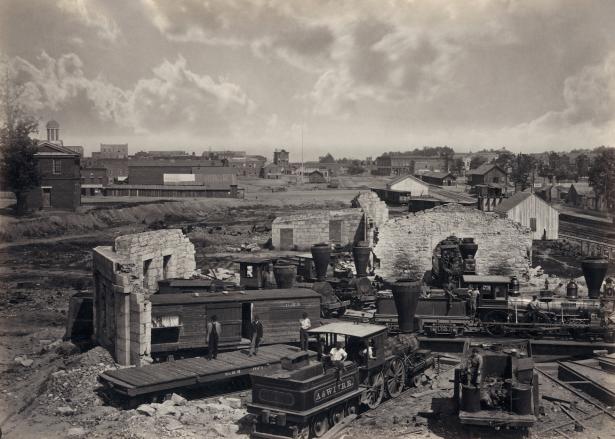 Atlanta's rail yard and roundhouse shortly after the end of the Civil War, Library of Congress

Donald Trump’s unconstitutional threat to decree an end to the Fourteenth Amendment’s guarantee of national birthright citizenship has brought renewed attention to the original intent of the Republican Congressmen who framed the amendment — to mandate national citizenship for all Americans — and the Supreme Court’s subsequent extensions of that guarantee to other groups. But, though largely forgotten in the recent commentary, there is another side to Republicans’ betrayal of their founding antislavery ideology: the systematic evisceration and misconstruction of the Fourteenth Amendment.

By guaranteeing equal protection before the law to all persons, the Fourteenth Amendment expanded the boundaries of American democracy considerably. The most frequently adjudicated constitutional amendment, it is the source for decisions ranging from the right to privacy, contraception, and reproductive freedom (Roe v. Wade, 1973), to the constitutionality of same-sex marriages (Obergefell v. Hodges, 2015), in our own times.

The authors of the Fourteenth Amendment in the Republican-dominated thirty-ninth Congress deliberately framed their language in broad terms so that the amendment could act as a radical democratic measure that would continue to bequeath and expand civil and political rights for all persons. Perhaps nothing illustrates the “living constitution” idea better than the amendment’s expansive, democratic language. As Representative George W. Julian of Indiana, a Radical Republican, put it, it was to create “a living democracy amid the ruins of the past.”

At times, the Fourteenth Amendment has lived up to that promise, and that is why conservative politicians and jurists have sought to contain its reach or put limits on its broad yet clear language on equal protection before the law for all persons, national citizenship, and punitive measures — loss of Congressional representation — for those states that would deny their citizens the franchise. (The latter provision has never been triggered, even when the Jim Crow South brazenly suppressed the right to vote of its black citizens and, in the southwest, citizens of Mexican descent.)

The tenuous and contested nature of black citizenship and voting was of course evident in the way southern states flouted the Fourteenth and Fifteenth amendments and got around the Thirteenth by racial terror and discriminatory legal mechanisms after the fall of Reconstruction. But with the fall and gradual unwinding of Reconstruction in the late nineteenth century, the Supreme Court and the Republican Party also sought to deliberately contain the revolutionary, democratic promise of the Fourteenth Amendment and completely change its meaning.

A conservative Supreme Court first systematically hobbled the Fourteenth Amendment in the Slaughterhouse Cases (1873) by severely limiting the reach of its equal protection clause, and then in the Civil Rights Cases (1883) by actually declaring Reconstruction legislation like the Civil Rights Act of 1875, which had presciently prohibited racial segregation in public places, unconstitutional. The GOP began its long journey from being the party of Lincoln and antislavery to the party of big business — from the party of democracy to the party of capitalism.

In a flagrant instance of judicial misinterpretation, the Supreme Court and the Republican-dominated federal government used the Fourteenth Amendment’s due process clause not to defend the rights of the formerly enslaved but those of corporations, railroads, monopolistic companies like Standard Oil and Carnegie Steel, and in our own times, of billionaires and multinational corporations. In the 1886 Santa Clara County v. Southern Pacific Railroad case, the Supreme Court accepted the argument advanced by railroad lawyer and stalwart Republican Roscoe Conklin that the equal protection clause of the Fourteenth Amendment applied to corporations.

The legal fiction of corporate personhood had been established since the early days of the American republic, when the federal courts granted corporations certain constitutional protections. On the other hand, the courts had consistently deemed labor unions illegal conspiracies, and held strikes to be criminal actions.

It was through the repeated mangling of the Fourteenth Amendment and its framers’ design that the specious judicial doctrine of corporate personhood — giving corporations all the protections and rights meant to be bestowed on individual citizens — became conventional judicial wisdom in the Gilded Age. State and local governments that attempted to curtail corporate power by either regulating or taxing them were found to be in violation of the due process clause, while southern states violated black rights with impunity and with the blessing of the United States Supreme Court, as in the infamous Plessy v. Ferguson decision (1896) that deemed racial segregation constitutional.

The post–Civil War “take-off” of industrial capitalism, accompanied by mass immigration from southern and eastern Europe, inaugurated the reign of capital and the downward spiral of wages due to the over-supply of labor. The United States overtook Britain as the world’s leading industrial power; its continental and imperial expansion, its subjugation of the Plains Indians, and its interventions and invasions in the western hemisphere and the Pacific, announced the era of formal American empire. The age of rapacious capitalism was made possible by a corrupt political and judicial regime that twisted the very meaning of the Reconstruction laws and amendments in the service of capital. Though challenged in the Progressive era, it would not be tamed until the New Deal.

Throughout this period, the courts misconstrued the Fourteenth Amendment and used its due process clause to prevent democratically elected state governments from passing laws protecting labor and curtailing the power of private corporations. Increasingly, corporations rather than citizens laid claim to constitutional protections and rights. The late twentieth century attempt by the GOP, quickened by the Reagan counterrevolution, to undo the New Deal state hearkened back to its Gilded Age roots.

In the 2012 elections, when Mitt Romney the Presidential candidate of the Republican Party claimed that corporations are people, he was evoking this reactionary tradition of judicial interpretation that had subverted the very meaning of the Fourteenth Amendment. In this reading, rather than granting rights and equality before the law to former slaves or other Americans, the amendment bestowed extraordinary privileges and immunity to capital.

This triumph of capitalism over democracy has now been enshrined in the Supreme Court’s 2010 Citizen United decision deeming unlimited corporate political spending to be protected speech under the First Amendment, and its 2014 Hobby Lobby decision granting corporations religious protections at the cost of the civil and human rights of broad swaths of the American people.

This same Supreme Court, meanwhile, has gutted the protections of the Voting Rights Act of 1965, designed to prevent the disfranchisement of African Americans in the South, permitting the growth of new ways of purging African Americans from voter rolls — including gerrymandering and political corruption — especially in the South, as demonstrated in this year’s midterm elections.

The rights of corporations have expanded while those of citizens have suffered in the hands of an increasingly conservative Supreme Court. The brief liberalism of the Earl Warren Court appears to be an exception in the history of the highest court in the land. The deceptive judicial reasoning under which American democracy must labor today began with the deliberate misinterpretation of the due process clause of the Fourteenth Amendment. If the Supreme Court wants to be respected as an independent branch of the government, it must act, as Frederick Douglass noting the regressive role of the court in the fall of Reconstruction put it, “for the protection of human rights” rather than their “destruction.”

Manisha Sinha is the Draper Chair in American history at the University of Connecticut and the author of The Slave’s Cause: A History of Abolition.

JACOBIN IS A LEADING VOICE OF THE AMERICAN LEFT, OFFERING SOCIALIST PERSPECTIVES ON POLITICS, ECONOMICS, AND CULTURE.