labor Vowing to Focus on the Working Class, López Obrador Sworn in as New President in Mexico

Lopez Obrador won Mexico's July 1 election in a landslide, and euphoric supporters are full of hope that the fiery populist will bring sweeping change, slash poverty and fight endemic corruption. 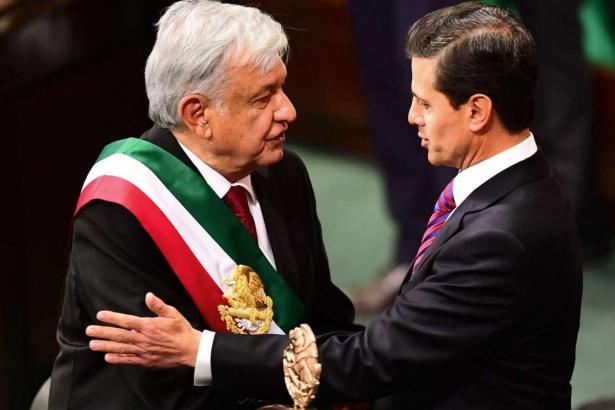 Mexico’s first left-leaning president in nearly four decades, López Obrador, 65, takes power with a firm control of the national congress and a solid hold on legislatures in many of the 32 states. That potentially makes him the most powerful Mexican president since democracy took root here 18 years ago.

Popularly known by his nickname, AMLO, López Obrador vows that his six-year term will bring about a profound “fourth transformation” of Mexico in its two centuries as an independent nation. Unlike the previous three watersheds, he says, this one will be accomplished peacefully.

“It might seem pretentious or exaggerated, but today doesn’t begin just a new administration, but rather a new political regime,” López Obrador told Congress in an 80-minute speech in which he declared the political and economic policies that have defined the past 35 years a “disaster, a calamity for the public life of the country.”

“We will govern for everyone, but we will give preference to the dispossessed,” he said. “For the good of everyone, the poor come first.”

The avowedly austere López Obrador has promised fiscal discipline as he moves to dismantle what he calls a “mafia of power” - the political and economic elites that he and many Mexicans blame for deep corruption, enduring poverty, yawning inequality and hyper violent organized crime.

“It’s going to be a very hectic sexenio,” said political analyst and democracy advocate Sergio Aguayo, referring to López Obrador’s term. “But it’s better than the paralysis, corruption and expansion of organized crime we have had.”

As he tries to fulfill the sweeping promises of change, López Obrador will need to mollify those very elites in order to maintain the private investment — largely anchored by exports to the U.S. — that in three decades have forged Mexico into an industrial power.

He'll have to do that as he contends with an often vocally hostile President Trump, who has kept the pressure on Mexico over immigration, trade and public security issues.

With its 1,200-mile border with Mexico and holding a lion's share of U.S. trade with the country, Texas has a lot riding on how it all plays out.

López Obrador already has supported the continuation of the trade pact with the U.S. and Canada that since 1994 has erased most trade and investment barriers between them. A renegotiated agreement — USMCA — was signed Friday by Trump, outgoing President Enrique Peña Nieto and Canada's Justin Trudeau at economic talks in Argentina.

While easy approval of the agreement is expected by lawmakers in Mexico and Canada, some analysts expect Trump to have a harder time winning approval of the pact next year when Democrats take control of the House of Representatives.

López Obrador also has shown flexibility in dealing with Washington over the immigration crisis that’s been driven this fall by the thousands of Central Americans arriving by caravan on the border with California to request asylum.

The two governments have been holding talks aimed at keeping the migrants in Mexico while their asylum claims work their way through the U.S. immigration bureaucracy. Marcelo Ebrard, Mexico's new foreign minister, is to hold talks Sunday in Washington with Secretary of State Mike Pompeo.

“He's willing to give things to Trump,” said political analyst Federico Estevez. “These guys understand each other perfectly.”

A jolt to financial markets

Many human rights activists and security experts criticize his plan to create a National Guard to take on organize crime - a sharp reversal of a campaign pledge to return troops to their barracks. And still others have been dismayed by his decision not to prosecute past corruption while promising to go hard after any future cases.

Still, López Obrador takes office with a 63 percent approval rating, according to a poll published Friday in Reforma, a leading Mexico City newspaper. Nearly three-fourths of those polled expressed optimism about his administration's success.

López Obrador won election in July — in his third run for the office in a dozen years — with some 53 percent of the vote in a three way race, crushing the business-friendly political parties that have long dominated Mexican politics. Many expect his victory to mark the end of the Institutional Revolutionary Party, or PRI, of Peña Nieto, which had ruled Mexico for most of the past century.

Critics fear López Obrador will attempt to return to the PRI's autocratic ways emboldened by the political dominance given him in the election. A few fret that his leftist intentions are signaled by the invitation of Venezuelan President Nicolas Maduro to the inauguration, and the laudatory comments about Fidel Castro made by top López Obrador aides.

Such fears — as well as López Obrador's cancellation of a $13 billion new Mexico City airport, which is a third complete — have been blamed for the nearly 10 percent devaluation of the peso in the past month and the 21 percent collapse of the Mexican stock market.

Investors also worry that López Obrador's suspension of auctions of oil field tracts indicate he plans to roll back or obstruct the Peña Nieto administration's privatization of Mexico's energy industries that began.

“There's certainly a fair number of folks running around here with their hair on fire, but I am a bit more circumspect," said Antonio Garza, the Bush administration's ambassador to Mexico who as a private lawyer splits his week between Mexico City and San Antonio. “Let's give the new team some time to settle in.”

Seeking to calm the financial markets, the new president's economic team has spent much of the past week assuring the public that budget discipline will be maintained and the autonomy of Mexico's central bank will be respected. López Obrador has nominated two well-regarded albeit left-leaning economists as deputy governors of the autonomous central bank.

While promising sharp increases in spending on health, scholarships and other programs, López Obrador in his speech Saturday once again vowed not to increase the deficit, to respect both the central bank’s independence and guarantee private investment.

Rather, he said, the programs will be paid for with funds gained by cleaning up government and ending the privileges of Mexico’s political and economic elite.

“From this moment a peaceful and orderly, but also deep and radical transformation begins,” López Obrador said. “Because the corruption and impunity that impedes Mexico’s rebirth will end.”

In López Obrador’s telling, Mexico’s first transformation as a modern nation was independence from Spain, the second was the mid-19th cntury reforms that broke the Catholic church's social dominance. The third was the 1910-17 Revolution. All entailed bloody and lengthy wars.

Mexico’s slow transition to democracy began in 1988, with the PRI candidate’s victory in a presidential election widely seen as stolen, and culminated with the election of conservative politician Vicente Fox 18 years ago.

The PRI returned to power in 2012 with Pena Nieto’s election. But his dismal administration — polls show him with a 28 percent approval — might have consigned the party to history.

Now López Obrador’s political movement, Morena, and it allies, have emerged to replace the PRI in political dominance.

“No government since Fox has entered office with this kind of public backing and political power,” said Estevez, whose career as a political analyst has tracked Mexico’s path to democracy. “It bodes better for López Obrador than any president we’ve seen in the democratic era.”

López Obrador will have to use that political capital to keep perpetually restless left leaning labor unions and social organizations satisfied. That may not prove easy.

“We hope he brings a better deal, but we aren’t totally convinced, “ said Oscar Galán, 41, a tomato grower leading a 30 strong contingent in the march said of López Obrador. “At least things are beginning differently. We hope this time it continues.”

Following his swearing in at the federal Chamber of Deputies, the lower house of Congress, López Obrador traveled thronged streets to the Zócalo, Mexico City's sprawling central plaza that has been the nation's political heart since the Aztec Empire.

López Obrador has held numerous protest rallies in the plaza, including one in which he declared himself the country's “legitimate” president following the 2006 election that he lost by less than a half percentage point.

He returned on Saturday in triumph.

After meeting with foreign delegations inside the National Palace, which along with the Roman Catholic cathedral dominates the plaza, he presided over a few hours of dances, music speeches before addressing the nation once again.

López Obrador has said he intends by next summer to be living in a few rooms of the palace — “with a cot and a hammock” — and presumably will govern from there. In the meantime, he'll continue living in his family home in a middle-class neighborhood in the south of the capital.

Los Pinos, the leafy, walled and heavily guarded compound across the city that has been the presidential residence and office complex since the 1930s, will be turned into a national museum. The presidential guard charged with the security of the compound an its occupants, is being disbanded.

“I have been with him since the beginning, “ said Ramon Nájera, 59, who through half a century of shining shoes in the plaza has witnessed countless political protests against a system Lopez Obrador is now promising to end. “He is going to help all the poor like us. He is going to live simply, like a common citizen.

“We have been waiting for this for a very long time,” he said.