Why Voting for Immigration Reform Is Critical for Korean Americans 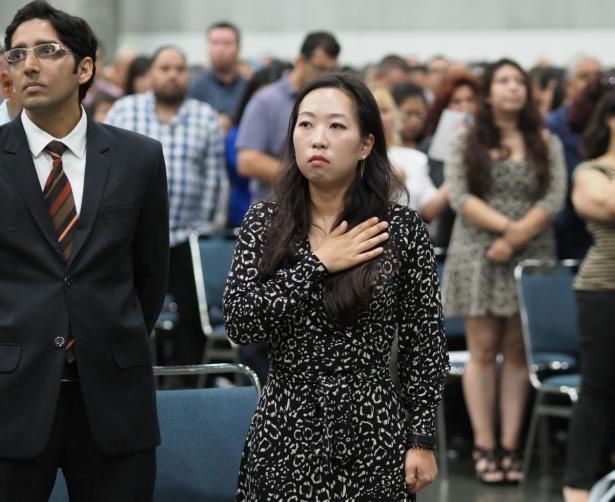 US Army veteran Yea Ji Sea, originally from South Korea, says the oath of allegiance at a naturalization ceremony to become a US citizen on August 24, 2018, along with more than 3,000 other immigrants at the Los Angeles Convention Center in Los Angeles., Robyn Beck/AFP/Getty Images

When he was 7 years old, Jin Park emigrated with his family from South Korea to the United States under the sponsorship of his mother’s employer. The family settled in Queens, New York, home to a growing Korean immigrant community. As a teenager, Park learned that he was undocumented; unbeknownst to the family, his mother’s original employer was not qualified to sponsor immigrants. He applied for and received protection under the Deferred Action for Childhood Arrivals (DACA) program and attended Harvard University, graduating in 2018.

Park’s story brings attention to the fact that Asians are the fastest-growing segment of the US undocumented population, and we must take this into account in the struggle toward comprehensive immigration reform. With midterm elections approaching, immigration should be a central issue for Koreans and Asian Americans, not simply based on exceptional cases like Park, but because legal immigrant status enables people to engage as free and equal participants in their communities.

As of July 2018, South Koreans represented the sixth-largest group of active beneficiaries of DACA and the largest Asian group, totaling 7,170. While significant, this is just over 1 percent of total recipients. The fate of DACA is often at the center of debates regarding unauthorized immigration, but the program and its recipients are just part of the larger picture, and Koreans provide an illuminating case study.

The typical story of undocumented Korean immigrants echoes that of Agnes Lee, a DACA recipient who, with her family, stayed past the expiry date of their tourist visas. “Visa overstayers,” as they are known, have become especially numerous in the last two decades. Since 2000, more than 800,000 Koreans gained entry each year to the US as “non-immigrants,” usually coming as tourists, workers or students. Due to bureaucratic and other obstacles, many who stayed did not adjust their status, which speaks less to personal failing or intentional criminality than to the unwieldy US immigration system.

South Koreans wishing to settle in the United States face years-long wait times due to immigration quotas. Their other option then, is to take the gamble of entering however they can and live in the US “out of status.”

Korean adoptees have been the subject of less common but highly publicized deportations that further underscore how badly the system is in need of repair. Adoptees whose families did not apply for their US citizenship fall into a legal limbo that has resulted in the removal of individuals with criminal records.

Such was the case of Adam Crapser, who was adopted as a toddler and eventually married and had children, but whose criminal record resulted in his deportation (and separation from his family) to Korea at age 37. Phillip Clay faced a similar predicament, and five years after his deportation to Korea, committed suicide in 2017.

Such tragedies have sent shock waves through the global community of Korean adoptees and prompted soul-searching about international adoption. They also illuminate the brokenness of a system that, on the one hand, welcomes the incorporation of foreign-born children into US homes, but also allows for their disposal and exile as adults.

Why is it that undocumented status and deportation in the Korean American community is not well understood in the public? One metric from Reuters states that only 20 percent of Asians who were eligible for DACA applied, whereas 80 percent of eligible Mexicans and Central Americans did.

Researchers are still exploring why Asian Americans have not been more visible in the movement for undocumented immigrants and why they do not seek the protections of DACA; yet existing research on Korean immigrants suggests some answers. Many of the student visa overstayers of recent decades came as an alternative to the punishing and extremely competitive system of education in South Korea and for an English language education. It remains unclear how many intend to return to Korea or move to another country. Thus, they may feel that DACA status is not worth the cost and trouble, or that admitting an undocumented status could put them at a future disadvantage in their career plans anywhere they might land. Certainly, the perception exists among this community that US Immigration and Customs Enforcement does not target undocumented Asians at the same rates as Latinx communities, and that by avoiding undocumented status, Asian American communities might remain free from apprehensions and the negative associations of lacking documentation. Some speculate that Asians do not apply for DACA out of shame, yet this might also have to do with the lack of awareness of immigrant services for multilingual Asian communities.

In Korean American communities, the presence of undocumented people is an open secret. In Korean-language community churches, advocacy occurs with members suggesting schools that enroll undocumented children, housing options and work opportunities. Many Korean-owned small businesses employ and even exploit undocumented workers, yet the business owners may feel that they are taking a personal risk to benefit other Koreans in need. Undocumented immigrants often feel safer relying on private networks that keep their entire families less visible and less vulnerable to government tracking.

Korean Americans should care about these issues because there are direct consequences for the community, as most Korean Americans engage with undocumented Koreans on a regular basis in schools, churches and businesses. Many may feel a personal responsibility to care for undocumented people who may hesitate to seek health care, public safety or other services because of their status.

Even those currently in the country legally are under threat of losing their legal status under proposed changes to the green card system regarding the “public charge” designation. Under this new Trump administration proposal, green cards can be denied and citizenship revoked for those who have relied on federal programs such as, housing assistance, food assistance and Medicaid. This includes a great proportion of elderly Korean Americans. Their children and relatives may experience a great deal of pressure to bear the economic burden of housing, feeding and health care, and could potentially see their elderly parents and relatives deported.

These examples illustrate the brokenness of the immigration system and how out-of-sync it is with the needs and circumstances of immigrants. And they raise an opportunity for all civically engaged voters — Korean American or otherwise.

Organizations like the National Korean American Service and Education Consortium have dedicated a great deal of resources to advocating on behalf of undocumented immigrants in Asian American and multiracial communities. They have supported public campaigns bringing visibility to Korean American undocumented youth and DACA recipients.

Korean American youth have been especially visible as activists in marches and demonstrations demanding action on DACA and other progressive immigration reform. In their willingness to go public, participants are bringing attention to the personal stakes and the political urgency of immigration reform. These youth are working toward a more just system for all and are asking voters to advocate for change. They should be granted legal residence and ultimately a path to citizenship.

Jung Woo Kim, a DACA recipient, worked with the Consortium to organize a bike ride of “Dream Riders” from the US-Canada border to the US-Mexico border this past August. A Dream Rider named “Alice” stated, “[A]s an undocumented Asian American, young woman, I have so much privilege to advocate for my community…. So, I decided to use my privilege for something very meaningful, because everyone deserves to live where they want to live.” Alice’s statements bring attention to her own privilege in relation to other undocumented people, and yet focus on the need for advocacy for all undocumented persons.

We encourage citizens to support undocumented people and to vote to change immigration policy so that all people can build and sustain their lives in the United States without fear. Park, who is working to create resources for all undocumented persons, explains why he continues to advocate for immigration reform: “As an undocumented immigrant, I don’t choose to be political. My existence is by definition political through means out of my control.”

Shelley Lee is an associate professor of history and comparative American studies at Oberlin College. She is co-editor of the book, A Companion to Korean American Studies (Brill 2018).

Rachael Joo is an associate professor of American studies at Middlebury College. She is co-editor of the book, A Companion to Korean American Studies (Brill 2018).