As the year comes to a close, take a look back to one of the most surprising and exciting labor uprisings of 2018. 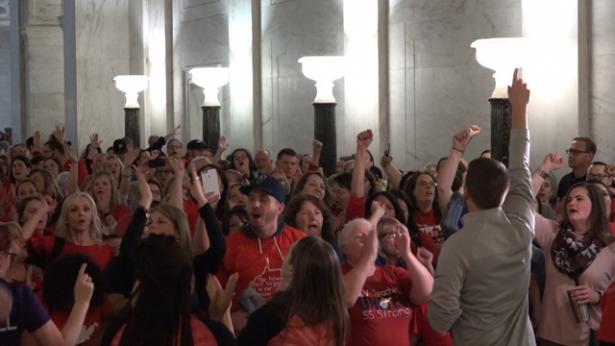 In early 2018, much of the discussion in Charleston centered around the compensation of state workers, including teachers. Governor Jim Justice had planned on giving a 1 percent increase to all state employees, but extending that raise for teachers for another five years.

For many workers, they said that wasn't enough. Many said that their PEIA health premiums and deductibles were rising, which meant that even if they did receive that raise, the net result would actually be a pay cut. Christine Campbell, the president of the West Virginia American Federation of Teachers, said that this issue is rooted in the fact public employees have hardly seen any pay raises.

"I think the issues are the lack of salary increases for years, and it's not just teachers," Campbell said. "It's service personnel, it's public employees who haven't seen a pay raise in 12, 13 years."

This allowed West Virginia to fall to the 48th-ranked state in the U.S. in terms of teacher pay, a statistic which many said would make it difficult to fill the over-700 vacant teacher positions across the state.

By February, the legislature was in a deadlock, and talks of walkouts -- or even strikes -- began swirling around the Mountain State. Previously, the last teachers' strike in West Virginia was in 1990, and many people around Charleston did not want a repeat of that. So lawmakers worked to make a deal, but it was unsuccessful.

"I still think we need to see more pay that 1 percent," said Dale Lee, the president of the West Virginia Education Association. "We have 727 vacancies across the state of West Virginia. One percent is not going to do anything to address that problem."

First signs of protest in the Northern Panhandle came on February 5, when teachers in Ohio County picketed on the streets, hoping to have their voices heard by not only those going by, but also lawmakers in Charleston.

"I'm asking that everyone makes their voices heard that we want to be competitive in the state of West Virginia to draw highly qualified teachers to the state instead of fleeing to Ohio and Pennsylvania where they pay more," said Jessica Broski Birch, a teacher at Bridge Street Middle School.

On Friday, February 16, some schools (including Wetzel and Brooke counties), closed their doors for the day, and their teachers headed to Charleston for the weekend. This time around, they were back in the classroom by Monday, February 19.

On Thursday, February 22, the statewide work stoppage officially began, which meant every school in all 55 counties would be closed. Then, tens of thousands of teachers flooded the state Capitol.

West Virginia Attorney General Patrick Morrisey called the work stoppage illegal, but many people questioned what exactly the government could do about it.

"You can dock teachers, you can dock their pay, but how are you going to replace them? As long as they stay unified, it's hard for the government to do anything short of a paper-type of enforcement," said 7News legal expert Diana Crutchfield.

Crutchfield said with so many teacher vacancies already in the state, it would make it hard for the government to take any sort of major legal action like stripping teachers of their licenses. So, the protests went on.

Although a dialogue was opened between state workers existed, many felt that it was less than cordial at times. A few days into the strike, Gov. Justice held a town hall at Wheeling Park High's Performing Arts Center. Only to some of those in attendance, it seemed less like a town hall and more like a political speech.

Many teachers were very unhappy with how that discussion went down, but also so were some parents.

"I feel like he's very condescending and rude, and I'm embarrassed to be a West Virginian right now," said Stephanie McKitrick, a parent from Ohio County.

At the town hall, however, one student stood up and seemed to have an impact on the Governor's thinking.

"If you put money in schools, you're making smart people," said Gideon Titus-Glover, a 12-year-old student from Ohio County. "If you have smart people, you can make more smart investments."

Strikers persisted for around two weeks, with tens of thousands making trips to Charleston.

"We want to be back in the classroom, but I can tell you that we are ignited. We are 55 strong, and we're going to stay that way until we get what we want," said Kerry Bates, a teacher from Lincoln County.

In the first week of March, Gov. Justice announced that he found room in the budget for a 5 percent raise for teachers, and he would form a task force to fix PEIA. Soon, teachers and students would be back in their classrooms.

"They are extremely excited, I have received many text messages you know about how much they miss the kids and they want to be in the classroom, but on the other side they need to stand firm and push for what they really believe in, it's a lesson for everybody," said Ohio County Schools Superintendent Dr. Kim Miller.

In fact, it was a lesson for everybody, and the lesson was learned across the country. Throughout the rest of the year, teachers in seven other states protested and went on strike for better benefits, including Arizona, Virginia, and Oklahoma.  In some states, protesters carried signs reading, "Don't Make Me Go All West Virginia On You." Many of those also saw better benefits after their demonstrations.

"It has been professionally inspiring and invigorating to see West Virginia start a movement that can benefit not just the students in this state, but across this nation as other educators take up the flag to fight for what they feel is fair," said Tom Romick of John Marshall High School.

Back home, teachers not only felt better off because of their pay and benefits, but inside the school's walls, they built something that wasn't there before.

"Before, we were a faculty," said Romick. "After having spent time in the elements and time together here and in Charleston and in between, we have become a much stronger family as well as a faculty."