Across America, Racist and Sexist Monuments Give Way to a New Future

Who we commemorate is not only about the past. It shapes our view of ourselves and our possible futures. That's why it matters that we have seen a series of small victories in our public spaces for a more inclusive, egalitarian vision of society. 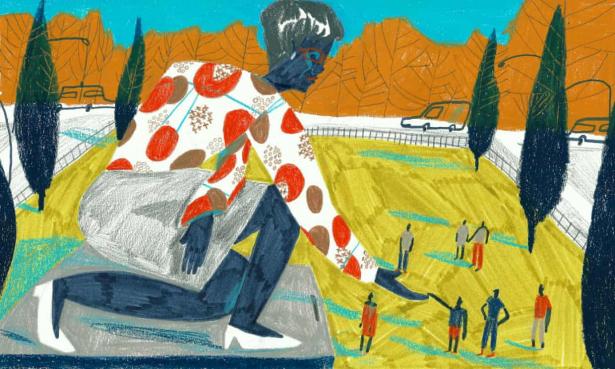 ‘You can see what’s going on in public squares and street names as a rough equivalent to #MeToo and #BlackLivesMatter’, Joey Yu

If you took your history lessons from the street names and the names of bridges and buildings, rivers and towns, you would believe men, mostly white Protestants, did nearly everything that ever mattered. But that is slowly changing: our public landscape is undergoing a deep transformation. And it reflects the shift that is under way in our society, from Alaska to Florida. It’s not enough or comprehensive or complete – but it’s a beautiful start and a powerful foundation for more change to come.

In the spring of this year, New York City removed a statue of racist gynecologist J Marion Sims from Central Park, and in the fall, the city announced that a statue to Shirley Chisolm, the first black woman to serve in Congress, will be erected in Brooklyn. San Francisco removed a much-loathed monument that showed a Native American man being dominated by a Spanish priest this fall. And a month later, the city renamed the international terminal at San Francisco international airport after the Jewish gay rights leader Harvey Milk.

Confederate statues have been coming down in many states, too, and in their place we’re seeing monuments that tell a different story. This spring, a vast monument to victims of lynching opened in Montgomery, Alabama. Atlanta renamed Confederate Avenue this fall, and this year a private campaign completed fundraising for a Chicago statue of journalist and civil rights activist Ida B Wells, born in slavery in 1862.

When Baltimore took down Confederate statues over the summer, the city renamed one area the Harriet Tubman Grove, literally switching sides in the civil war, from pro-slavery Stonewall Jackson and Robert E Lee to the most famous heroine of the Underground Railroad. Another Tubman statue is going up in Auburn, New York. Dallas took down a statue of Lee, and New Orleans did the same the year before, removing four Confederate monuments in all amid controversy and threats. I never expected to see what I did this spring: the breathtaking spectacle of the 60ft column at the center of New Orleans’s Lee Circle without the 16ft-tall Confederate leader atop it.

What does this all mean? Statues and names are not in themselves human rights or equal access or a substitute for it. But they are crucial parts of the built environment, ones that tell us who matters, who decides, who will be remembered. They furnish our imaginations. They also shape the sense of the past that we call on when we decide what future to choose and who to value and listen to in the present. When we decide who “we” is. That this is all changing signifies several things.

Who “we” is is crucial to any place, and a monument that celebrates pioneers or Indian killers – as so many across the west do – classifies Native people as outsiders and enemies. A place that honors only men defines women as nobodies. Colonizers often begin by renaming the places they’ve arrived in; victors erect statues to themselves and their version of history.

We often talk about such symbols as though their primary impact is on the people it mirrors – that the prime beneficiary of, say, a school named after Rosa Parks is black children and particularly black girls, but such representation also matters for those who are not black or female. When you look at white men enraged and indignant at having to share the stage with others, you see the consequences of their formation in a world centered on white men. It’s bad for them too. You can see what’s going on in public squares and street names as a rough equivalent to #MeToo and #BlackLivesMatter and idle no more: a shift in whose voice is heard and whose life valued.

The changing nation is already evident in changing demographics and shifts in the distribution of power. The current Democratic caucus in Congress is 39% non-white – 1% more than the general population – though the 51% of the population that is female is still grossly underrepresented there. The election of two Native women to Congress last month is a reminder how appalling it is that they are the first. But they will not be the last. And it was clear that both Andrew Gillum in Florida and Stacey Abrams in Georgia would have won their elections without significant voter suppression. The Republican party, which willingly jettisoned non-white people with their politics of white grievance and overt racism, is now hemorrhaging even white women: “We’ve got to address the suburban women problem, because it’s real,” said a worried Lindsey Graham in the wake of November’s election.

New voices are rising up, and ideas that emerged from the edges are taking their place at the center. Twenty-one young people are suing the federal government over climate change in a suit that should go forward next year, and a 15-year-old Swedish girl was one of the most compelling voices at the climate summit in Poland. Alexandria Ocasio-Cortez’s victories were among this year’s beautiful surprises, and she brings with her momentum for a Green New Deal that is, among other things, the capacity to imagine and embrace profound change (and, a poll shows, is embraced by 80% of the population).

Though the far right matters, young people as a whole have more progressive positions on race and sexual orientation, and this summer a Gallup Pollsuggested that Americans aged 18-29 prefer socialism to capitalism and the shift “represents a 12-point decline in young adults’ positive views of capitalism in just the past two years”.

That this was a white Protestant nation was a given when I was growing up. But both the whiteness and the religiosity are in decline. The New York Times reported in 2012: “For the first time since researchers began tracking the religious identity of Americans, fewer than half said they were Protestants, a steep decline from 40 years ago when Protestant churches claimed the loyalty of more than two-thirds of the population.” This month a new report in Newsweek made the profundity of the shift clear: “The median age of white evangelicals is 55. Only 10% of Americans under 30 identify as white evangelicals. The exodus of youth is so swift that demographers now predict that evangelicals will likely cease being a major political force in presidential elections by 2024.”

You can see these changes in who and what is commemorated in public places a series of small victories for a more inclusive, egalitarian vision of society. And it is worth celebrating that these victories are happening even in the shadow of the Trump regime – which in this light is only a backlash against the inevitability of the end of this era of white male Protestant dominance. Our electoral system is full of built-in advantages for them. The disproportionate clout of small rural states, the electoral college, gerrymandering, voter suppression keep this new America from expressing itself adequately electorally, though November’s blue wave swept over many of these obstacles – but these local changes announce who we are and shall become is not who we were.

You can see that it matters in the battles fought over these statues. A number of southern states have passed laws protecting them. And of course the white supremacist rally in Charlottesville last year had as one of its foci the planned removal of a Confederate statue. “You will not replace us,” the mob howled, pretending that equality pushed them down rather than raised others up. But we will replace their statues, and they can come along or, as the Maga slogan seems to promise, try to make us go backward. We can see the conflicts over representation as an unfinished civil war battle and perhaps a long-overdue defeat for the Confederacy.

It wasn’t until my collaborators and I made a map of the New York City subway system with every stop renamed after a significant New York womanfor our 2016 atlas of the city that I realized how profound the impact of our unequal imaginative landscape is. That New York City has only five statues of historic women I knew. But the impact of naming nearly everything after men – a few Native men from Sequoia to Seattle, but mostly white ones – in most parts of the country on most scales from campus buildings to cities and even Washington state I assessed for the first time with that project.

Making the map, I realized how differently I might have experienced my self, my rights, and possibilities, had I grown up in such a landscape, and how the same applies to anyone who’s not white, doubly to those who are neither white nor male.

Seeing this extraordinary transformation of the public landscape is seeing that the very ground we stand on, the streets we travel on and the people we honor are changing, and despite the regressive raging in the White House, this process is widespread and shows no sign of stopping.

Invest in independent journalism by supporting The Guardian.