Diplomatic officials may have been targeted with an unknown weapon in Havana. But a recording of one “sonic attack” actually is the singing of a very loud cricket, a new analysis concludes. 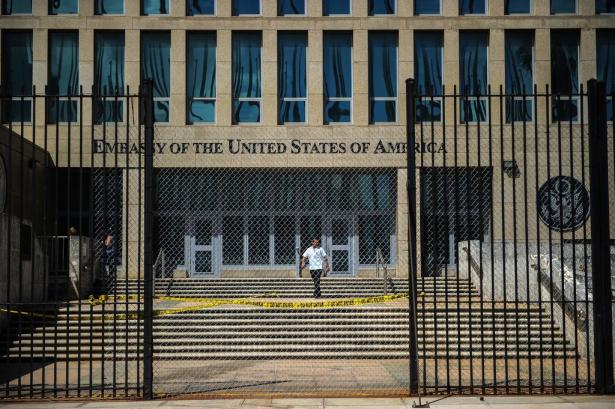 Scientists say a recording of disturbing sounds made by American diplomats in Cuba actually may be of a very loud cricket species., Yamil Lage/Agence France-Presse — Getty Images

In November 2016, American diplomats in Cuba complained of persistent, high-pitched sounds followed by a range of symptoms, including headaches, nausea and hearing loss.

Exams of nearly two dozen of them eventually revealed signs of concussions or other brain injuries, and speculation about the cause turned to weapons that blast sound or microwaves. Amid an international uproar, a recording of the sinister droning was widely circulated in the news media.

On Friday, two scientists presented evidence that those sounds were not so mysterious after all. They were made by crickets, the researchers concluded.

That’s not to say that the diplomats weren’t attacked, the scientists added — only that the recording is not of a sonic weapon, as had been suggested.

Mr. Stubbs presented the results of the analysis at the annual meeting of the Society of Integrative and Comparative Biology. He and Dr. Montealegre-Z also posted an early version of their study online. They plan to submit the paper to a scientific journal in the next few days.

When Mr. Stubbs first heard the recording, he was reminded of insects he came across while doing field work in the Caribbean. When he and Dr. Montealegre-Z downloaded the sound file, they found that its acoustic patterns — such as the rate of pulses and the strongest frequencies — were very similar to the songs of certain kinds of insects.

Male singing insects produce regular patterns during courtship. Females are attracted to certain males based on their songs, which has led to the evolution of different songs in different species.

If the sounds heard by the diplomats were made by insects, Mr. Stubbs and Dr. Montealegre-Z reasoned, it might be possible to pinpoint the particular species.

To search for a match, the researchers analyzed field recordings of North American insects stored in an online database at the University of Florida. They found a striking resemblance to one species in particular: the Indies short-tailed cricket.

Yet the cricket’s song differs from the Cuban recording in one important respect. The noises heard by the diplomats were erratic, while the insects make high-pitched, rapid-fire pulses.

Mr. Stubbs suspected that this mismatch might be an artifact of the recording itself. Diplomats made their recordings inside houses, while biologists have recorded the crickets in the wild.

So Mr. Stubbs played the cricket recording in a house. As the calls bounced off the walls, they echoed in a pattern similar to the irregular pulses heard on the Cuban recording.

The song of the Indies short-tailed cricket “matches, in nuanced detail, the A.P. recording in duration, pulse repetition rate, power spectrum, pulse rate stability, and oscillations per pulse,” the scientists wrote in their analysis.

Experts on cricket songs said the analysis was well done. “It all seems to make sense,” said Gerald Pollack of McGill University, who studies acoustic communication among insects. “It's a pretty well supported hypothesis.”

When the American diplomats first complained of the strange noises in Cuba, they dismissed the possibility that insects were responsible. But short-tailed crickets are exceptional: They have long been known to make a tremendous racket.

“The song of the males of this cricket, here, is a continuous ringing z-z-z-z-z-z- of tremendous volume and penetration which practically fills a room with veritable din,” an entomologist in the Dominican Republic reported in 1957.

Mr. Stubbs recorded short-tailed crickets while in Costa Rica, and he found their songs overpowering. “They’re incredibly loud,” he said. “You can hear them from inside a diesel truck going forty miles an hour on the highway.”

Mr. Stubbs said that his conclusion does not rule out an attack on American diplomats. But the sounds linked to the initial complaints may have been a red herring.

“It’s entirely possible that they got sick with some other completely unrelated thing that was not a sonic attack, or that they were targeted in some other way,” he said.

Dr. Douglas Smith, who led the medical examination of the American diplomats, questioned how much a single recording could reveal about the experience. Some patients didn’t report hearing anything unusual, he noted, while others heard a range of sounds.

“It could be like a low-tone motor, or metal scraping, or like driving in a car with the back window open,” said Dr. Smith, director of the Center for Brain Injury and Repair at the University of Pennsylvania.

Dr. Smith wouldn’t rule out the possibility that some diplomats might have heard crickets, but said that had no bearing on the real damage they’ve suffered.

“These patients have gone through a lot,” he added. “I would like to know what the sounds are, but for us the more important thing is really what’s going on in the patients’ brains and what we can do about it.”

A version of this article appears in print on Jan. 5, 2019, on Page A6 of the New York edition with the headline: Scientists Say U.S. Diplomats in Cuba Heard Lovelorn Crickets. Order Reprints | Today’s Paper | Subscribe