Scott Warren offered food, water, and clothing to migrants on a deadly stretch of the U.S.-Mexico border. Now he’s facing twenty years in prison. Humanitarian groups fear the situation will only get worse.

January 16, 2019 James Goodman The Progressive
Printer friendly
The Scott Warren Case is Part of a Crackdown on Aid to Migrants Published January 16, 2019 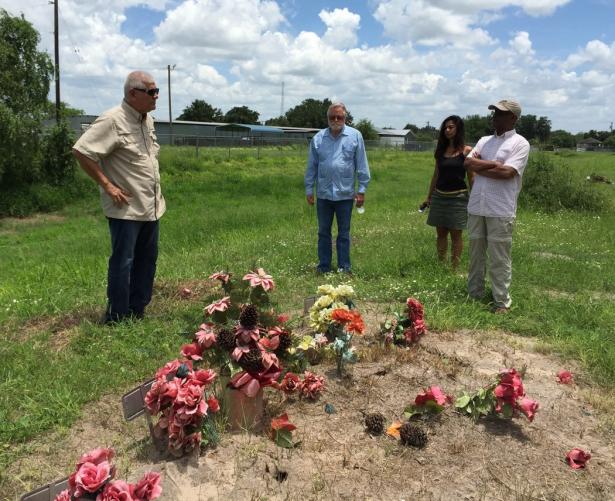 Members of the South Texas Human Rights Center at a ceremony honoring those who have died attempting to cross the border, Sacred Heart Burial Park, Falfurrias, Texas.,

A year ago, two undocumented Central American immigrants who crossed into Arizona from Mexico found themselves in especially dire straits. The two immigrants, Kristen Perez-Villanueva and Jose Arnaldo Sacaria-Goday, had dropped their backpacks containing food and water while being chased by U.S. Border Patrol agents.

Their journey into Pima County, on the Arizona side of the border, was high risk. More than 2,100 bodies of undocumented immigrants, many of them never identified, have been found there since 2001, according to the Pima County Medical Examiner’s Office. But like many other immigrants fleeing violence and desperation, they were willing to chance the brutal desert terrain.

After walking about forty miles through the southern Arizona desert, the two immigrants finally reached the small town of Ajo, where they were taken to “The Barn.” This is a building in town used by No More Deaths, Ajo Samaritans, and several other humanitarian aid organizations that provide border crossers with water and food.

The Barn, however, is where their journey came to an end. Border Patrol agents arrested Perez-Villanueva and Sacaria-Goday, along with No More Deaths activist Scott Warren, who is accused of providing them with food, water, bedding, and clothes over three days. Charged with harboring undocumented immigrants, as well as conspiracy to transport and harbor them, Warren faces a maximum of twenty years in prison.

The Trump Administration, with an ever-increasing show of force at the border, continues to force migrants to take more dangerous routes. It is also extending its crackdown to those providing humanitarian aid.

Hiram Soto, spokesman for Southern Border Communities Coalition, an umbrella organization of about sixty-five groups that seeks to ensure border enforcement respects human rights and prevents loss of life, lamented this turn of events: “We should be encouraging people to help those in need—not going after them with vindictive action.”

The surveillance and arrest of Warren came within hours of No More Deaths issuing a report accusing U.S. Border Patrol agents of “regular and widespread destruction of water supplies with little or no consequence.” The report, emailed to the Border Patrol that morning, includes a video showing agents destroying water jugs.

Whether throwing the book at Warren was in retaliation for the report should come out at his trial. It is scheduled to begin in the U.S. District Court in Tucson on January 14 but is expected to be delayed, partly because Warren’s lawyers want fuller disclosure of Border Patrol emails leading up to his arrest. (The U.S. attorney’s office has more Border Patrol emails than it thinks are relevant to the case and so far Warren’s lawyers have been limited in what they can review.)

Warren is one of nine volunteers with No More Deaths facing misdemeanor charges of trespassing and abandoning “property”—specifically, food and water left for border crossers—and for operating a vehicle on the Cabeza Prieta National Wildlife Refuge.

The trial for four of these defendants—not Warren—is scheduled for January 15.

While the relationship between the Border Patrol and humanitarian groups has long been uneasy, everyone recognizes that providing water to border crossers can save lives. But the Warren felony prosecution and pending misdemeanor cases suggest the agency is taking a more aggressive position against those who provide support for desperate immigrants.

A May 25 letter from a coalition of U.N. officials identifies Warren’s case as a threat to civil liberties. “Serious concern is expressed over the arrest and charges against Mr. Scott Warren and the charges against eight other volunteers for reasons directly linked to the provision of humanitarian aid to migrants,” the letter states.

“We are deeply concerned with the ‘chilling effect’ of the arrests and charges on legitimate human rights work, aimed to save lives,” the letter concludes.

Warren, thirty-six, has a Ph.D. in geography and is a faculty associate at Arizona State University. Since 2014, he has been a volunteer with No More Deaths, which seeks “to end death and suffering on the Mexico-U.S. border.”

Warren describes his commitment to helping undocumented immigrants as a matter of religious conviction. At a pretrial hearing, he told of having discovered the bodies of sixteen people who had died in the desert.

“Based on my spiritual beliefs, I am compelled to act. I am driven to act. I have to act when someone is in need,” he said at the hearing.

In his synopsis of the case, U.S. Magistrate Judge Bernardo Velasco, who has handled pretrial proceedings in similar cases, described the “prosecution climate” in immigration as growing “very aggressive” under the Trump Administration.

“The previously existing period of tolerance seems to have ended,” Velasco wrote. “The Government is now prosecuting No More Deaths members for all infractions.”

A decade ago, No More Deaths activists in Tucson faced prosecution for littering because they distributed gallon-sized plastic bottles of water on trails in the Buenos Aires National Wildlife Refuge. But the Ninth Circuit Court of Appeals, in a 2010 decision overturning a littering conviction in these cases, said it “is ambiguous as to whether purified water in a sealed bottle intended for human consumption meets the definition of ‘garbage.’ ”

The Warren prosecution comes out of Trump’s “zero tolerance” policy for anything that might help an immigrant.

“This is pretty outrageous because they are clearly targeting [Warren] to make an example,” says Catherine Tactaquin, executive director of the National Network for Immigrant and Refugee Rights, based in Oakland.

The South Texas Human Rights Center, an advocacy group located near the southern tip of Texas that works to prevent migrant deaths, maintains about 160 water stations in the border region. It also runs a hotline, which receives about sixty calls a month, says Eduardo Canales, director of the group and also board chairman of the National Network for Immigrant and Refugee Rights.

Family members in Mexico searching for missing loved ones who tried to cross the border account for the largest number of calls, followed by calls from Central America, he says.

In about half of the cases, the missing person is found in Homeland Security detention. The other half remain missing, says Canales.

With his stepped-up militarization of the border, Trump has put the United States on a warpath. “It’s time to end the U.S.-Mexico War,” says Canales.

As he faces trial, Warren is seeking protection under the Religious Freedom Restoration Act, which prohibits the government from interfering with religious practices or beliefs unless there is a compelling government interest. And when government does intervene, it must be in the least restrictive way.

The Reverend John Fife, who was a founder of the Sanctuary Movement in the early 1980s, helped to established No More Deaths in 2004, after there was a realization that the border buildup was having deadly consequences. The group has been a ministry of the Unitarian Universalist Church of Tucson since 2008.

“We put together folks from the Sanctuary Movement to confront this new reality. Migrants were dying in this section of the border,” Fife says, adding that Warren did nothing more than what other members of No More Deaths have done all along.

“Trump’s argument for using more walls and more enforcement in pursuit of the failed border enforcement policy is simply an escalation of the United States‘s violations of international law and human rights.”

James Goodman is a freelance writer based in Rochester, New York.