FBI Agents Arrested Roger Stone for Free. I Would Have, Too.

He's given nothing to American politics but poison 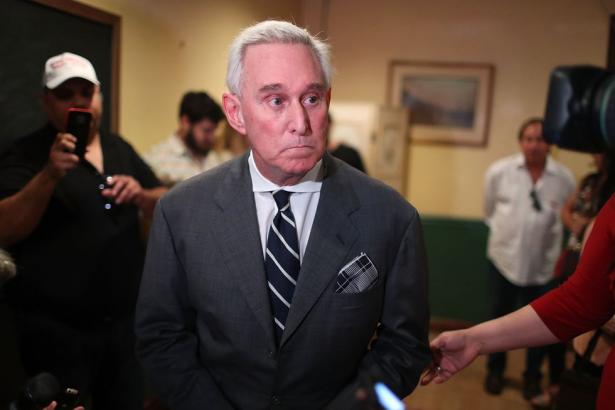 Sooner or later, it was going to come to this. Angry at missing yet another paycheck because the American political system is fcked from hell to breakfast, unpaid federal workers take to the streets, marauding through Florida in the middle of the night, disturbing ordinary Americans in their beds and causing general mayhem live on CNN. TheWashington Post explains.

Roger J. Stone Jr., a longtime informal adviser to President Trump, was arrested by the FBI on Friday on charges he lied and tried to tamper with a witness to hide the details of his efforts to learn about releases of Democrats’ hacked emails during the 2016 campaign. Stone was charged with seven counts, including one count of obstruction of an official proceeding, five counts of false statements and one count of witness tampering.

With Stone’s indictment, Mueller has struck deep inside Trump’s inner circle, charging a long-standing friend of the president. The court filing charges Stone sought to gather information about hacked emails at the direction of a senior Trump campaign official. The indictment centers on Stone’s efforts to find out when potentially damaging releases of internal Hillary Clinton campaign emails would be released by Julian Assange, the leader of the antisecrecy group WikiLeaks. U.S. officials say Russian intelligence agents hacked Democrats and their email accounts and then shared them with WikiLeaks, which publicized them during the final months of the 2016 election.

Which raises the profound philosophical question: would you arrest Roger Stone for free?

Before answering, here is some light reading for your consideration.

First, courtesy of USA Today, here is the actual indictment as presented by Robert Mueller's team.

And here, thanks to the folks at MediaMatters, is a lengthy account of Roger Stone's career as a general pustulation on the body politic.

So, again, I ask, would you bust this guy without getting paid for it? To tell you the truth, after watching Roger Stone operate for five decades in which he contributed nothing to American politics except the rankest poison, I might have been glad to pay someone for the privilege.

The consequences of the early morning raid that hauled Stone off to the sneezer are both obvious and profound. First, it is the final bit of evidence that the 2016 Trump campaign was a thoroughgoing criminal enterprise. Second, there are these passages in the indictment that are getting all the attention.

On or about October 7, 2016, Organization 1 released the first set of emails stolen from the Clinton Campaign chairman. Shortly after Organization 1’s release, an associate of the highranking Trump Campaign official sent a text message to STONE that read “well done.” In subsequent conversations with senior Trump Campaign officials, STONE claimed credit for having correctly predicted the October 7, 2016 release.

After the July 22, 2016 release of stolen DNC emails, a senior Trump campaign official was directed to contact Stone about any additional releases and what other damaging information Organization 1 had regarding the Clinton campaign. Stone thereafter told the Trump campaign about potential future releases of damaging material by Organization 1.

According to several published reports, the "senior Trump campaign official" mentioned here was Steve Bannon, which makes the phrase "was directed to contact Stone" even more intriguing. At that point in the campaign, the universe of people who could "direct" Bannon to do anything was a tiny one, and several of them had the same last name.

Third, it looks like acting Attorney General Matt Whitaker stepped aside here and let Stone take it in the chops. That can't make the White House very comfortable.

Fourth, it is possible, though unlikely, that Stone has been cast as the Gordon Liddy figure in this whole drama, and that the strategy from here on out will be that he, and Bannon, and Rick Gates dreamed up this whole scheme and that the president* was as shocked as everyone else when he learned about it. I don't think this can work, but it's something they might try. In fact, they're already trying this.

And, finally, as an ancillary event, Paul Manafort was due in court Friday to see how long he will have to stay in prison for lyin' when he was supposed to be truthin'. I hope security around the courthouse is tight. Rampaging unpaid federal employees are everywhere.

Charles P. Pierce has been a working journalist since 1976. He is the author of four books, most recently 'Idiot America.' He lives near Boston with his wife but no longer his three children. Twitter.