Blackface Is Just One Part of the Problem

The furor over Virginia Gov. Ralph Northam’s yearbook photo has America once again asking the wrong questions about racism. 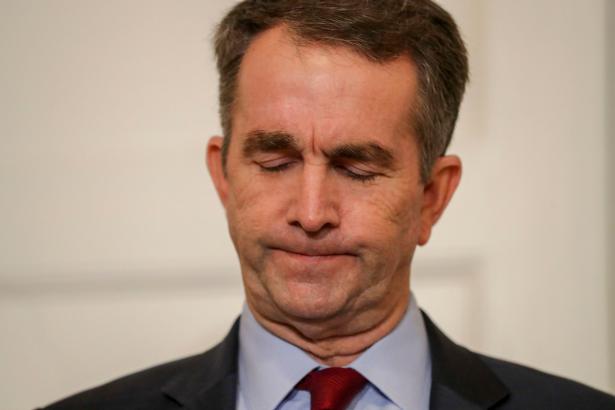 Virginia Gov. Ralph Northam looks down at his prepared statement as he speaks to the media about a racist photo that appeared in his 1984 medical school yearbook, at the Executive Mansion in Richmond, Virginia, USA on February 2nd 2019. , DAN CURRIER/EPA-EFE/REX/Shutters

Not long after Virginia Gov. Ralph Northam immolated what was left of his political career, I got the Reverend Dr. William Barber on the phone. The fiery civil rights leader, known for founding the Moral Mondays movement and for reviving Rev. Dr. Martin Luther King, Jr.’s Poor People’s Campaign, did not focus on Northam’s current troubles — including the governor’s reversal that he was dressed as either a Sambo or Klansman in that 1984 medical school yearbook photo. Nor did Barber zero in on Northam’s derogatory “Coonman” nickname. Barber and I did not discuss the governor’s admitted use of blackface during a Michael Jackson dance contest in San Antonio, either. (Speaking Saturday morning, the governor claimed to understand that putting shoe polish on his face to imitate the King of Pop was racially insensitive. His wife, Pamela, had to more or less restrain him from moonwalking in front of the press.) From the start of our dialogue, Barber shared my desire to reshape the national discussion about Northam and racism into something more constructive and comprehensive.

The photo in question first appeared on a conservative site associated with white nationalism, and went viral after The Virginian-Pilot picked up the story on Friday afternoon. The image is precisely what modern right-wing ideology wants us to believe racism looks like. Republicanism bolsters policy that sustains systemic racism; it only makes sense that it thrives on the overly strict notion that X person if and only if he or she says “nigger” or shows up in a Klan hood. Sometimes not even then.

“America keeps trying to have conversations and keeps attempting to deal with racism when quote-unquote cultural things erupt,” Barber says. “Or when something like Charleston happens, as gross and ugly and murderous as it is, and then we have an eruption, and then it goes away. And part of the problem is in that kind of reaction itself, because racism ultimately is about systems and structures.”

It’s too easy to distract ourselves with the varying ways that Northam is embarrassing himself and his office. Saturday’s reversal was an insult to the intelligence of every black voter who helped elevate Northam to victory in 2017, mere months after the murderous white-supremacist chaos in Charlottesville.

I want Northam to resign not merely because he can no longer credibly govern the state. Every moment he stays in office advances a misconception that racism is merely about imagery. “Even if the governor resigns [because] of this picture from ’84, that doesn’t heal racism,” Barber says. “The courts are finding, over and over again, that these voter suppression tactics — from gerrymandering to photo ID to blocking same-day registration — are full of racism. They’re ruling that! They ruled that the [North Carolina] legislature had targeted blacks. The architect of that legislation never said the N-word.”

What this Northam controversy should point us to is the episodic lens through which we view racism in this country — a series of flash-points sparked by a horrifying image, a spoken slur or a bad tweet. These events trigger imprecise conversations, like whether Tom Brokaw truly has racism in his heart after saying, “Hispanics should work harder at assimilation.” Only if we’re lucky does a conversation about blackface in a medical school yearbook expand to touch upon disproportionate rates of black maternal and infant mortality, and why doctors trained in dangerous racial stereotypes may very well employ others when they have African-Americans in their care.

Barber feels that what we keep missing is that racist laws and policies come before the ignorance on display in that photo. “Or even economics that say the means justify the ends,” he adds. “Or heretical ontology that says God intended for people to be separated. You know, the laws, the desire to legally engage in racism against people came first. And then all the ignorance, the blackface, the Sambos, came as a result of the laws.”

As long as racial slights are limited to the strictly observable, two central problems emerge: people can be told not to believe what they see, and we cannot effectively target what disproportionately silences, disenfranchises, miseducates, segregates and even kills people who are not white and therefore most insulated from America’s design flaws.

“In Virginia, there [will be] a pipeline going through a black community,” Barber says. “That’s racism. I want to know where he stands on that!”

The reverend is referencing the new $7.5 billion Atlantic Coast Pipeline that is expected to be completed by 2021. It will carry fracked natural gas 600 miles from West Virginia to North Carolina, passing through Northam’s state. Dominion Energy, literally Virginia’s most powerful utility and the state’s most generous corporate political donor, is behind the project. If Dominion fights its way through several court cases, part of the planned pipeline will go through the historic African-American community of Union Hill in rural Buckingham County. Many local residents can trace their lineages directly to enslaved and freedmen ancestors who settled there after the Civil War.

Dominion plans to build a high-powered compressor station mere yards from homes, which the Chesapeake Climate Action Network complains “would run 24 hours a day and emit sounds comparable to a jet engine.” Worse than being a nuisance, the CCAN argues that the station would pollute the community’s air with all manner of gases and particulates that could lead to ailments as serious as cancer. In perhaps a fitting bit of historical irony, the station’s planned site is on the grounds of a former slave plantation.

Opponents of the pipeline have decried Dominion’s plans as environmental racism, but the state’s Air Pollution Control Board voted unanimously in January to approve a permit for the compressor station. Two months ago, Northam came under heavy criticism from environmental groups for removing two members of that board who had raised concerns about the energy company’s plans. The governor claimed at the time that he replaced those members, Samuel Bleicher and Rebecca Rubin, because their terms had expired in June — but what sense did it make for him to do it suddenly in November, right as they were asking questions? (Northam’s office did not respond to Rolling Stone’s request for comment on the issue.)

Northam’s two replacement picks didn’t vote in January on the compressor station permit, and a third member abstained due to a conflict of interest. Had they all voted against it, that wouldn’t have been enough. But imagine if Northam had stood with his Union Hill constituents against Dominion, throwing the weight of his office behind their protest. Could he have made a difference?

Instead, he sided with Dominion, apparently in violation of a campaign promise to require individual stream permits for pipeline companies. His administration emphasized that the compressor station won’t damage the health of residents. The AP reported that Dominion has also offered $5 million to help “improve” Union Hill. But Northam not only disempowered the board that ultimately made the call on the very thing they sought to block, but took pains to show his indifference. “As far as the pipeline,” Northam said in a recent radio interview, “there’s not a lot of middle road on that issue,” adding, “I’ve tried to be as fair as I can.”

That sentence echoes the foreboding threat that Dr. King warned us about in his letter from that Birmingham jail cell. The civil rights icon cautioned us against the white moderate “who is more devoted to ‘order’ than to justice” and “who prefers a negative peace which is the absence of tension to a positive peace.” Northam’s desire for fairness, as he sees it, may doom a historic black community to being poisoned for fossil fuel riches that largely won’t benefit them. Oh, what a sight it would be to see wall-to-wall coverage of the damage wrought by white moderates who told black people that they were on our side!

By his own logic, Northam was astonishingly racist or stupefyingly incompetent. However, I’d argue that his actions in the Union Hill drama are also disqualifying, for it suggests a comfort with the system as is that should be unsuitable for every African-American not just in that community, but throughout the state and country. This is why he as to go. Northam, so desperate to hold onto his power that he would rather sit impotent in his seat than give it up, seems all too willing to wait for the “more convenient season,” as Dr. King put it in his letter, when black folks can finally enjoy full equality.

Democrats should keep a foot on his neck until he quits. Then they should all look in the mirror for any signs of similar moderation, and get that checked out.