labor I Was a Student Worker Fighting for a $15 Wage. Now, I’m Facing a Criminal Record.

Recent graduates face enough difficulty trying to find employment and pay off their large student debt. Imagine doing it with a criminal record and trying to find the money to pay for legal fees. 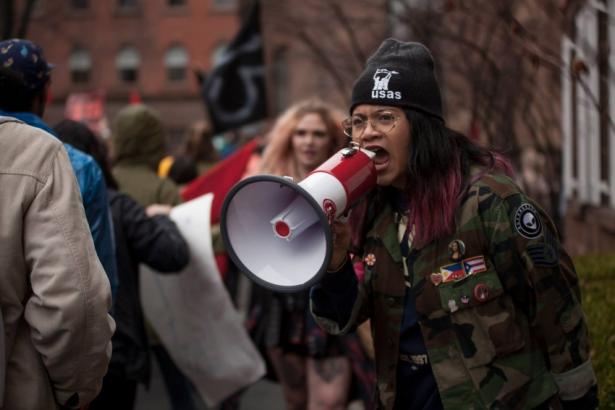 Demanding a living wage should not be a criminal offense. ,

On Monday, February 4, I will have my day in court in New Brunswick, New Jersey. That’s not where I’d like to be spending my morning. I’d rather be at my office in DC working on getting back-pay for federal contract workers. But on Monday, 11 of my former classmates and I will march into the courtroom with our lawyer and defend ourselves against the charges brought upon us by our alma mater—Rutgers University.

On December 12, 2017, dozens of students, workers, and activists of United Students Against Sweatshops (USAS) staged a peaceful protest asking the Board of Trustees to give campus workers like me $15 an hour and a union contract. I was a dining service worker and, along with other colleagues, had been asking for a raise for two years. Books, housing and transportation all add up, and it’s almost impossible to live on the poverty wages that Rutgers pays its dining workers. The administration agreed to raise the minimum wage from $8.44 to $11 an hour in 2018, but that’s still not a living wage. The Economic Policy Institute calculates that a single person living in Middlesex County, New Jersey needs to make over $42,000 to afford to live there. There’s no way that students like me working part-time in the dining hall, while attending class full-time, could generate that kind of income without taking out more student loans.

I wasn’t nervous the day we interrupted the board meeting, because I knew I was doing the right thing for myself and hundreds of workers like me. However, the administration did not see it that way. Twelve of us were arrested that day and each given three “disorderly persons” charges that could lead to six months in jail or an overwhelming amount of fines. Though we hoped that these charges would be dropped, the police and the administration have proved unwilling to cooperate and insist on penalizing us for exercising our voices.

While I was fortunate to get hired after graduation at DC Jobs with Justice, a unionized workplace that treats its workers fairly, I am worried about the future. Being a non-binary mixed person of color, I already struggle to maneuver systems that were never created to protect or support me. I am fearful that these charges will hang over my head and damage my future career path. Recent graduates face enough difficulty trying to find employment and pay off their large student debt. Imagine doing it with a criminal record and trying to find the money to pay for legal fees.

Thanks to years of dedicated activism, the New Jersey legislature recently passed a bill to increase the state’s minimum wage to $15 an hour by 2024, which will force Rutgers to pay at least that amount. That will help campus workers keep up with the cost of living, but it’s still not enough to keep up with the rising cost of education.

I hope that the judge sees that my co-defendants and I were simply trying to secure a better standard of living for ourselves and be able to fully enjoy the benefits of our education, without struggling to make ends meet. If Rutgers truly cared about the student life at their university, they would treat us fairly, not throw the book at us.

Ina Padua is an organizer at DC Jobs with Justice and a member of the Nonprofit Professional Employees Union. They are a proud USAS alum.