A New Political Party in Poland Wants to 'Re-Christianize' Europe

Father Tadeusz Rydzyk, the ultra-rightist Catholic priest and entrepreneur, is seen as the driving force behind the new Polish party intent on rebuilding “Christian thought in Europe” and winning seats in the European parliament elections in May. 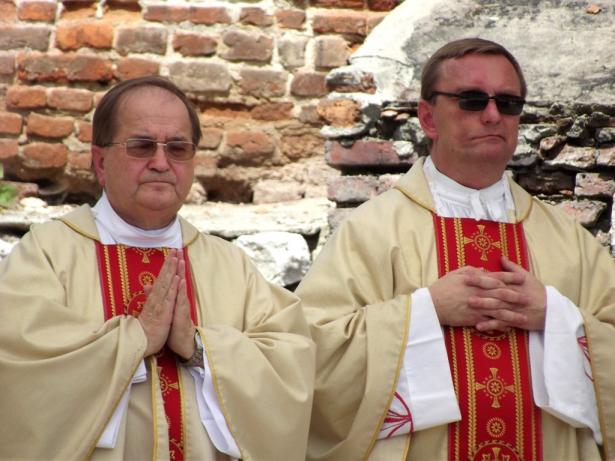 Tadeusz Rydzyk (left) praying at a march in support of his Catholic media empire in Krakow, Poland., Piotr Drabik/Flickr.

Father Tadeusz Rydzyk, a controversial Catholic priest and éminence grise of the Polish political scene, is seen as the driving force behind a new party aiming to put forward candidates for the upcoming European Parliament elections.

The “Ruch Prawdziwa Europa – Europa Christi” (‘True Europe Movement’, or RPE), says it aims to “rebuild Christian thought” in Europe. Journalists have dubbed it “Rydzyk’s party” – though the priest denies any association with it.

The party was launched on 14 February by Mirosław Piotrowski – a current member of parliament (MP), long-term ally of Rydzyk and regular contributor to Radio Maryja, part of the entrepreneurial priest’s Catholic-nationalist media empire.

Rydzyk’s media outlets are known for promoting ultra-conservative politicians and commentators that have mocked women over sexual abuse allegations, denied that marital rape exists, and campaigned for a total ban on abortion.

The priest is also known for his close relations with the ruling Law and Justice (PiS) party – though the RPE's launch comes amid signs these have soured.

If the new party succeeds in reaching enough of the country’s conservative electorate, it could push Polish politics further to the right. Piotrowski said it “could unite the right-wing initiatives disappointed with PiS party’s policies”.

Marcin Kierwiński, an MP with the opposition Platforma Obywatelska (Civic Platform), described the RPE as set to “compete with PiS” and that “its establishment might herald a break of the right-wing camp” in Poland.

Agata Chyżewska-Pawlikowska, a Polish Women’s Strike activist and an organizer of a recent protest outside Radio Maryja’s headquarters, said “Rydzyk has been involved in the political life in Poland for a long time”.

“This for us is unacceptable”, said the activist. “As a representative of the Church, he should commit himself to the matters of the faith instead”.

She described the new RPE party as “interested chiefly in winning seats in the European Parliament elections” in late May and warned that, if it succeeds, it could “torpedo any matters related to protection of women's rights, for instance domestic violence or the right to abortion”.

Rydzyk is a towering figure in Poland with well-known political connections and an extensive network of enterprises and organizations that have benefited from millions of pounds worth of grants from state institutions run by PiS allies.

His media empire includes Radio Maryja, the TV Trwam station and the Nasz Dziennik daily newspaper. These platforms, popular among conservative voters, regularly promote right-wing politicians and have been accused of amplifying homophobic and sexist perspectives.

During a December broadcast on Radio Maryja, a guest (another priest) said that “under the conjugal duty, a husband has a right to demand sexual intercourse” and “the wife cannot consider him an aggressor or a potential rapist”.

In October, Stanisław Michalkiewicz, a regular commentator on Radio Maryja and TV Trwam, posted a video on his YouTube channel mocking a woman who’d been abducted as a child and raped over several months by a priest.

Referring to a landmark court ruling that granted the woman monetary compensation, he said “to get a million złoty for sexual harassment, just because someone put their hand up your skirt, who wouldn’t want that?”

Last year, after mass women’s protests forced the PiS to shelve a proposal to further restrict abortion rights, Rydzyk’s media also ramped up pressure on politicians with repeated appeals to “not condemn children to death”.

In January, women's rights activists protested “hate speech emanating from” Radio Maryja – and “the way it gets involved in political and social matters”.

Their demonstration prompted a complaint from PiS politicians – and an ongoing investigation into the activists who have been accused of “incitement to religious hatred” and of “publicly insulting” the politically-connected priest.

Rydzyk’s Lux Veritatis foundation, which also controls the TV Trwam station and a mobile phone network, has received millions of pounds in state funding for different projects since the PiS party returned to power in 2015.

According to a website set up by the Civic Platform, his organizations have received more than 165 million złoty (£33.1 million) in public funding in three years.

This January, Lux Veritatis began the construction of a geothermal power plant with the PGE Polska Grupa Energetyczna, state-owned company. Its energy projects have controversially received millions in government grants.

Since 2015, the foundation’s College of Social and Media Culture has also received more than a dozen state grants. In 2016, for example, it received 3 million złoty (£600,800) to provide media training for Ministry of Justice staff.

Last year, Kierwiński and another Civic Platform MP filed a complaint to the Central Anti-Corruption Bureau over a 70 million złoty (£14 million) grant to Lux Veritas from the Ministry of Culture to build a museum they said wasn’t needed.

The grant was officially for a museum to “promote the history of Poland, and the Polish heritage”, with a particular focus on the late Pope John Paul II.

But the MPs allege that it was actually a kick-back for the priest’s “long-term and uninterrupted” support of the PiS.

They noted that there were similar institutions already in Poland, and claimed the construction of a new museum was being used to “rationalize and justify the transfer of millions from the treasury to the foundation”.

Kierwiński told openDemocracy the authorities refused to investigate it.

After the PiS won the 2015 election, Kaczyński said at that year’s event: “without you, Father Director, this victory wouldn’t have been possible”.

Immediately after he became prime minister, in 2017, Mateusz Morawiecki of the PiS met Rydzyk at the radio station and pledged in an interview to support the “re-Christianization of Europe”.

Though the priest has appeared increasingly disappointed with the PiS and his relations with the party strained. Some of his allies have fallen out of favor themselves with the party’s leadership and have lost decision-making posts.

The new RPE party is expected to follow a Catholic and nationalist agenda  – and could push the PiS to embrace an even more conservative agenda.

It has not yet released a manifesto, though Piotrowski suggested that it would have similar goals to the Europa Christi movement founded in 2016 in Poland by another controversial Catholic priest, Ireneusz Skubiś.

Skubiś says “Christianity [and] the Gospel should become the constitution of a new and modern Europe”. Though he said Europa Christi “has been apolitical since its inception” and has nothing to do with the party that “appropriated its name” without permission.

Rydzyk – who cannot as a priest be officially linked to a party – has also publicly denied any association with the RPE. He's further threatened to take legal action against anyone who suggests that he’s behind it, saying this is “a big lie, lack of good will, simply evil”.

"Religious clergy do not get involved in politics in Poland or the European Union”, added Piotrowski, when asked directly about Rydzyk’s role. “Since it has been repeated in the media many times, it has stopped being funny".

Though Piotrowski is a well-known ally of the priest and the party’s candidates are expected to include other commentators on his media channels, lecturers at his network's university or politicians who have supported him or his organizations.

Aiming at the European elections

Women’s rights activists stress that Rydzyk’s influence in Poland and the threat posed by the new RPE party should not be underestimated.

“Rydzyk is a priest, after all, and many people consider him an authority and a role model”, said Marta Lempart, another activist with Polish Women’s Strike, noting that “as women, we are given special emphasis in his hateful rhetoric”.

Agata Maciejewska from the Dziewuchy Dziewuchom Foundation, a Polish women’s rights organisation, said that her group has been tracking “an increased activity of far-right tendencies in Poland and Europe”.

She described it as “no secret that an ever-closer integration of ultra-Catholic and nationalist organizations is taking place” and said “the increased intensity of preparations for the European Parliament elections” is “a tactical move”.

In particular she said it was “very much linked to the activities of the conservative lobby” including the World Congress of Families (WCF) network that “has for years been an incubator of conservative ideas”.

This year’s WCF summit will be held in Verona, Italy in late March. It will be attended by senior Italian politicians including Matteo Salvini from the far right Lega party. No Polish politicians are currently listed on the programme though several have attended these events in the past.

Lempart emphasized what's at stake. If parties like RPE succeed in the European elections, she warned, “attempts to do away with women’s basic rights” will reach new heights, and “the level of an EU institution such as the Parliament”.

[Lidia Kurasinska is a freelance journalist covering eastern Europe and the Balkans. Follow her on Twitter @LidiaKurasinska.]