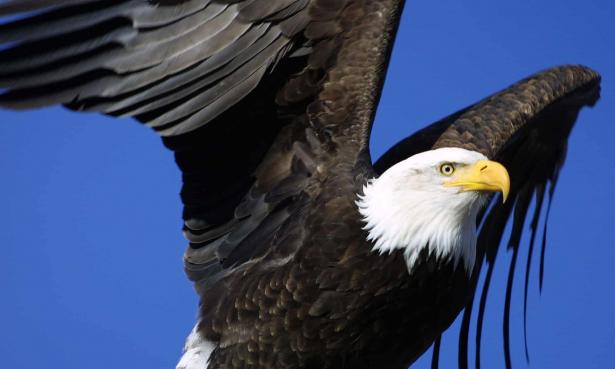 The bald eagle is often touted as a conservation success story, having been brought back from the brink, but other species now face a new threat from a change of emphasis in Washington. , Photograph: Ron Winn/AP

When America was choosing its national animal, Benjamin Franklin was determined the bald eagle shouldn’t prevail. The eagle, Franklin said, was a “bird of bad moral character” with a better option being the turkey, which Franklin considered pleasingly courageous if a little “vain and silly”.

Franklin’s view didn’t prevail, of course, but turkeys very nearly outlasted bald eagles in the US. Shot, poisoned and made homeless by rampant habitat destruction, there were just a few hundred nesting bald eagles left in the 1960s before a determined conservation effort ensured the national symbol wasn’t snuffed out.

Bald eagles are often held up alongside American alligators and whooping cranes as examples of the great species revivals that have taken place in the 45 years since the Endangered Species Act (ESA) arrived to stem the bleeding of American wildlife. “It’s been remarkable in pulling back some species from the brink,” Seabird McKeon, an ecologist at St Mary’s College of Maryland, said of the ESA.

Many conservationists now fret this progress is at risk of being reversed as the Trump administration looks to refashion endangered species protections in order to ease conditions for industry, particularly those involved in oil and gas. Along the way, some species may risk being pushed close to extinction.

The ESA currently lists more than 1,600 species as being at risk, with listed species afforded protections in their habitat that can stymie activities such as building construction, hunting and mining. This approach has so far proved relatively successful, with just 1% of listed species ever becoming extinct.

Significant elements of the protections are being picked apart, however. In July, the Trump administration proposed ending the practice of providing the same protections to species whether they be endangered or the less serious designation of threatened. The administration also wants economic impacts to be considered when species listings are decided, with species removed from the list more easily.

Separately, the administration announced it will no longer pursue people or businesses for the unintentional killing of birds, such as when the Deepwater Horizon oil spill in the Gulf of Mexico wiped out up to a million birds in 2010.

David Bernhardt, a former oil lobbyist who is now Donald Trump’s choice to be interior secretary, wrote that the ESA changes will remove an “unnecessary regulatory burden” on companies and stop species lingering on the endangered list for too long.

“Like with a hospital’s intensive care unit, the goal is not to keep patients there forever,” Bernhardt, currently deputy secretary of the interior, wrote in the op-ed. “The goal is recovery – to send the healthier patients home where they can continue to receive the lower level of care they still need.”

Critics of this approach argue that species that have ostensibly recovered should retain their protections to avoid plunging populations in the future. Court battles have started to crop up, such as the successful attempt to block the delisting of grizzly bears to allow them to be hunted around Yellowstone last year. 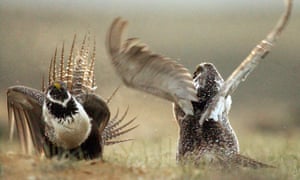 Conservation groups have sued to protect the habitat of the sage grouse from drilling. Photograph: Jerret Raffety/AP

As species’ protections risk fraying, the incoming stream of new additions to the ESA has somewhat slowed. The Trump administration’s first 22 months saw the fewest number of species listed over the same period since the Reagan administration.

Just 15 species were added to the list, compared with 56 under the Obama administration and 70 under George W Bush, according to Center for Biological Diversity data. Conservation groups have begun to sue to hurry up the protection of dozens of species, from the Sierra Nevada red fox to the Puerto Rico harlequin butterfly to the Joshua trees found in the eponymous national park.

“They are gumming up the works,” Greenwald said. “We are hearing from people inside the Department of Interior that biologists’ recommendations to list certain species are just sitting there, unsigned. They are basically following an oil and gas wishlist to weaken protections.”

Figures provided by the US Fish and Wildlife Service (USFWS) show that the number of species listed varies greatly year to year, with slow periods during George W Bush’s presidency in particular.

“The service uses a scientifically rigorous process to determine whether a species warrants federal protection. When species are proposed for listing, the service is required by law to base its listing and delisting determinations solely on the basis of a species’ biological status and threats to their existence.”

Greenwald said that groups such as his are having to step into the breach in actions such as getting Toyota and Mazda to ameliorate the impact of building a large automotive plant near the habitat of the rare spring pygmy sunfish in Alabama, or by suing to prevent oil and gas drilling on the habitat of the imperiled greater sage grouse, a chicken-like bird in western states known for its eye-catching mating dance.

The regulatory changes may seem arcane but green groups warn they will have a material impact on species that have suffered plunging numbers due to habitat loss, pollution and climate change.

Once widespread species such as the Florida panther and red wolf are now mysterious remnants in shrinking surrounds. Certain species of salmon are vanishing, there is a seeming collapse of insect populations and several species of bird in Hawaii may soon only be witnessed motionless on perches in museums of natural history.

“We tend to think of ourselves as a nation of wilderness but that is changing and there is something in the American character we are losing with those species,” said McKeon. “People have to realize once again that we can be aided by science to take the right steps. We need some understanding and willingness to engage, which is lacking at the moment.”

Oliver Milman is an environment reporter for Guardian US. Twitter @olliemilman