A Year After the March, Gaza Organizer Explains Why the Protests Continue

‘This is why snipers are mainly targeting teenagers: to break their spirit.’ 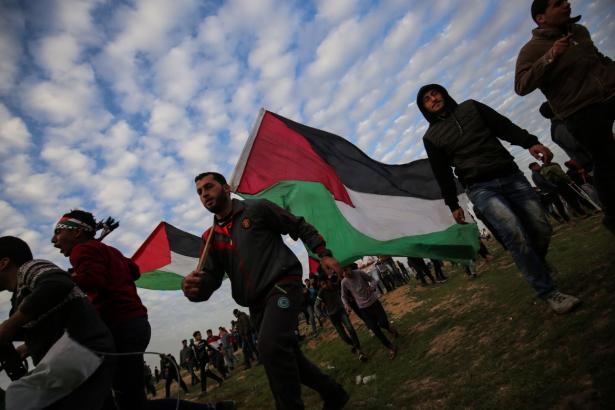 Salah Abdel Ati lived through the First Intifada as a young student and a leader of the student movement in Gaza. Now, in very different circumstances, he is one of the organizers of the protests taking place along the dividing line between Gaza and Israel. He came to Rome for a series of events organized by Cultura è Libertà, Assopace and Rete Romana, part of his European tour that also included a stop at the EU Parliament.

Speaking with us in the courtyard of the International Women’s House in Rome, he summed up a year of non-stop demonstrations in Gaza, an event that reminded many of the Intifada.

“On March 30, the Great March of Return will be one year old,” he said. “We will evaluate the mistakes made and the prospects for the future. We will launch the ‘A Million Places’ initiative, featuring events outside Palestine, in the Middle East and worldwide, aimed at bringing the Palestinian issue to attention again.”

How did the March start, and on whose initiative?

It started from a push by young people, determined to find a different solution for Jerusalem than Trump’s view, the advance of Israeli colonization and the continued siege of Gaza. We wanted to focus on popular resistance. More than a year ago, all of us got together—NGOs, youth movements, civil society, political leaders, women’s organizations—to discuss and launch an initiative. It was meant promote three messages: the right of return of the refugees, the unity of the Palestinian parties and the end of the siege on Gaza. We identified the means and divided up responsibilities. At the first demonstration, on March 30, 2018, we were one million strong. Families, children, youth, workers, refugees—for the first time in a long time, we were all together, including the political parties, and flying one flag, the Palestinian one.

It was supposed to end on May 15, the anniversary of the Nakba. Why did you choose to continue it?

It was impossible for us to stop after what happened on those days, on May 14 and 15: Trump moved the US embassy from Tel Aviv to Jerusalem, and the Israeli army committed a massacre in Gaza. Israel strikes back against all forms of resistance, whether armed or non-violent. The only way to get any result is to put pressure on the occupation: because of these demonstrations, which were followed by others organized in solidarity in Jordan, Lebanon and the West Bank, we managed to get the Rafah crossing to Egypt re-opened, which had been closed for almost all of the previous year.

In the West Bank, the Palestinian Authority has been repressing the marches in support of Gaza.

The PNA’s police has been repressing the demonstrations, and has also tried to bring the activists to heel, taking them in for questioning. Mahmoud Abbas is very afraid of change. He does not want reconciliation with Hamas unless Hamas gives him total control over Gaza, with no dialogue, a completely free hand. He is violating the rights of the Palestinians in the West Bank, just like Hamas is doing in Gaza. This lack of unity is harming us at this time of serious political crisis and external pressure. Palestinians are demanding one unified national project: the return of the PLO and parliamentary and presidential elections. A new system that would be democratic and shared.

Does the march still have this potential to exert political pressure? Many believe that it is now under the control of Hamas.

The March is not under the control of Hamas. Those who are participating are really from the grassroots, youth movements, NGOs. There are committees organized for different directions of activity: communications, youth, women, the BDS movement, refugees, healthcare. It is true that Hamas is in control of Gaza, as it is the government there. Hamas is an important part of the initiative, but it is not its leader. But Hamas doesn’t have exclusive control over Gaza in any case: there is also the Israeli occupation, as well as the foreign delegations which keep arriving, like the Egyptian or the Qatari, who are looking to play a role. In spite of these powers and their attempts to end the demonstrations, popular participation in the March is holding steady. It’s not because we want to die, but because we love life. If we haven’t been successful in creating political unity, this is due to the depth of the fractures between Hamas and Fatah.

Do people take part in the March out of enthusiasm, or out of desperation?

What is motivating people is frustration. We are persevering because we don’t want to let young people lose hope. Now they are feeling empowered, part of a new dynamic. This is why snipers are mainly targeting teenagers: to break their spirit. The lack of reaction from the international community makes the feeling of having been abandoned even more powerful. We have no other solution but to continue the popular resistance, and to invest in young people: thus, a new and democratic political leadership can arise.