As measles outbreaks continue across the country, Democrats in the New York state legislature have created a solution to the ever-increasing problem of uninformed parents creating unvaccinated children: Let the kids choose. 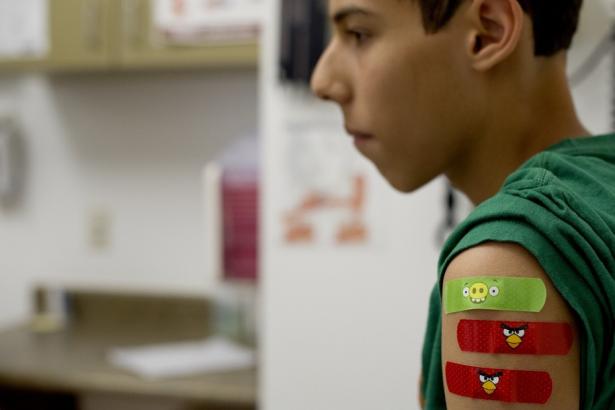 This teen got his vaccines., AFP/Getty Images

As measles outbreaks continue across the country, Democrats in the New York state legislature have created a solution to the ever-increasing problem of uninformed parents creating unvaccinated children: Let the kids choose.

The duplicate bills, introduced concurrently in both the state assembly and the state senate, would allow New Yorkers aged 14 and up to determine whether or not they want to be vaccinated, regardless of their parents’ desires.

(A06564/S04244) permits any child who is at least fourteen years of age to have administered to himself or herself, regardless of parental consent, and subject to the applicable grade or comparable age level requirements, certain immunizations required or recommended by law.

This legislation is a swift and drastic response to what the New York Times calls “New York City’s largest measles outbreak in a decade.” As of this writing, Brooklyn has documented over 100 cases, Rockland County has at least 145, and Queens reports one case. Like 12 other states, the Empire State finds itself battling a disease that was all but eradicated nearly twenty years ago—in no small part due to unvaccinated populations.

“We are on the verge of a public health crisis,” said one of the bill’s sponsors, Assemblywoman Patricia Fahy, a Democrat from Albany, citing lower-than-recommended inoculation rates in some communities, spurred by unconfirmed suspicions about vaccines causing autism. “We’ve become complacent over the last couple of decades.”

The World Health Organization named “vaccine hesitancy” one of the top ten global health emergencies in 2019, citing a 30 percent global increase in measles alone. Vaccine hesitancy, of course, is about more than just the anti-vax movement, which is based on wholly debunked junk science that ties autism to efforts to obtain herd immunity. New York’s bill, if passed and signed into law by Democrat Gov. Andrew Cuomo, would permit teenagers to take their health into their own hands, and override the so-called "religious exemption" that is currently placing others in danger.

(Vaccination requirements) shall not apply to children whose parent, parents, or guardian hold genuine and sincere religious beliefs which are contrary to the practices herein required, and no certificate shall be required as a prerequisite to such children being admitted or received into school or attending school.

This loophole is ripe for exploitation by the anti-vax community—the internet is ripe with guides to keep kids across the nation in school without getting their shots. While all 50 states honor medical exemptions for those who might be immunocompromised, the acceptance of “philosophical exemptions” make 17 states the easiest terrain for anti-vaxxers to navigate; 47 states and the District of Columbia only offer accept exemptions for “religious” objections. (California, Mississippi, and West Virginia only offer medical exemptions.)

Ethan Lindenberger, 18, made headlines and spoke to Congress just last week about his own choice to vaccinate against his parents’ wishes. Lindenberger is from Ohio—one of the 17 more lenient states.

As he approached high school, Lindenberger began to do his own research on the matter and quickly learned that there was no scientific evidence that backed up his mother's concerns.

"I approached my mother numerous times trying to explain that vaccines are safe and that my family should be vaccinated, approaching even with articles from the CDC explicitly claiming that ideas that vaccines cause autism and extremely dangerous consequences were incorrect," Lindenberger said. In once such instance he said his mother responded with, "That's what they want you to think."

So how does one counter such dangerous and deeply held beliefs? Lindenberger suggests lowering the vaccination age, and Assemblywoman Fahy listened: She cites his story as an impetus for the bill. In New York, which does not permit philosophical exemptions, Fahy and her fellow legislators hope that empowering and informing teenagers helps the state get one step closer to reclaiming the herd immunity so many communities once claimed.

If the bill becomes law, New York will be far from the first state to permit minors to choose whether to vaccinate themselves without parental consent. Hopefully, they also won’t be the last.