Inequality 101: Why the College-Admissions Scandal Is So Absurd

The 33 wealthy parents charged in the recent college admissions scandal chose to participate in an organized criminal conspiracy to get their kids into elite schools. It was much cheaper than the “legal” bribes and scams used by others of their ilk. 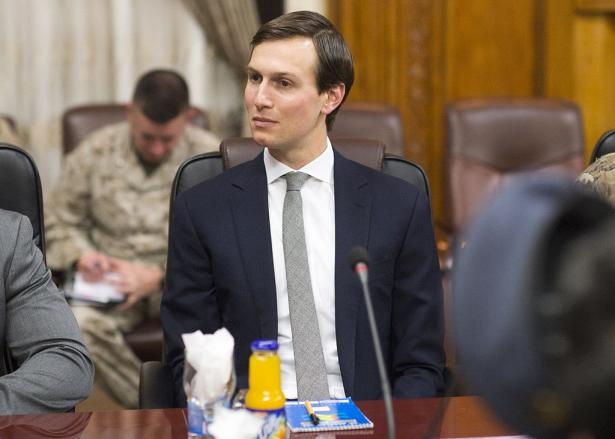 Jared Kushner, senior advisor and Presidential son-in-law, miraculously got accepted to Harvard after a tax deductible $2.5 million “legal” bribe from his father in 1998. , DoD Photo/Dominique A. Pineiro

A coast-to-coast FBI probe alleges that a network of celebrities, business executives, and other powerful figures is at the center of a massive bribery scheme to secure admission into some of the country’s most elite colleges, according to court documents unsealed earlier today.

Among the defendants are nearly three dozen parents whom federal prosecutors are charging with conspiracy and other crimes for allegedly using hefty sums of money to get their children into schools such as Yale, Georgetown, and the University of Southern California. Specifically, the newly unsealed court documents contend that these high-rolling parents—some of them public figures such as the actresses Felicity Huffman and Lori Loughlin, as well as Loughlin’s husband, the fashion designer Mossimo Giannulli—paid hundreds of thousands, and sometimes millions, of dollars per child to a fixer who would then use that money to allegedly bribe certain college officials or other conspirators to help secure the child’s admission.

The country’s elite have long used their wealth to get their kids into top colleges via legal and widely recognized means—legacy and athletic admissions tend to favor the wealthy, and those who can pay for test prep and expensive sports get an additional leg up. In extreme cases, wealthy parents make hefty donations to schools, or, for example, pay for new campus buildings. The 33 parents now being charged allegedly opted instead for organized conspiracy. The alleged bribes were certainly cheaper than a building, and much simpler than paying for years of sports training. But the children of wealthy parents unwilling to risk jail time still get thumbs put on the scale for them in elite admissions offices every day.

That alleged fixer behind the scheme described by the FBI is a business owner named William Rick Singer, who this afternoon pleaded guilty to all the charges against him, including several counts of conspiracy as well as obstruction of justice. The government accuses him of setting up a sham charity to launder the money he collected and spent while perpetrating two primary forms of bribery. One involved third-party individuals fraudulently taking the SAT or ACT on behalf of his clients’ children; the other involved paying coaches to recruit and admit students with made-up “impressive” athletic resumes, a federal official contended at the Tuesday press conference. Many of these so-called profiles, according to the court documents, were replete with staged (or Photoshopped) images and fabricated narratives. He did not immediately respond to a request for comment submitted by The Atlantic through his admissions-advising company.

Charges are also being brought against 13 college coaches, including Yale’s head women’s-soccer coach, who allegedly accepted a $400,000 bribe to admit a student as one of his recruits even though the student had never played competitive soccer.

The biggest victims of this epic alleged scheme, of course, are the higher-caliber students whose prospective tickets to the prestigious colleges were given instead to these teens, whose parents had the savvy and gall to break the rules. But what’s even more disenchanting is that these revelations, sensational details aside, underscore a fact of American life: that the elite-college admissions system is broken.

“When federal prosecutors indicted Hollywood celebrities and other wealthy individuals for paying bribes to have their children admitted to selective colleges, we saw the logical culmination of a more subtle practice that has been going on for decades,” said the education scholar Richard Kahlenberg, who studies legacy admissions and is a prominent critic of them, in an email.

In the Tuesday press conference, the U.S. attorney perhaps unintentionally emphasized this irony when he said: “We’re not talking about donating a building … We’re talking about fraud.”

His comment highlighted the mundanity of admissions favors for upper-crust children—when executed legally. Sometimes these favors are given through a practice known as “legacy admissions,” in which elite colleges give preference to an applicant who, say, is the child of an alumnus. A common denominator tends to be wealth, particularly if the applicant is otherwise underqualified. A parent may offer a college a handsome donation (and, sometimes, a namesake building) to boost her child’s admissions prospects.

“Every year, alumni contribute to their alma maters with the expectation of special treatment for their children,” said Kahlenberg, who’s involved in a separate pending lawsuit over Harvard University’s consideration of race in admission. “This more genteel form of bribery is considered perfectly legal. Not only that, the donors get a tax break to boot, undercutting the fundamental legal principle that a charitable donation should not enrich the donor.”

A famous example involves Jared Kushner, President Donald Trump’s son-in-law and senior adviser, whose father, then a wealthy real-estate developer, in 1998 pledged $2.5 million to Harvard. Kushner—who, the investigative reporter Daniel Golden notes in his 2006 book, The Price of Admission, was described by administrators at his high school as a mediocre student—was admitted to the school shortly after that. A spokeswoman for Kushner Companies told Golden in 2016 that Kushner’s admission to Harvard had nothing to do with his father’s gift to the institution, and noted that the family had donated extensively to numerous universities.

Today, legacy students account for an estimated 14 percent of Harvard’s undergraduate population, and applicants who enjoy such alumni connections are accepted at five times the rate of their nonlegacy peers (a nearly 34 percent acceptance rate, versus just under 6 percent for those lacking connections). Surely not all of those legacies’ families made huge donations to the school, but students with a family history at an elite institution are likely to come from wealthy backgrounds that confer various other advantages.

It’s unclear how Harvard’s legacy numbers stack up against those at other elite colleges—the Harvard data were publicized because of the affirmative-action lawsuit—but a separate national survey in 2018 found that nearly half of private higher-education institutions consider legacy status in acceptance decisions. While colleges err on the side of keeping mum about their practices, they tend to acknowledge that such applicants have at least a slight advantage.

At elite colleges, athletic recruitment is arguably another form of affirmative action for the wealthy. As my colleague Saahil Desai has written, Harvard’s admissions office, for instance, gives a major boost to athletes with middling academic qualifications. Athletes who score a four (out of six) on the academic scale Harvard uses to judge applicants were accepted at a rate of about 70 percent, Desai reported; the admit rate for nonathletes with the same score was 0.076 percent. And research suggests that these athletic recruits tend to come from middle-class white families. Julie J. Park, an education professor at the University of Maryland, concludes in her 2018 book, Race on Campus: Debunking Myths With Data, that as many as 40 percent of Harvard’s white students are legacies or recruited athletes.

Fraud and bribery are shocking, yes. But fraud and bribery’s lawful cousins—legacy preferences, athletic recruitment, and other admissions practices that lower the bar for progeny of the rich and famous—are ubiquitous.

[ALIA WONG is a staff writer at The Atlantic, where she covers education and families.]