It’s hard for anyone to miss a “help wanted” sign like this: “13,000 Union Workers Needed for Atlantic Coast Pipeline Project.” 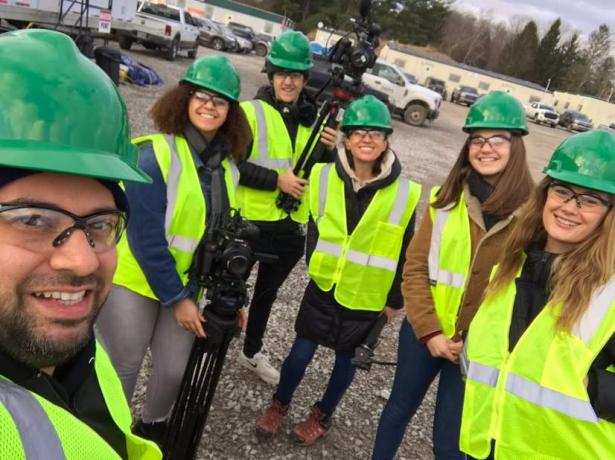 That’s how the website Oilfield Job Shop described the opportunities created by the $7 billion Atlantic Coast pipeline, planned to carry shale gas 605 miles from West Virginia into Virginia and North Carolina. Its builders, a group led by Dominion Energy, say all told, the project will support 17,000 jobs — no small amount of work anywhere, but especially in parts of West Virginia where the economy has long relied on coal mining.

So, when high school students working with PBS NewsHour's Student Reporting Labs in Morgantown, West Virginia, set out to find out what “opportunity” looks like in 2019, they quickly zoomed in on pipeline jobs.

“Originally, the assignment was to answer questions about opportunity in West Virginia for young people, but when we looked into the job opportunities and what industries they’re growing in and what aren’t, really the only industry that really is growing is the natural gas industry,” said Student Reporting Labs reporter and Morgantown High School student Makael Virji, “and so that’s the one we focused on.”

The students were particularly interested in the kinds of jobs that could let workers stay in or near their hometown, a small city (population: 138,000) on the banks of the Monongahela River in north-central West Virginia.

Earlier reporting by a different PBS project revealed that the 17,000 jobs advertised for the Atlantic Coast pipeline didn’t stand up to scrutiny. For one thing, that number is based on an estimate that re-counts the exact same position each year. “In other words, if someone was hired for a job that lasted for six years, that would count as six cumulative jobs,” Community Idea Stations reported. It added that during an average year, the pipeline would directly employ 1,556 workers (and the projections then added in a nearly equal number of spin-off jobs, also multiplied by six years).

At no point, in other words, was the pipeline project hiring 13,000 union workers at one time.

“It was trouble finding out how many jobs the pipeline would create,” another SRL reporter, Kyle Shaw, told DeSmog.

So, they went to the source, interviewing Dominion’s Brittany Moody, lead engineer for the Atlantic Coast pipeline.

“I’m thinking in the low 20’s range for permanent employees,” she tells Student Reporting Labs in a roughly six-minute video report produced by the students.

“So, when we first went there and we heard that, it was kind of shocking,” Student Reporting Labs reporter Maya Krueger told DeSmog, “because we went there specifically to investigate and report on the growth and the opportunity for West Virginians.”

“We also followed up and went to the Monongalia Technical Education Center or MTEC and then interviewed people who were welders in training and were about to go into the pipeline industry or work on construction jobs like that,” added Krueger, “and they knew that they were temporary but it’s still kind of almost — still shocking and frustrating that these jobs are not actually helping boost West Virginia as a whole.”

The students interviewed a young worker on the pipeline project who hailed from out-of-state and a welding school student who wanted to stay in West Virginia after graduation. The latter hoped for a pipeline job that she thought could potentially last two to seven years.

For a broader perspective, the high school students turned to an economics professor at West Virginia University in Morgantown.

“The long-term effect of these short-term jobs, construction jobs in the natural gas industry, is that we might be encouraging students to not build the skills that they might need for our future workforce,” Professor Joshua Hall told SRL.

Students who want to stay local face difficult circumstances and not just because pipeline jobs are so fleeting.

“And so, I think that one of the big things, in terms of my students and their future, is that Appalachia will be impacted significantly with climate change,” said Tiphani Davis, a Morgantown High School teacher.

“In the coming decades, a changing climate is likely to increase flooding, harm ecosystems, increase some health problems, and possibly threaten some recreational activities,” with impacts for the tourism industry, a U.S. Environmental Protection Agency fact sheet on how climate change will impact West Virginia reports.

Nonetheless, in a city surrounded by counties where coal mining has a history that runs back decades, addressing questions of climate change requires first getting students to look directly at the subject and not just at rhetoric.

“At literally every single point of our story process, we had to make sure that we wouldn’t change our story because of our personal bias,” SRL reporter Alia King told DeSmog.

What Are the Options in Coal Country?

“There’s very little solar energy or wind energy or anything in this state,” said Virji.

SRL reporter Paxton Marner called attention to the role that coal money played in state politics. “We have a lot of issues especially with the government investing in renewable energy because a lot of the politicians do accept large donations, their campaigns and whatnot, from big energy,” Marner said.

“It’s kind of like a cycle, really, because the people here only know coal,” said Marner. “That’s like their way of life and they’re dependent on it and there’s no way to shift out of it if the people in power don’t do anything about it.”

The pressures the high school class described, both economic and ecological, can help explain what’s propelled the Green New Deal proposal in Congress to gather significant steam since then-Congresswoman-elect Alexandria Ocasio-Cortez and a coalition of groups including the Sunrise Movement, 350.org’s Youth vs. Apocalypse, and others shut down entrances to Rep. Nancy Pelosi’s office in December 2018. A Green New Deal resolution introduced by Rep. Ocasio-Cortez and Senator Ed Markey has drawn the support of 100 Congresspeople (89 in the House and 11 in the Senate) and the policies it outlines poll strongly among registered voters (as DeSmog previously reported).

But, as the Student Reporting Labs project shows, so too are the economic and environmental challenges facing young people in West Virginia and beyond.

For now, the Atlantic Coast pipeline has run into serious difficulties of its own. A federal court tossed a permit that would have allowed the pipeline to cross through the George Washington and Monongahela National Forests in a lawsuit brought by the Southern Environmental Law Center, with a Fourth Circuit panel finding on appeal that the Forest Service had “abdicated its responsibility to preserve national forest resources” when that permit was approved.

Dominion Energy told ABC News on Tuesday that it plans to appeal that decision up to the United States Supreme Court.