books A Grim Take on the State of the News Business

A look at the state of investigative reporting and long form journalism, a former New York Times editor details threats to an informed public coming from the decline of newspapers and the rise of social media gimmicks that beggar fact-based writing. 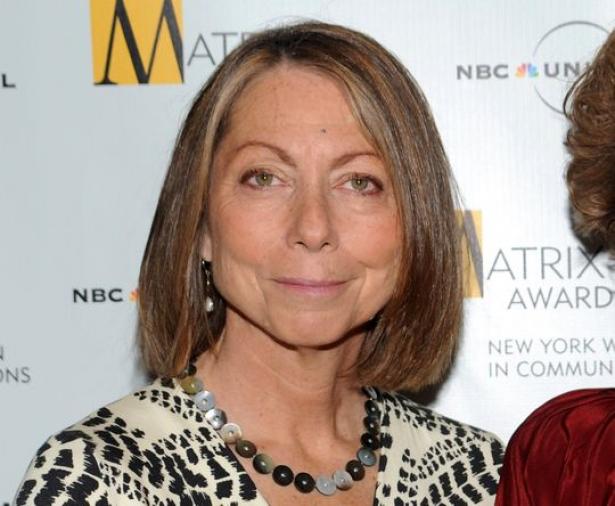 Jill Abramson in April 2010 at the Matrix Awards presented by the New York Women in Communications at the Waldorf-Astoria Hotel in New York.,Photo: Evan Agostini/ AP // USA TODAY

One of the facts bemoaned by traditional journalists in the current state of the news business is that, with a growing banquet of news to offer on any given day, in any given hour, consumers are opting for boiled down listicles and scannable reads.

It's the antithesis in style to what The New York Times used to embody, particularly by its former senior editorial leader, Jill Abramson, the first woman to serve as the paper's Washington bureau chief, managing editor and executive editor – the top job in American print journalism.

But as everyone knows (because news biz gossip is as eagerly gobbled as royal gossip these days), Abramson didn't last long at the top; just three years. In May 2014, she was fired for allegedly poor management and being too "difficult" (that ever useful pejorative applied to formidable women) for even hard-boiled Times journalists to handle.

Her account of what happened (fantasy clickbait hed: "Why I was fired and what happened next!"), as laid out in her new book, "Merchants of Truth: The Business of News and the Fight for Facts," is absorbing and fair – and it's likely the first section many journalists will turn to.

"There was no simple reason I was fired. I was a less than stellar manager, but I also had been judged by an unfair double standard applied to many women leaders. Most of all, I became the first woman editor at a very bad time in journalism," she writes.

But later, Abramson found herself with time to contemplate journalism in its "Age of Anxiety," the existential crisis in the industry she loved. Now comes "Merchants," published Tuesday (Simon & Schuster, ★★★ out of four). 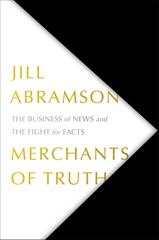 Reviews have been generally positive so far, mixed with some sharp criticism. There's already been a contretemps over whether she accused the Times of being biased against President Trump in its coverage, thus abandoning its "straight" approach to news. She batted that away as an exaggeration of something taken out of context. A fair reading backs her up.

Now she and her publisher are dealing with more serious charges of factual errors and plagiarism lodged late Wednesday in a series of tweets on Twitter by a reporter for one of the four news organizations she examines in the book, Vice –  which under her astringent gaze does not come off as a journalistic paragon, especially in its sophomoric early years. 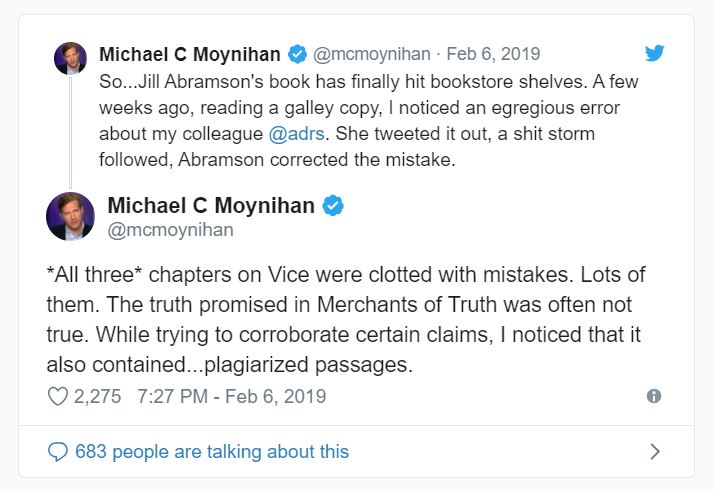 Simon & Schuster issued a statement Thursday promising revisions if warranted in the 534-page book. Abramson also issued a statement to USA TODAY that the passages in question involve facts that were imperfectly cited in her 70 pages of footnotes. "I wouldn’t want even a misplaced comma so I will promptly fix these footnotes and quotations as I have corrected other material that Vice contested," she said.

So, stay tuned. Meanwhile, the book as published documents the crisis: Journalism may have not yet been annihilated but the barbarians are at the gate and banging hard. More news than ever is out there and more people than ever are in need of reliable information in order for democracy to function, Abramson observes.

At the same time, she reports, the journalism business model is stuttering and a steadier replacement is not yet obvious. Every news company struggles to produce a product for the digital age amid sharp staff cuts, while more consumers, marinated in "the internet is free!" assumptions, are unwilling to pay for it, Abramson says.

Abramson explores this grim state through the experiences of two legacy media titans, her former employer, the Times, and the Washington Post, fighting to retain their "values" in a maelstrom, and two digital titans, BuzzFeed and Vice, "improbable players" in an arena where social media drives large numbers of consumers to news. Plus, there's a section on Facebook, so crucial in so many ways to publishing on the internet these days.

"I was determined to capture this moment of wrenching transition – and to do it as a reporter, my first calling," Abramson writes. "...I would chart the struggles of four companies to keep honest news alive."

The book is about the stuff that haunts journalists' nightmares lately: What the hell do we do now? Is there a future for the old matrix of the news industry? Why has the public trust we took for granted dissipated and can we get it back? How best to cover Donald Trump, a president who is a gobsmacking news story every minute and also calls the media an "enemy of the people"?

Abramson has her pet peeves: The sometimes dishonest nature of clickbait headlines, designed to capture attention but promising more than they deliver. Tedious business meetings watching PowerPoint presentations of eye-glazing data charts. The "ridiculously" few women in senior editing jobs at the Times, a deficit she is most proud of improving during her tenure.

She is especially alarmed about the chipping away of the traditional wall between the news side and the business side – unremarkable to the digital media world of Vice and BuzzFeed but anathema to legacy media types. When the new CEO of the Times told her he expected new "revenue-producing products" to come from the newsroom, she snapped, "If that's what you expect, you have the wrong executive editor...The truth had flown out of my mouth before I could edit either its substance or tone." It did not go over well.

Abramson doesn't see an entirely trouble-free future for any of her examined news organizations, despite their various successes. "All four are endangered," she warns. That even goes for the Post, which was rescued in 2013 by its "white knight," Amazon billionaire Jeff Bezos, who personally bought the family-owned paper for $250 million with the idea that "restoring its glory would be a contribution to democracy."

Even before "Merchants" published, the pitiless bottom line stomped all over legacy and digital news companies alike. Last week, both BuzzFeed and Vice laid off about 250 journalism workers each, just some of the more than 2,000 journalists who have been laid off or bought out since the start of 2019 (including at Gannett, the parent company of USA TODAY). So even digital natives are failing to capture enough ad revenue and subscriptions to cover their rising costs – thanks to Google and Facebook raids on advertising, another topic "Merchants" covers – and they don't even have the enormous expense of publishing and distributing a daily print product.

For legacy media survivors, following the trials and tribulations of two of the nation's leading newspapers may involve equal measures of envy, dread and schadenfreude. BuzzFeed and Vice, on the other hand, may seem like alien entities.

Abramson traces how BuzzFeed began with a steady diet viral cat videos, but founder and "virality" genius Jonah Peretti and his team figured out how to connect with a mostly disaffected young audience through their emotions – at the "beating heart of the internet." They pioneered a new business model – native advertising – and by the end of 2011, BuzzFeed had "pivoted" to original news reporting, beefing up its reporting staff with a goal of being taken seriously enough to compete with the likes of the Times and the Post. Its content remains a "strange stew," Abramson says, but in 2018 it was a Pulitzer Prize finalist for its investigation of suspicious deaths of Russians in Britain.

Vice started out as a print lads mag constantly pushing the bounds of bad taste in the quest to be "edgy," which led to such outrages as "The Racist Issue." Later, watching the success of YouTube, Vice hooked up with director Spike Jonze and married video to news and entertainment stories that appealed directly to a huge audience of hipsters indifferent to mainstream media. By 2007, its videos were reaching more people than its magazine.Ten years later, after starting a nightly news show on HBO, Vice's 18 hours of footage of the deadly Charlottesville, Va., Unite the Right rally garnered a total of 50 million views and became the "defining image" of the violence, Abramson says.

Abramson concludes that the Post and especially the Times have been the most successful so far in the transition to a digital-first approach to news. This week, the Times reported it now has a new high of 4.3 million total paid subscriptions, including more than 3 million digital subscribers, and is aiming for 10 million by 2025. The company also said it generated more than $709 million in digital revenue, which makes it possible to meet another goal of $800 million in digital revenue by the end of 2020.

Abramson credits former publisher Arthur Sulzberger Jr. – the man who had fired her –for "keeping the lights on" at the old Gray Lady. "The Times, despite a decade of digital disruption that had upended virtually all of its core practices and even its news standards, was still a beacon of truth and fierce protector of facts," she writes.

Non-journalists may find "Merchants" dense and complicated, with something surprising or infuriating on every page. Journalists working today already know in their guts most of what Abramson is reporting, if not in the depressing detail she presents.

Abramson earns three stars for her thoroughness and insights, but this is not a beach read, and certainly not a happy read. Unless, of course, you really do believe journalists are the enemy of the people – in which case, enjoy yourself.

Book author Jill Abramson is a senior lecturer at Harvard University. She also writes a bi-weekly column for The Guardian about US politics. She spent seventeen years in the most senior editorial positions at The New York Times, where she was the first woman to serve as Washington bureau chief, managing editor, and executive editor. Before joining the Times, she spent nine years at The Wall Street Journal.

[Essayist Maria Puenta is a journalist with some four decades of newspaper experience, including 22 at USA Today.]