Koji is a fungus believed to have been domesticated in Asia. As the spores grow, they release enzymes that break down proteins and starches into sugars. This reaction is also why koji mold is used to turn soybeans into miso, and rice into saki. 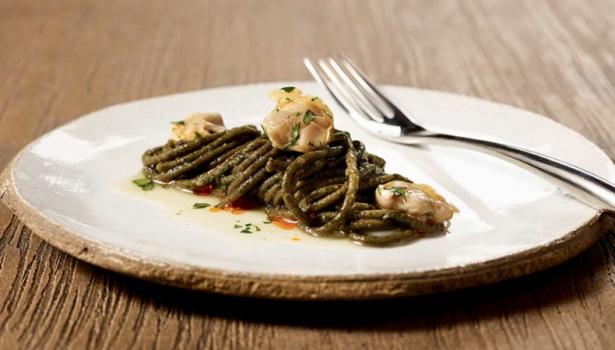 A few years ago, when organizers behind a series of Cleveland-based TED Talks reached out to Jeremy Umansky for story ideas, he pitched them a presentation about the universe of organisms—the life, the chaos, the destruction—that exists in six ounces of sauerkraut. The topic was too out there, “so I told them that I had been experimenting with koji for six months,” the chef says.

If sauerkraut is a real-life universe, then koji is otherworldly magic. During Umansky’s ensuing TED Talk, a picture flashed onto the screen of furry scallops, a result of leaving them coated in koji spores and rice flour in a humid environment for two days. Rather than acrid, the scallops smelled like honeysuckle and tasted perfectly cured. If Umansky could turn furry scallops into something delicious, what else could he do with the mold? His experiments, which he started while working at Jonathon Sawyer’s restaurant Trentina, led him to decide to open Larder, Cleveland’s tribute to koji-cured charcuterie.

Cortney Burns was already hooked on fermentation when she learned about koji. When she was at Bar Tartine in San Francisco, she rigged a dehydrator to incubate spores on steamed rice for a few days, unsure if the experiment would take. “Then I smelled it and was basically in tears—it was working,” she says. She dug in deeper, receiving a James Beard Foundation grant to study koji in Japan. At Duna, the San Francisco restaurant she runs with Nick Balla, and at the Loom, the restaurant she’ll oversee at the Tourists hotel opening this spring in North Adams, Mass., Burns uses the mother spores from a sake producer she met in Japan to sweeten a range of foods from vinegar to ice cream without refined sugar.

When we eat, our tongues only register certain combinations of molecules, amino acids, esters, fatty acids and sugars. Koji takes these complex things and breaks them down into a mire of other things. What we normally can't perceive, koji opens it all up.

It’s koji’s potential to take simple ingredients and turn them into unforgettable flavors and textures that has spurred chefs, scientists and engineers to take it beyond Japanese cuisine. And rather than guarding their secrets, koji fans share what they’ve learned to encourage others to give it a try.

The results just might change how we cook in America.

The hardest part about understanding koji is how to categorize it. “It’s not an ingredient, it’s not a technique; it’s a little bit of both,” says John McCarthy, chef/owner of Oka and Crimson Sparrow in New York City. “We take steamed rice, we inoculate it with koji, and when it has a fuzzy exterior, we have usable koji. What’s the next step? Therein lies the technique aspect.”

That technique aspect often means rewiring our brains to realize that growing mold on food is a good thing, and it helps to think about other foods that require mold, like cheese.

This link is what led McCarthy to ferment ricotta with koji. The experiment took 45 days and left the cheese with an umami level much deeper than aged Parmesan. The fermented ricotta is blended for a smooth texture and then folded into arancini made of arborio rice cooked in dashi. For a complementary fermented flavor, he pairs the arancini with a kimchi sauce ($9, recipe).

“Why would I want ricotta that’s been koji-fermented?” McCarthy asks. “I want it because, while arborio rice and cream and butter is great, a 45-day fermented ricotta is even better. It blows people’s minds.”

Why would I want ricotta that’s been koji-fermented? I want it because, while arborio rice and cream and butter is great, a 45-day fermented ricotta is even better. It blows people’s minds.

At its most basic, koji gives food umami. But its enzymatic effects change the flavor and aroma of food in a way that a pinch of MSG cannot.

“When we eat, our tongues only register certain combinations of molecules, amino acids, esters, fatty acids and sugars,” Umansky says. “Koji takes these complex things and breaks them down into a mire of other things. What we normally can't perceive, koji opens it all up.”

That next level of flavor is why Kevin Fink, chef/owner of Emmer & Rye in Austin, Texas, often uses koji on four to five items on the menu. “Koji is great at unlocking a tertiary flavor note,” he explains.

Fink brines fish in amazake, a sweet liquid koji, and incubates koji spores on a range of grains and proteins—even tricky ones like egg yolks and whites. One of the lasting applications at the restaurant involves taking charred bread, fermenting it with a 10 percent salt solution, then inoculating it with koji spores. The result is dark-brown liquid aminos that he uses in everything from marinades and broths to dressings and poaching liquids. In one dish, he drizzles the bread aminos over a simple dish of seared turnip greens, raw onions and lamb (recipe).

Koji also allows him to create new flavors from ingredients he already has on hand. Take what’s left of the umami-rich bread used to make the liquid aminos: he purées it with egg yolks and cooks the combination at 72 degrees C to create a cured egg yolk with a deeper savory flavor than most cured eggs. Fink calls it the restaurant's version of bottarga. “We use koji to expand our flavor lexicon,” he notes.

You don’t have to inoculate and incubate koji spores on grains to leverage its impact.

At Ardent in Milwaukee, Chef/Owner Justin Carlisle cultivates koji on a variety of grains. But he also goes through 32 bottles of liquid koji a month between his three restaurants (in addition to Ardent, he also runs The Laughing Taco and Red Light Ramen). No matter the style of restaurant, having liquid shio koji on hand makes it easy to magnify flavors, penetrate brines and draw out flavors from vegetables with just a splash. “We can make a complex dish out of one or two ingredients,” he says.

Take Carlisle’s “spaghetti and clams,” a dish at Ardent of seaweed, clams and chili oil (recipe). “Instead of adding lots of clam stock and then finding a vinaigrette that will accent the shellfish, it’s just clam juice and koji,” he says. “But it tastes like this voluptuous, juicy clam.”

When Burns first started experimenting with koji at Bar Tartine, liquid shio koji wasn’t easy to come by. So she made her own, first growing koji on rice (recipe), then using that product to make salt koji (recipe). Her version is similar to the commercial liquid koji, but it isn’t strained. “It’s got a ton of natural umami,” she says, explaining that a splash on trout or chicken is enough to tenderize the meat and give it deep flavor. “We use it in anything you would want to add salt to.”

Even dessert. Burns discovered that the spent rice from growing koji becomes sweet because the mold breaks down complex carbohydrates into sugars. “I use it as the base of ‘rice cream’ to set ice cream,” she says, explaining that the rice acts as a stabilizer, allowing her to skip adding refined sugars to make ice cream.

Koji has another advantage: it can rapidly break down the surface of food into enzymes, which may make it a modern answer to the old way of aging meat.

The benefits of this accelerated timeframe is one of the reasons that Umansky has made koji the center of his charcuterie at Larder. Take bresaola. Aging it the traditional way can take anywhere from six weeks to three months. Using koji, Umansky says, takes two weeks, yet the result will have the same proper pH and water activity as bresaola that has aged for much longer. And aging beef is an even faster process. Aging beef with koji spores for 48 hours produces a product with a flavor profile and texture that tastes somewhere between a 30- to 45-day aged product. “The great thing is we have no loss,” Umansky says of the technique, which could change the availability and price of aged meat.

It also can make dairy products more stable. Culture sour cream with koji, and “it becomes indestructible,” Umansky says. “You can mount any sauce with it, turn it up to a boil, and it won’t break.” He also uses cultured cream in amazake buttermilk bread (recipe).

Could this be a game changer for the restaurant industry? “I think the implications can go much further,” Umansky says, explaining that koji could eventually help lessen food deserts and make better-quality meat more affordable. “When you catch the bug, it’s infectious,” he adds.

“For me, koji isn’t going anywhere,” adds Carlisle, who like other chefs, doesn’t see it as a passing trend. “It’s a staple in the way we do things now.”

Koji is a fungus believed to have been domesticated in Asia centuries ago. Unlike mushrooms, it’s not eaten on its own but instead grows on partially or fully cooked grains or legumes inoculated with spores. As the spores grow, they release enzymes—proteases and amylases—that break down proteins and starches into sugars. This reaction is also why koji mold is used to turn soybeans into miso, soybeans and wheat into soy sauce, and rice into sake. It’s so revered in Japan that it’s called the country’s national mold.

Koji confusingly can mean the spores themselves and the grains that have been inoculated with them, or the ready-to-use mold. The most common strain is aspergillus oryzae. Here are some of the koji forms you can buy:

Made by combining koji with water and salt, liquid shio koji (also called salt koji) is ready to use in marinades, sauces and broths. Buying a bottle is the easiest way to start experimenting with koji’s enzymatic power.

These rice grains have been coated with koji spores. They can be incubated to grow koji mold or blended into a powder and used directly on meat and fish to cure proteins.

These mold spores—also called koji-kin—are inoculated on cooked rice and incubated in a humid environment for about three days. The same technique can work on other cooked grains and even some proteins, but experiments require trial and error.

A Japanese black vinegar, kurozu is not the only vinegar made with koji, but it is one of the most unique. Kurozu is made by combining koji with steamed rice and water. In a few months, after stirring every so often, the koji turns the mixture into vinegar. It then ages for a few years before it’s bottled.