Stripping the Value from Food Labels

New regulations allow the food industry to hide important information from consumers, and it could get worse. 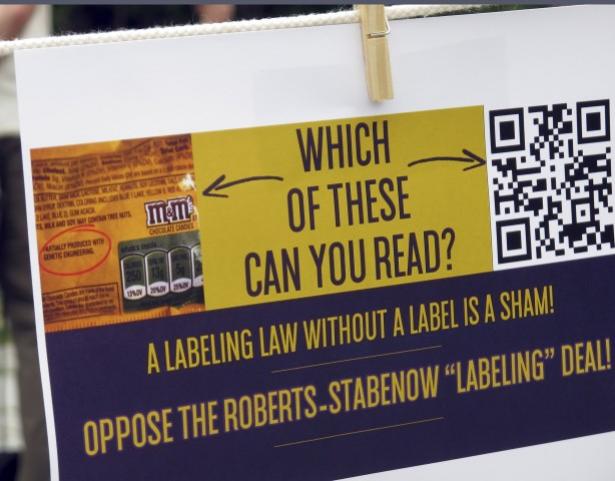 A sign hangs at a Montpelier, Vt. rally protesting a proposal by Congress that would allow companies to use computer labels to indicated whether a product has been made with the help of genetic engineering.,Wilson Ring/AP Photo

Walk down the aisle of your local grocery store, pick up any food item, and you’ll get instant access to a wealth of information on everything from nutrition facts to allergens. Consumers have long relied on food labels, but the Department of Agriculture now appears to be moving to allow food companies to replace this easily accessible information with a scannable code that sends shoppers to a website for the very facts that used to be in front of their faces.

But the real endgame is more insidious. By stripping information from packages and disclosing it only on websites the average shopper will most likely never visit, online labeling allows the food industry to strip American consumers of the ability to make informed choices about the groceries they buy.

Right now, new regulations permitting online labeling (known as “digital disclosure”) are limited to whether or not a food item contains genetically modified ingredients (GMOs). Although there is no evidence that GMOs pose an intrinsic threat to human health, consumer advocates have raised reasonable concerns about their relationship to pesticides and their role in an industrial agriculture system badly in need of reform. Responding in part to these concerns, more than 60 countries require GMO labeling, including almost all of Europe.

The new U.S. regulations, which were released in December, fill in details for the implementation of a law originally passed in 2016 that replaced a patchwork of state-level GMO labeling laws with a unified national standard. The new law begins to kick in in 2020 and will be fully mandatory by 2022. Unlike in other countries with GMO labeling laws, it does not require disclosures on the package, just a telephone number and a scannable code, such as a Quick Response (QR) barcode that would take shoppers to a website for more information.

Even manufacturers that choose to offer more details on the package will be subject to rules clearly intended to obfuscate rather than inform. For example, companies will use the term “bioengineered” rather than the more recognizable “GMO.” There are also a large number of exemptions that limit the number of foods that can be classified as GMO products.

This is “disclosure” only under the loosest possible definition of the term. The numerous drawbacks to online labels were thoroughly documented in a USDA study conducted by the consulting firm Deloitte in 2017, which was released only after the Center for Food Safety, a Washington-based advocacy group, sued the Trump administration. The findings were unambiguous: Researchers “observed key technological challenges that prevented nearly all participants from obtaining the information through electronic or digital disclosure methods.”

Even in the best of circumstances, online labels are comically inconvenient.

The first challenge for consumers was figuring out that they now had to scan a code to find the disclosures. “Digital links are not inherently associated with additional food information, and consumers often assume they are for marketing or industry use,” the report noted. Even in the best of circumstances, online labels are comically inconvenient. “It would take so much time, people are just not going to bother for most products,” says Bill Freese, a CFS policy analyst.

The report also cited Pew surveys showing that nearly a quarter of Americans do not own a smartphone, so they cannot easily scan the code. This cohort includes around a third of low-income Americans and over half of those 65 or older. Further, many shoppers, especially in smaller and more rural stores, lack adequate internet access.

“You can’t really improve on putting stuff on the [physical] label,” says Sharon Treat, a senior attorney at the Institute for Agriculture and Trade Policy, a research and advocacy group based in Minneapolis. “All of these other schemes are really not about communicating. They’re about hiding information.” Indeed, the food industry has a poor record on transparency.

Still, food industry lobbyists insist that this time around, they are trying to give more information to consumers, not less. “There’s a limited amount of real estate” on a physical package, says Food Marketing Institute (FMI) spokesperson Mark Baum. “There’s more on some than others, but when you get down to some of those smaller packages, there’s not much room at all.”

FMI has been pushing a voluntary disclosure platform they developed with the Grocery Manufacturers Association called SmartLabel, touted in press releases as a “universal solution” for providing transparency to customers. The platform, which can be accessed by scanning a product’s QR code or by navigating to its website, currently lists 47,000 products and receives over 1.5 million consumer visits per quarter, according to data provided by FMI. Baum notes that manufacturers could disclose more than 350 product attributes through SmartLabel, such as potentially allowing consumers to trace individual ingredients back to their country of origin.

However, a visit to SmartLabel’s website reveals that it is (at least so far) falling far short of those aspirations. For instance, Baum says Pepsi is one company doing a “particularly good job” of using the platform, but their signature soda’s pagecontains little information beyond what’s already on the can, other than generic descriptions of ingredients (don’t expect to find out what, precisely, “natural flavor” is) and promotional language touting Pepsi’s sustainability initiatives.

The new regulations technically prohibit advertising on a disclosure page, but Freese, the food policy analyst, is still concerned. “It gives [food companies] more control over the information that they provide. When you have a nutritional statement … that has to be on the label, that’s it,” he says. “You can’t try to spin that information and say, ‘Oh, sugars are really fine.’ But if you get a consumer going to your website to access that information, it opens up a whole realm of possibilities.”

The U.S. is the only country that is switching to an online-only labeling standard. Other countries’ labeling laws provide for more straightforward disclosures. In Chile, for instance, consumers don’t have to search the nutrition facts label to discover that a product is high in sugar or saturated fats—Chile requires the product to feature a black stop sign on the front alerting consumers. This, in turn, incentivizes food manufacturers to make their products healthier.

Consumer pressure could force food companies to adopt more on-package labeling, especially as the consumers pick up on the changes, even when it’s not required. Campbell Soup, for instance, began GMO labeling for its products in 2016. But Freese isn’t convinced that most companies will bow to consumers’ demands. “The whole idea of self-regulation is a contradiction in terms, because there’s a natural tension between a company’s desire to sell a product and have as much freedom as possible in what they include in the product, and requirements to disclose information that might not be flattering,” he says.

Meanwhile, Treat, the agricultural trade attorney, is particularly concerned that companies may try to sneak labeling regulations into trade agreements, which can supersede U.S. laws. In March, The New York Times reported that food industry groups had persuaded U.S. representatives renegotiating the North American Free Trade Agreement to try to limit junk food warning labels. “These companies have a preferred seat at the table,” she says. “It’s a very powerful way of basically putting a stop to future plans to make food labeling more informative.”

Ultimately, on-package labeling offers an immediacy and accessibility that a web page simply cannot match. “A so-called labeling plan that doesn’t actually have the information on the label [is] a contradiction in terms,” says Treat. “We have a very consumer-oriented approach to the world here in the United States, and this gives people information to make choices, and those choices can really influence the marketplace, as people do vote with their pocketbooks.”

The attacks on food labels make clear that Americans can no longer afford to regard them as the sort of no-brainer regulation that can safely be taken for granted. Of all the types of consumer products, food is perhaps the one with which people interact most intimately—it becomes part of our bodies. It is vital that consumers have easy access to comprehensive and accurate information about the foods they eat. Online labeling won’t provide that.

Samuel Breslow is an editorial intern at The American Prospect.