Palestinian prisoners have suspended their hunger strike in Israeli jails after eight days without food. 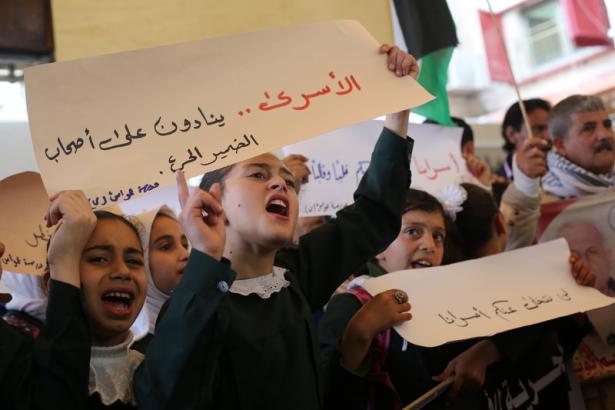 Following intense negotiations between the Israel Prison Service and the strike’s leaders, Israel reportedly agreed to the majority of demands set by prisoners.

The Israel Prison Service allegedly agreed to remove devices it had begun installing in past weeks that block phone reception in certain wings to prevent Palestinians from communicating with the outside world. The prison authorities also agreed not to install new ones in the future, according to prisoners rights group Addameer and the Palestinian Prisoners Club.

Israel said it would install four public telephone booths in every prison, “giving priority to sections of female and ill prisoners,” Addameer stated.

Palestinan prisoners will be permitted to use them three times a week for about 15 minutes.

Israeli daily Haaretz reported that the removal of the jamming devices and the installation of public telephone booths is conditioned on the prison service confiscating all mobile phones from prisoners.

However, an unnamed Israeli security official told Haaretz that the jamming devices won’t be removed, adding that the prisoners were told that public phones “will be installed only in cellblocks that have cellphone jammers.”

Palestinian prisoners have been demanding public phones in prisons for more than 20 years, Addameer stated.

The Israel Prison Service “opposed installing public phones in the jails due to Shin Bet objections,” but the Shin Bet, Israel’s secret police, changed its position because it would be “possible to listen in on calls from public phones,” according to Haaretz.

Israel also agreed to transfer Palestinian female prisoners out of Damon prison to one with better living conditions.

Damon is “characterized by its old, inadequate infrastructure, lack of proper sanitary services, of privacy and of basic hygiene needs,” according to Addameer, adding that it “was never an adequate place for human beings to live in.”

The prisoners were transferred from HaSharon prison to Damon in November as a punitive measure for refusing to go out to the prison yard, the only outdoor area they are permitted to use, in protest of prison authorities turning on surveillance cameras.

The surveillance cameras were one of the first implementations of repressive measures imposed by a newly formed committee headed by Erdan to worsen conditions for detained Palestinians and reduce their standard of living to “the minimum required,” including imposing water rations.

Living conditions at HaSharon are very difficult, with prisoners having to spend long hours inside cramped, humid rooms, which is bad for their physical and psychological health.

Medical services at HaSharon were also lacking, prisoners told Addameer, adding that the assigned doctor did not provide adequate care and that “the only treatment the doctor provided was to advise the prisoners to drink more water,” Addameer said.

Addameer reported that Israel agreed to return Palestinian prisoners who were transferred during recent raids, but Haaretz contradicted the claim, stating that Israel “rejected Hamas’ demand that prisoners transferred to other jails after last month’s riots at Rimon Prison be returned.”

Addameer said that Israel also agreed “to end the isolation of prisoners who were recently put in solitary confinement and to provide immediate medical treatment to sick and injured prisoners,” – a basic right that prisoners should not have to go on hunger strike to receive.

“It was agreed that things would return to what they were before the punitive measures imposed last year on the prisoners,” the Palestinian Prisoners Club stated.

Tamara Nassar is an assistant editor at The Electronic Intifada.