The union representing Sacramento teachers announced Tuesday it would hold a strike May 22, the second in as many months. 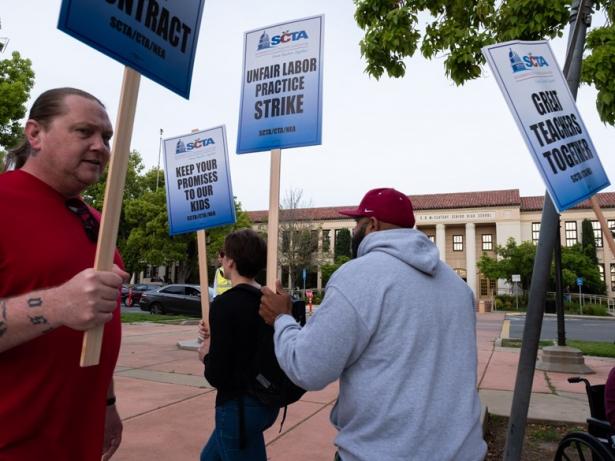 The union representing Sacramento teachers announced Tuesday it would hold a strike May 22, the second in as many months.

The Sacramento City Teachers Association, the union representing 2,500 teachers and employees, says the school district hasn't fully implemented a deal struck in 2017 that would have used savings from a new health care plan to fund better classroom staffing.

Teachers also held a one-day strike April 11 over the issue.

"They've ignored the main reason that we even had the strike which was to have the district honor the contract and the promises they made for students," SCTA President David Fisher said.

The Sacramento City Unified School District is facing a $35 million budget deficit and a possible state takeover, possibly next year.

In response to the SCTA’s announcement, Sacramento City Unified School District board president Jessie Ryan wrote that rather than striking, teachers and school administrators should come together at a scheduled rally at the Capitol on May 22, to demand more funding for public schools.

Superintendent Jorge Aguilar criticized the teachers for working against the district as it grapples with the budget crisis. “This strike will once again have a negative impact on our students, particularly those with the greatest needs,” he wrote in a statement.

Clarification: This story has been updated to reflect that Jessie Ryan's statement intended that both teachers and administrators take part in the march at the Capitol together. Nick Miller is an award-winning editor with more than 15 years of newsroom experience. Previously he was editor-in-chief of the East Bay Express in Oakland, and worked as an editor for 12 years at the Sacramento News & Review.