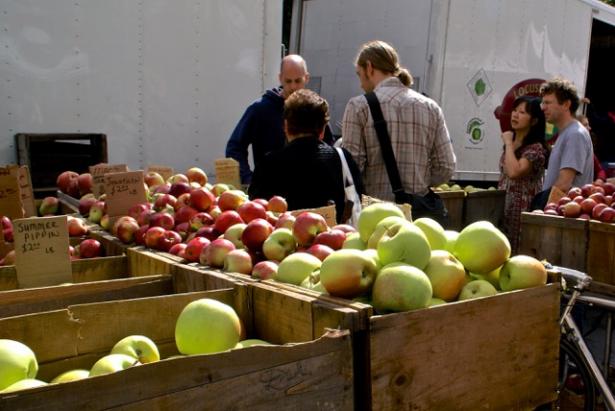 What‘s more nourishing or wholesome: something to keep us from doctors, to give to our teachers? , jeannetteferrary.photoshelter.com

WE CLIMBED the gray-slatted lookout tower as the lab bounded ahead, up stairs four at a time. Especially in autumn, after hiking the oak and beech woods of southern Indiana, my partner and I would stop for the color and sit in the window‘s ledge to gaze at russet leaking south.

I pulled two Pink Ladies from my bag and handed one to J. We sat quietly; only the sunk-tooth-rip chorus of bites punctured the fall air. Finishing my last mouthful, I noticed J held his own core between thumb and forefinger. You ate the whole thing, he said. And I had; I never wanted to bother with apple-trash and so plowed straight through the center, seeds and stem be damned. I nodded, took his from his hands, and swallowed its two woody bites. He kissed me. I don’t know how many Wednesdays went this way, walking the rolling Midwest hills, but always, someone brought apples.

J ate apples year-round, but I save up for their season. With seasonal eating, it’s not yet, more not yet, then: apples on apples on apples. I start my recipe machine, inventing ways to turn pecks into months of dishes. I‘ve served apples with stoneground mustard in a cheddar grilled cheese; spooned in warm maple compote over a stack of fresh crepes; stewed with steel-cut oats and walnuts; ribboned through French onion soup; shredded in radish-apple slaw; matchsticked with kohlrabi. I‘ve had apples tossed with fennel and kale; stuffed with wild rice and baked; crisped; pied; sliced, peanut buttered; diced in dense cream-cheese bundts; halved fat-ways to starry rounds; splayed on pizza; crisped into chips; roasted with parsnips for velvety soup. You name it, I’ve tried it, I’ve made it: ways to savor apples for every meal of fall.

It‘s no wonder this has led to some hubris, to the belief that I can always improve upon what I’m given. I’m not alone here: think digging canals and erecting levees, managing deer populations, engineering Styrofoam cups. Apple growers go to great lengths for higher yields or shelf life, perfect crunch or optimal sugars. They devote millions to fight scab, rot, mealy flesh, bruising skin. It can take a solo orchardist a lifetime to cultivate a grove of sturdy hybrids, predict ripening, and anticipate frost or fire blight, given humidity. Rarely can she enact her will; rather, she must observe and react. Act as an usher when bounty comes, but concede some disappointments.

Malus pumila, with nearly twice the number of genes as me, and a multi-millennial record of adapting, improving, and inventing behind it, has developed a reputation for sustaining and teaching us. What‘s more nourishing or wholesome: something to keep us from doctors, to give to our teachers? Even Apple named its first computers, portals to new worlds of information, “Macintoshes.” I‘ll often cut into an apple to find hypocotyls winding from its center like tiny springs, ready to jet the seed through into the dirt; it has all the sugar it needs. The future apple tree knows this package (cotyledon, seed coat, fruit) is the smartest way to start. It trusts the earth to provide.

As a girl, I recall thinking that if I ate enough, I could grow apples from my gut. The myth of apples continued past girlhood to a song the first boy I loved played me. In “New Year‘s Eve,” Golden Birds sings:

I’ll have extra air for you
Any time you start to drown …
I’ll bring you apple when your
throat is sore.

In my last five years at home, I’ve tried to provide more than apples, and, consequently, have ruined lots of dishes. Slices fanned out atop the custard had lemon juice on them to prevent browning, but it prevented eating, too. Hasselbacked fruit charred like slumped armadillos, which I pitched straight from sheet pan to yard. In trying to be ever more creative, generative, or useful, sometimes I’ve worn myself out: live-in caretaking for my father can’t keep the doctor away. Teaching college resume workshops can’t germinate roots for our Dreamers. Even fruit pies, J’s favorite, I could never ship.

The other day, in the third or fourth bite of a miso-caramel-apple pie, which she granted was delicious, my mamma said she was really craving just a plain old apple. And I paused, sort of startled. Bent down, and from the drawer pulled out one for her, one for me. Even the bruised, lumpy orb offered crisp flesh, a star of seeds. I swallowed a few in my surprise at just how cold, just how sweet—at knowing we can take a little poison, that it comes with what also might heal.