The bill would allow schools to fire workers for striking and withhold pay on strike days. 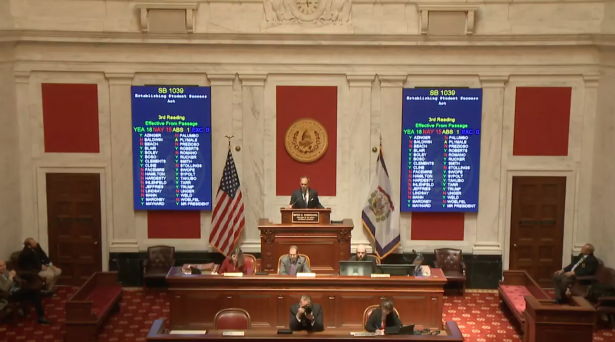 The chamber voted 18-15 to advance the measure — after Senate Republicans inserted an amendment during a special session Sunday that would ban public worker strikes, amid protests from teachers and workers in the chamber, the Charleston Gazette-Mail reported. The legislation also allows for an unlimited number of charter schools in the state.

Democrats, as well as the West Virginia chapter of the American Federation of Teachers, criticized the ban on strikes as retaliation for the teacher walkouts that took place earlier this year and last year. The bill would allow schools to fire workers for striking and withhold pay on strike days, as well as forbid county superintendents from closing schools due to strikes.

The legislation, known as the Student Success Act, now moves to the House of Delegates, which is scheduled to reconvene on June 17. It is unclear whether Gov. Jim Justice (R) will sign the measure into law should it reach his desk. On Sunday, he told the Metro News, “We’re at a very, very difficult impasse.”

Teachers protested at the state capitol all weekend. On Saturday, hundreds of teachers chanted, “Charter schools, no! Public schools, yes!” Protesters also singled out Senate President Mitch Carmichael (R), who has been a staunch defender of the bill and has framed it as the key to fixing West Virginia’s education system.

“We have been accused of not listening,” said GOP State Sen. Patricia Rucker during Monday’s floor debate, likely referring to teacher protests. “I have to apologize if I sometimes slip into teacher mode. But listening is not the same … as agreeing. We can listen and we can agree or disagree … I’m here to represent more than just the unions in West Virginia.”

Protesters also called the measure just another iteration of a bill the legislature killed in February.

In February, West Virginia teachers took to the streets in protest of a similar omnibus bill that would allow a few charter schools to operate in the state and allocate money toward private school vouchers. Teachers argued that charter schools could drain money from struggling traditional public schools, which are already largely underfunded. The two-day strike was successful, with the Republican-controlled House tabling the measure.

Last year’s strike lasted almost two weeks, focusing on higher salaries and better benefits, as well as concerns over staff vacancies and the state’s insurance provider. An agreement was ultimately reached to provide teachers and state employees with a 5% pay raise, a fivefold increase from the original proposed raise. That proposal, however, died with the February omnibus bill. Monday’s bill includes the 5% raise. West Virginia teachers are among the country’s most poorly paid, with teacher salaries ranked at 48th in the nation, according to the National Education Association.

“I get sick of hearing how bad West Virginia schools are,” said Sen. Randy Smith (R) during floor debate Monday. “This is a start … I feel we have to start someplace … We need to stop sitting on our hands … Starting over again isn’t the right thing to do.”